'Then & Now' at Albany Center Gallery

The current show at Albany Center Gallery http://www.albanycentergallery.org/ is fueled by irrevence, paranoia and obsession.

Then & Now is an annual variation on a theme, in which the gallery brings back one or more artists who have shown there in the past for an update. The 2009 version features three: Channing Lefebvre, Peter Leue and Terry Slade. (Full disclosure: I am on ACG's exhibits committee and was involved in the decision to place these artists in the show.) 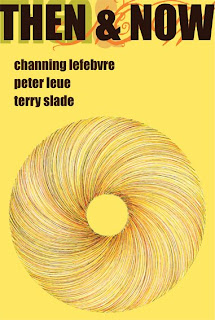 Though I was familiar with the work of all three artists before the exhibition, it still took me by surprise, particularly in the case of Lefebvre, whose 40 or so drawings in it are a remarkable investigation of markmaking and iconic shapes. (He represents obsession.)

Leue has provided comic relief with his "Brunhilde" and "Musical Chairs" sculptures that combine found materials with ingenious inventiveness and shameless punning.

Slade bridges the gap between the other two artists by showing both sculptures and drawings (wildly colorful, where Lefebvre's are more subdued) of real and imagined spores and viruses (there's your paranoia), as well as almost literally explosive constructions featuring luggage from loaded destinations (Gaza, Baghdad, etc.).

It is a show not to be missed, and it ends on Feb. 7, so shake a leg. This week's 1st Friday event will provide an opportunity to catch it before it's too late, but I recommend a separate visit to allow proper contemplation of the highly detailed work.
Posted by david brickman at 4:59 PM