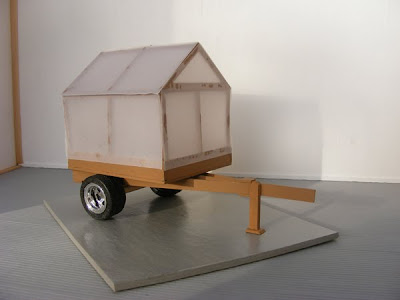 Greenhouse Trailer mixed-media by Michael Millspaugh
When I learned that Michael Millspaugh was slated for a solo show at the Lake George Arts Project's Courthouse Gallery, I was immediately excited. Here was an Albany-based artist of slowly building local reputation taking a strong step forward into regional prominence with a hard-to-get showcase at one of our area's most respected publicly-funded galleries.

Then again, there was a doubt: Millspaugh's shown quite a bit locally in the last year or two - would this be a retread not worth the trip up North? No worries - immediately upon my arrival at the always warm and welcoming space, I knew this was a terrific show. Millspaugh's almost unbelievable level of production ensured that, among the 77 items on the checklist (one of which actually comprises 97 individual drawings), there would be many, many new and valuable experiences.

Millspaugh is a perfect example of how a person can complete themselves through the creative process. In person he is shy, almost painfully so. In terms of technique, his art is quite unassuming, though extremely diverse and functionally sound. But his ideas are wildly audacious and abundant. 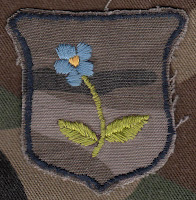 The topics Millspaugh alludes to include hunting, domesticity, gardening, childhood, the military, art itself, fishing, school, toolcraft, camping, and more. His media run the gamut from minutely scribed pencil on paper to painted wood carvings and life-size installation. Embroidery makes a solid appearance, as does the occasional painting on canvas; collage and cardboard constructions are also regular habits, and he uses plastic models of vehicles in wonderfully innovative ways.

In other words, Millspaugh is a virtual creative volcano. Of course, quantity doesn't make quality - but, again, no worries there. His ideas are strong, the execution understatedly elegant, and the body of work coheres nicely around certain core obsessions so you know where he's coming from.

How to describe that? One of his titles, Study for Homespun Camo Smocks for Clandestine Agrarian Action and Food Getting, in Woodland Patterns (the work consists of two or three G.I. Joe-sized cloth ponchos - or maybe they're Ninja suits) neatly sums up several conjoined Millspaugh-isms. My notes include the term "eco-terrorism," but it is inapt because Millspaugh's work, despite being unapologetically weapon-centric, clearly preaches peace.

There's a sense of the survivalist here, too, between the hunting-and-gathering concepts and those exploring personal dwellings (or hideouts), but it never enters the realm of the paranoiac or reactive; rather, this work always seems to be proactive, outward looking, quietly celebratory. 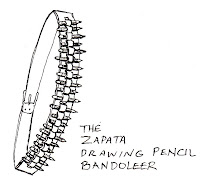 Case in point: A repeated motif of Millspaugh's is the beautiful pun he has created in the "Meadow Maker," a modified Enfield or Mauser rifle that spews garlands of flowers rather than shards of death. He has numerous variations on this theme in the show, mostly in drawings, but some are full-scale modified guns, such as the M14 Garden Hoe Conversion, which literalizes the Biblical injunction to beat swords into ploughshares.

Other items take this concept into the art realm, by installing a pencil in the working end of a rifle, and adding ammunition belts stocked with a range of drawing implements. Millspaugh also plays with dolls - re-creating them as alternative "action figures," or carving them from scratch in an appealingly primitive way.

Altogether it's witty, heartfelt stuff. I highly recommend it to lovers of art, politics, food production, toys, and the outdoors.

The show runs through June 11 and the gallery is just a few steps off the main drag in Lake George Village. 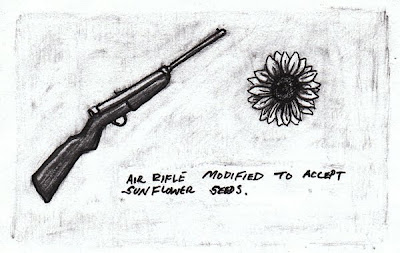 Posted by david brickman at 1:42 PM