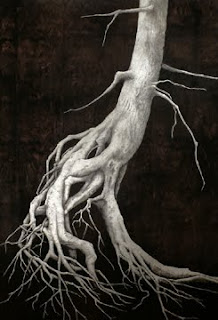 During my annual pilgrimage to the Lake George Jazz Weekend last week I had the opportunity to look in on Julie Anne Mann's Intrinsic Nature exhibition at Lake George Arts Project's Courthouse Gallery. The opening reception was in session, and an appreciative crowd sipped, nibbled, looked, and listened while Mann spoke briefly about her three distinct styles as represented in the show.

Mann is based in Brooklyn but hails from Seattle, and her Northwest roots are (literally) present in the major portion of the work, which depicts trees that have grown on top of "nurse logs" in the rainforest on the Olympic Peninsula (example at right above).

The way this happens is that a big tree falls in the forest, and other trees sprout on top of it, absorbing its energy into their own growth while sending roots down around it into the ground. After a long time, the nurse log decomposes, leaving mature trees suspended a couple of feet off the ground by their own exposed roots.

Mann, entranced by the gestural aspect of these trees and their metaphorical relationship to other life forms, has carefully rendered portraits of seven of them in hand-etched silver leaf on large walnut panels. She emphasizes that the images are copied from photographs that she has taken, making clear to those unfamiliar with the rainforest that they are not inventions.

The rich darkness of the walnut combines nicely with the reflective glow of the silver to make an image (really, almost an object) that compels close attention. Mann explained that there is no direct connection between the walnut and the trees depicted (they are evergreens), which is slightly disappointing, but the finished pieces are no less beautiful for it. 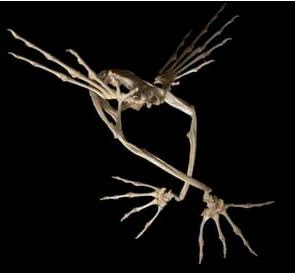 A second body of work does consist of objects - manipulated memento mori that Mann painstakingly constructs of small animal bones, insect wings, seed pods, and other materials, sets into black velvet-lined cigar boxes, and has mounted in a cluster on the wall (example above). Each suggests a previously undiscovered creature, and is given a fanciful Latin name to match its appearance. Mann’s inventiveness and sense of humor make this vaguely morbid display highly entertaining, and her skill and patience in building these tiny puzzles is impressive.

Equally meticulous is Mann’s third method, in which a squadron of dried Queen Anne’s lace blossoms have been hung upside-down in the center of the gallery to form a swaying, circular disc about seven feet off the floor. Below them, blood-red resin droplets have pooled, representing the legend of the lacemaker queen’s pricked finger.

Though the three styles of art Mann uses are disparate, they hold together through their consistent concerns with issues around nature and change. It’s a show well worth seeing.

NOTE: Starting with this review, I have instituted a new rating system. Because I rarely give space to shows I wouldn't recommend, the ratings will only be positive, ranging from Recommended to Highly Recommended to Must See. If I happen to review a show of doubtful worth, it simply won't be rated.
Posted by david brickman at 11:20 AM

Intriguing review. Thanks also for the rating system.
JoAnn Axford