Myth in Metaphor: The Etchings of Steven Hazard at Clement Art Gallery 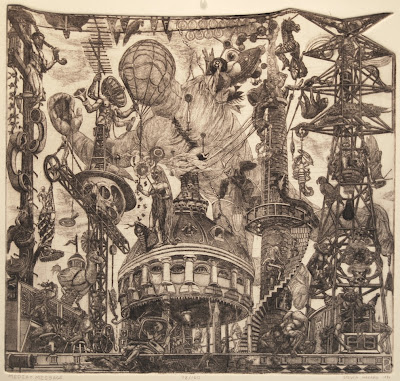 I don’t know Steven Hazard personally, but his show at Clement Art Gallery in Troy says a lot about what sort of person he must be. Like many artists, he is obsessed – but unlike most people, artists included, he appears to be singularly devoted to his obsession, giving his entire existence over to creating a very particular world in carefully rendered and heavily layered imagery.

At his home studio in Albany, Hazard makes etchings, which he frames himself and takes on the road to sell at craft fairs and such; these travels have allowed Hazard to make a living, but have largely prevented him from pursuing traditional gallery shows. Myth in Metaphor is the first local show I can recall that features more than just a few of his works.

So this is a welcome opportunity to take in the scope of Hazard’s output – especially because, despite the small scale of the gallery, it’s a comprehensive collection that spans from the 1970s to the present. Then again, for me the show is perhaps too complete – Hazard’s images are so dense that it is a challenge to take in very many of them at once, and the result is that the experience is somewhat overwhelming.

The show includes a great deal of text, most of it written by Hazard to explain the complexities of his ideas and images, some of it taken from other sources. One such quote says his prints “often represent the sensory overload ... of the modern world,” which mirrors my own reaction; I would add that they also draw from the ancient and medieval worlds to further populate this Bosch-like, crammed universe that Hazard so relentlessly depicts.

Apart from the many etchings on view (both framed on the walls and stacked unframed in bins), the show features several pencil drawings, which provide a bit of respite from the dark, layered prints. One of the drawings, titled Four Elements and dated 1999, provides the template for a same-size print also on view. At about 20x34 inches, it is large for Hazard and, being in graphite rather than ink, it is both lighter in tone and more richly detailed. One could spend hours just exploring this single piece in all its intricacy. 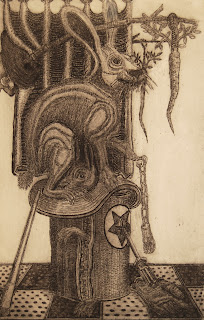 Another drawing, Article of Faith, is dated 2011 and features softer marks in a couple of colors on textured, grey paper. While its content is similar to the other work on view, it has a lighter touch, and its use of a rabbit as the main subject makes it more approachable than many of the more forbidding subjects presented here.

Those consist of the human figure, animals, mythological characters, machinery, architecture and landscape – sometimes all in one picture – and all of it elaborately staged to tell a story in actions and symbols.  The many black or brown single-plate etchings shown here are augmented by quite a few colorful multiple-plate etchings, as well as some lovely hand-colored etchings.

Hazard displays great skill with drawing, spatial perspective, and visual invention, and his well of creative ideas seems bottomless – but I find the technical quality of his prints to be wildly inconsistent: some are crisp and clear, others very muddy, and many are too heavily inked, which causes a lot of blocking up in the finer details. In work such as this, where it’s not just about the lights and darks, or the shapes and lines, but where every bit of information carries intent and meaning, that matters.

Note: Myth in Metaphor: The Etchings of Steven Hazard closes on Weds., Oct. 26, so you must hurry if you’re planning to see it; also, the gallery will publish a catalog of Hazard’s work by December, adding to the lineup of quality publications it has brought out for its artists over the past few years. 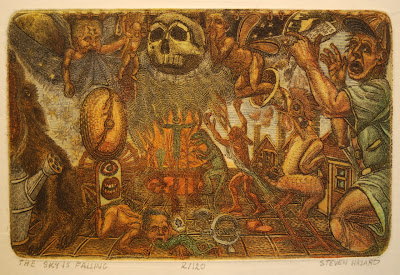 Posted by david brickman at 3:13 PM

anyone with an address for steve would be appreciated.. we were friends school and i have some early works.. my daughters were given artists copies as birthday presents.