Truro Light: A Journey from Ocean to Bay by Joseph Schuyler

The spirit of Joseph Schuyler, who died of cancer in January, shines brightly throughout the beautiful book Truro Light: A Journey from Ocean to Bay. Schuyler, a photographer based in Delmar, N.Y., was able to plan the book (his first) but, sadly, did not live to see it published. It's fitting that it tells the story of a journey, and that its subject is a place that held deep personal importance for Schuyler, the second-to-last town out on Cape Cod. 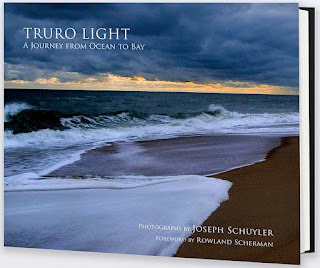 I knew Joe for a long time, so this will not be an objective review, but I can attest that some of my in-laws, who live on the Cape, were enthralled by his poetic vision of an endlessly beautiful natural world. In a succinct, punchy introduction, Schuyler says "my goal is for you to be able to experience for yourself the sense of this remarkable place," and he accomplishes that goal handily, but not without also imbuing our experience with the sense of how he sees and feels about his muse.

Schuyler's vision as a photographer has always been eclectic - he was widely known for work in black and white that recorded decades of productions by Albany's Capital Repertory Theatre, did catalog work, sold pictures to commercial stock agencies, and regularly exhibited fine art prints - and that is also true in this book. We see landscapes, nature details, architecture, and abstracts along the journey, and in a signature Schuyler touch, a lot of the pictures are taken in low light, rather than the blazing sun that draws so many to this ocean shore.

This journey is as much imaginary as real, more like the experience described by Thoreau than a contemporary trek, and it is very sparsely populated - people appear only tiny or in silhouette, roads are entirely absent, and the things we make show up in just a few of the photos. Even animals occupy a small place here, though when they do appear they clearly belong, such as a big green frog in a pond, and a quartet of naked nestlings, mouths agape.

What Schuyler captures best is the atmosphere, from foamy waves to misty marsh to limitless tidal flat, and the quiet that pervades these uncivilized locales. As we follow him on his journey, he stops to point out delights we may have missed - numerous shots peppered through the book present patterns in the sand, evocative cloud shapes, phenomena of light, reflections in the water. He delights in all things, and we can't help but share in that delight.

Schuyler also has a way with transformation - one of my favorite images (on the back cover of the book) shows a tidal pool at sunset, in which the pool appears to be a giant jellyfish hovering below the surface of the bay beyond. All the special qualities of the moment are captured with consummate technique in a picture that both embodies and transcends the subject.

Speaking of technique - it is always a topic when talking about photographs, but this book thankfully does not even bring it up. Suffice it to say that Schuyler was schooled and skilled in photographic art and technology, and he became a sought-after expert on SLR digital photography when it was still in its early phase (circa 15 years ago). I believe the pictures in this book are all from digital capture, and they use it to excellent effect, especially in low light.

One thing I love about Truro Light is that it also delves into darkness, but doesn't create a dark feeling. To some, this may make Schuyler less of an artist, but I respect the integrity of a person who remained true to his own quite sunny disposition and chose to present his world from that point of view. And indeed, the work is, as the title says, about the light in all its changes across Truro's mile-wide scope.

Schuyler spent 10 years taking these pictures and no doubt a lot of great shots had to be cut, but the structure of the book demands that each picture contribute to the overall flow, which is organized in sections (Oceanside, Inland, Pamet Harbor and so on). Not to nitpick, but I found it bogged down a bit in the middle, where a sequence of eight flower details seemed unnecessary (though still beautiful). Perhaps I was just too impatient to get to the other shore.

As I am writing this, I am in a cafe in the mid-Cape area. A local man sitting nearby was curious about the book, so I let him have a look. When he handed it back, he simply said he would be buying several copies, and would make sure the local library picked one up, too. I sure wish Joe had been here for that. If you want to pick up a copy, please support your local independent bookstore - it will be available there or (if you must!) at Amazon.

Wow. David I happen to be sitting on my front porch having just unpacked over the last hour from our yearly camping trip to Truro. Reading this blog and viewing the spectacular images from this artist was a nice way to settle into the evening, ready to get back to regular life tomorrow. Truro is a treasure but this artist has elevated the place to the dream state you have while visiting. I will certainly look out for the book. He left behind a wonderful legacy. G

Thank you for this wonderful retrospective on Joe's work on the Cape. The images in this book capture the quiet wonders of nature in Joe's masterful way and bring back memories (like Joe, I too spent many summers on the outer Cape). He will be sorely missed, but his body of work stands as a lasting tribute.