Recycled and Refashioned: The Art of Ruby Silvious at AIHA

It's no secret that the greater Capital Region has long been home to a rich community of visual artists. The reasons for this are many, including location, job opportunities, cost of living, and numerous colleges and universities with strong art programs being nearby.

Most of these local artists succeed at various levels, and some are well established in other markets (such as New York City), but it's rare that one breaks out in a big way - so when that happens, it's cause for celebration. I therefore commend the Albany Institute of History & Art for doing justice to our latest local hero, Ruby Silvious, with a terrifically likeable five-year survey of her work. I was lucky to have had the chance to visit Recycled and Refashioned: The Art of Ruby Silvious before the pandemic shut it down in late March, and I'm delighted that the museum, which has just re-opened to visitors, extended the show's run through Aug. 30, because this is a show literally everyone should try to see.

Like most successful artists, Silvious is incredibly hardworking, as evidenced by the striking quantity and range of the work in this show. But her impressive output doesn't come at the expense of quality - indeed, Silvious seems to get better the more she produces. So, while the number of works on view can be a little overwhelming (multiple viewings are advised), the repetition of many examples in her major themes serves to underscore the wonder of this artist's intensive daily practice. 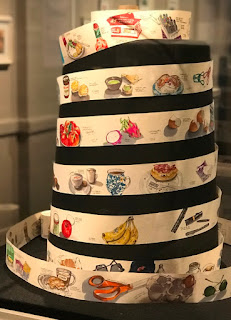 That daily practice itself is a unifying theme here, as is an abiding interest in clothing (hence the fashion reference in the show's title). While Silvious employs numerous techniques, including drawing in ink, painting in watercolor and gouache, printmaking, collage, sewing - and more - the re-use of materials is an overriding methodology in her work. In addition to the used tea bags that are her claim to fame, Silvious paints on eggshells, acorns, pistachio shells, paint chip samples, leaves, stones and, yes, even paper. She also refashions packaging material into origami bras and fanciful shoes, and combines hundreds of miniature monoprints into grand kimonos.

Perhaps my favorite item in the show (among more than 200) is a ziggurat-like coil of small daily illustrations, itself featuring more than 100 separate images, which was made by drawing on an old adding-machine tape. Like a journal, it neatly and humorously represents the artist's little pleasures and worries, often recording food items (it's clear Silvious likes snacks in addition to hot beverages) and sometimes augmented with wry comments, written in flowing block letters. As I circled this looping chain of charming notations, I was dizzied as much by their seeming endlessness as by the rotating motion of my path. 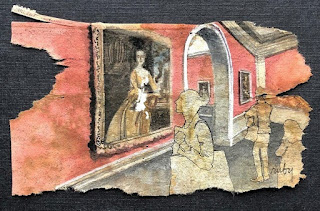 Another favorite element of Recycled and Refashioned is a display of 11 artist books that date from 2015 to 2019, in which almost all of Silvious's various approaches are represented, with a few added ideas that aren't in the rest of the show (such as embroidered thread drawings of female nudes). I'm a huge fan of artist books, and I love the way Silvious gives herself the freedom to use that medium any way she likes, even hiding one of them inside a used candy tin.

In the same small gallery with these books are 18 small framed tea-bag paintings on the theme of museum goers. These incorporate tiny renderings of famous works of art, as viewed by figures outlined in black ink. I couldn't tell for sure whether the little paintings were somehow copied (say by digital printing) or actually painted by the artist - but either way, they work to draw us in to join our miniature fellow museum goers. 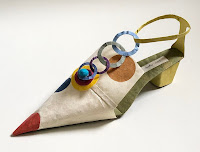 Though Silvious has omnivorous tastes in subject matter (I noted landscapes, architecture, other art, tea - of course, fruits and vegetables, flowers, birds, and people), her biggest obsession does seem to be fashion, and her biggest pieces in the show are full scale and (it seems) wearable, including two paper dresses and four kimonos. The origami bras number around 20, and there are 40 individual shoes made of paper, each a joyful explosion of feminine energy. 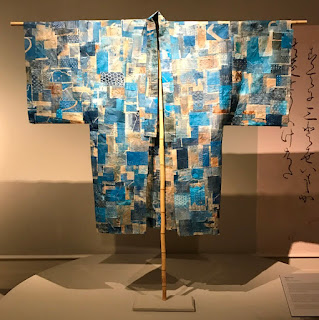 Still, the heart and soul of this exhibition is embodied in the paintings on tea bags - more than 60 in frames and more than 75 unframed in vitrines that I counted back in March. Additionally, it was recently announced that a series of 14 new tea bag paintings that Silvious made while under quarantine have been added to the show (and to the permanent collection of the Institute) since then.

There is a very nicely produced video in the first gallery that shows Silvious's process of making these paintings - from steeping the tea to the final multicolored work of art - and it brings home just how home-grown her art really is. The fact that it has carried her on fellowships to Japan, France, Italy, and all over the world in three published monographs, just shows how universally appealing this simple discovery became.

If it was just about the great ideas - re-using everyday materials, modifying junk-food wrappers, combining hundreds of prints into a kimono, or trimming a leaf with scissors - Silvious's work would be interesting. What makes it lasting is the strenuous dedication to craft, and the personal investment of her inner self that Silvious has brought to the unassuming process of making art from daily existence. This show represents a significant achievement by a local artist who's earned it. Let's celebrate that.

Posted by david brickman at 8:00 AM

Sounds fabulous, David ... And calls for my driving north from Kingston ... Thanks for the peek inside ... G

I also saw the show before everything got shut down but I will definitely return to see the new additions and revisit all of the wonderful work that Ruby has done over the years.

Thank you, David. I'm profoundly honored to be the recipient of such a fabulous review. Timing the release with the museum reopening was brilliant!

I need to get out more!