On May 2, my dear friend Joel Chadabe died at home in Albany at the age of 82. Joel was a groundbreaking electronic musician and composer who taught for many years at the University at Albany, Bennington College and, more recently, New York University.

I first met Joel in 1987, when we each were renting studio space in a renovated factory in Albany's West Hill neighborhood, and we soon embarked on a friendship that featured many facets: Technical support, creative discussions and collaborations, countless homecooked meals, and an extended series of annual New Year's Eve and Fourth of July parties at the home he shared with Françoise and Benjamin (wife and son - for more detail, see the Times Union obituary from May 9, and the New York Times obituary, which came out on May 26).

Those parties always featured a core group of the Chadabes' friends, many of them associated with UAlbany, but also often included visitors from afar. It wasn't unusual for several languages to be spoken in those evenings, and for subjects from dance choreography to theoretical physics espoused upon by actual experts. The evenings inevitably concluded with Joel at the piano and those bold enough singing songs both familiar and exotic. It was an experience of a time nearly lost to my generation, when friendship, creativity, and love of life seemed enough to conquer the world. 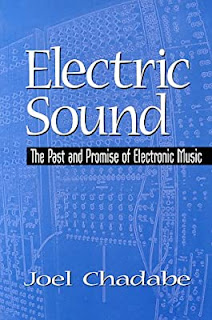 Throughout, Joel worked, shuttling back and forth from college to college and from Albany to New York City, where he always had some big project going on, whether a concert series, publishing venture, or recording studio. In 1997, he published an unassuming but seminal paperback book on the history of electronic music, Electric Sound, which I enjoyed immensely, despite my nearly nonexistent musical education. Joel loved sharing his knowledge and, especially, his enthusiasm for everything creative, and that attitude shone throughout the book.

In later years, Joel and I saw less of each other. He was often in New York, the old New Year's crowd was diminishing, so the parties ended, and I got busy with my own working life away from the arts. But the connection remained, and the sadness I feel from his premature departure is acute.

Joel Chadabe was truly one of a kind, a generous soul full of childlike joy, and he will be greatly missed. May he rest in peace.