Two exhibitions at the NYSM 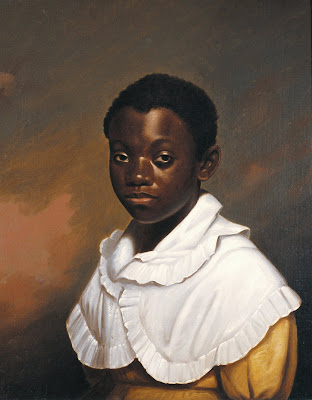 Black Child, 1815–1825 Phillip Thomas Cole Tilyard (1785–1830) Oil on canvas
I was initially disappointed by the exhibition Through the Eyes of Others: African Americans and Identity in American Art at the New York State Museum in Albany - but then I was annoyed. Like a number of recent exhibitions I've seen, it has elements of being of or about art, but its overriding purpose is as a history lesson. This would be the source of my disappointment (after all, it is part of the Bank of America Great Art Series, which has brought us many fabulous shows over the years that were all about the art); the letdown was made sharper by my high expectations for anything that comes out of the Fenimore Art Museum in Cooperstown.

So what about the annoyance? Here it gets trickier. The show's agenda, as organized and labeled by Cooperstown Graduate Program Director Gretchen Sullivan Sorin, is to explore "the complicated issues surrounding race in American culture as seen in paintings and sculptures from the 19th and 20th centuries" and thereby "to start the conversation [about race] anew." While I'm all for that (and am on the public record saying so), I went away rather uncomfortable with some aspects of Sorin's approach. 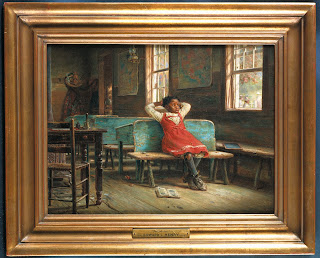 On the plus side, she asks a lot of questions. But those questions are often presented as if to a child and, though the NYSM is an educational resource, even kids know when they're being pandered to. Equally, there is a heck of a lot of 21st-century spin going on here - ironic, I think, when what is being considered was 19th-century spin.

So a less than perfectly groomed young black girl, depicted in what seems to me a rather sympathetic light by the popular and skilled 19th-century painter Edward Lamson Henry, is described as rendering "African Americans as less than equal to white Americans" by virtue of their "tattered clothes, [bare feet, or ] ... thick knots of uncombed hair." (An example, titled Kept In, 1889, is shown above at right.) The fact that Henry's depiction is probably rather accurate does nothing to deter the curator's interpretation that it is now appropriate to view it as demeaning or distasteful.

Many ambiguities of this sort populate the exhibition. In the part of the show dominated by caricatures of black subjects is a mass-produced sculpture that shows a white girl teaching her black "Uncle Ned" how to read - the title of Uncle is described as emphasizing inequality. In another room, where we are meant to see a more uplifting perspective on black subjects, a portrait titled Aunt Effie is praised as giving a "dignified" presentation of its subject, with no complaint about her unequalizing handle.

Several examples of recent art by black Americans do a fine job of addressing these issues without becoming either strident or confused, including Kyra Hicks's quilt Black Barbie; a strong mixed-media piece by Whitfield Lovell; and a typically subtle and elegant work by Lorna Simpson. I also especially liked Faith Ringgold's quite large 1967 painting titled U.S. Postage Stamp Commemorating The Advent Of Black Power (which depicts a few dark faces among a sea of white ones), and was glad to see a 1964 Norman Rockwell lithograph titled The Problem We All Live With, which could have been deconstructed or even ridiculed but is presented at face value as a positive statement about the shared white and black struggle for civil rights.

A possible answer to these questions comes up in another exhibition at the NYSM, titled This Great Nation Will Endure, which consists of a great many wonderful photographs from the unforgettable FSA (Farm Security Administration) era of 1935-1942. This traveling show was organized by the staff at the Franklin D. Roosevelt Presidential Library and Museum in Hyde Park, and it celebrates that almost ridiculously talented group of FSA photographers with 150 very good prints made from Library of Congress negatives in 2004, and extremely informative wall panels about each of the photographers included.

They range from the super-famous (Walker Evans, Dorothea Lange) to the known-if-you-know-about-that-sort-of-thing (Russell Lee, Marion Post Wolcott) to the nearly unknown (Carl Mydans, John Vachon), but each has photos worth viewing and a story worth learning. The show makes a focal point of Lange, whose iconic Migrant Mother is presented very large here - but it also provides many strong moments from such greats as Arthur Rothstein, Ben Shahn, and Gordon Parks (whose 1942 Government Charwoman is shown above at left).

Parks, the only black photographer in the bunch (who went on to direct the seminal Blaxploitation movie Shaft) is not the only one to present images of blacks in this exhibition - so it offers a nice opportunity to ask some of the same questions that Sorin poses. Is his charwoman a stereotype (notwithstanding her purposeful resemblance to the wife in Grant Wood's American Gothic)? Would she be one if the photographer had been white? What about the other photographs of blacks made by whites (some of whom were Jewish)? What about the stereotyping or exploitation of poor people of any color in museum-quality art?

Yeah, Through The Eyes bugged me, and I couldn't put my finger on it, though there were pieces that were more on point than your example.

Good to have you back on the blog, and this is a very acute analysis. I was bugged this summer at the NYSM's Henry Hudson exhibit about all the tendentious kiddie-speak.
As Eliza says in My Fair Lady after Freddy sings the wonderful "On the Street Where You Live," "Words, words, words, I'm sick of words." But not yours.