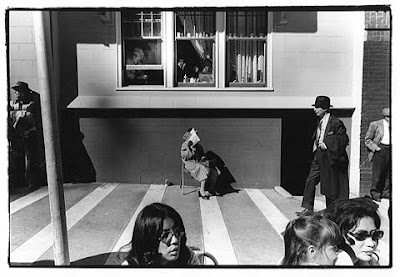 Geary Street, San Francisco, 1974 gelatin silver print by Dona Ann McAdams
The final exams are over, and the grad student is back to blogging - just in time to talk about an almost absurd abundance of important photography shows going on right here in the fair city of Albany. They include Keith Carter at The College of Saint Rose's Massry Gallery through Jan. 17; a large group of Depression-era photographs at the New York State Museum through March 14; and Berenice Abbott, also at the NYSM and now extended through Jan. 3. I wrote about the Abbott show in an earlier post, and will weigh in soon on the other two.
But first up is Some Women, a solo show by Dona Ann McAdams at Sage College of Albany's Opalka Gallery through Dec. 16 (note: the show was originally scheduled to end on Dec. 11 but has been extended). A collection of 35 gelatin silver prints from 35 years of photographing (mostly) in the street, Some Women is both a personal retrospective and an homage to street photography itself; the title is a purposeful evocation of a very influential book from that genre's heyday, Women are Beautiful by Garry Winogrand, whose work McAdams' sometimes very much resembles.
McAdams' work can also look like that of Henri Cartier-Bresson, Robert Frank, William Klein, and Lee Friedlander - comparisons that I imagine have already been made many times, and that I trust will not bother her in the least, because they are both apt and instructive. At any rate, the resemblances don't diminish this work one bit: it is, honestly, just as good as that of those great earlier photographers, and - most important - has its own clear voice.
McAdams is a fun study, because her work crosses so many boundaries and mixes freely from 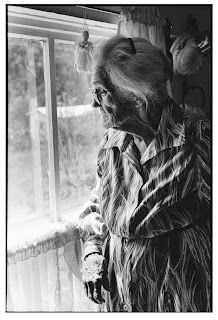 contrasting sources. First, there is the nostalgia of her traditional, rigorous 35mm black-and-white technique, right down to the 12" x18" darkroom-made prints - in this digital world, we don't see much of that anymore, and it is still refreshingly direct and visually rich. Second, McAdams is extremely politically engaged - yet, thankfully, her work does not put you off with strident messages.
Like all the sincere (I hope) documentarians whose shoulders she happily straddles, McAdams records the world as she experiences it, which in her case means with great sensitivity, clear-eyed passion, a healthy sense of humor, and a very open mind. I expected feminism from this show, and McAdams is most definitely an unapologetic feminist - but not of the sort you worry about running into at a cocktail party; rather, she quite honestly and convincingly portrays women and girls, some of whom are involved in political acts, but most of whom are simply living their lives the best they can, and nearly always looking enchanting as they go about their business.
The range here is impressive, from innocent tots to performance artists, prostitutes to nuns. In a few cases, there is no female person visible in the shot - one shows a well-lived-in room where photo portraits are the only concrete presence of humans; another depicts a crowd of well-dressed young men on Bourbon Street in New Orleans during Mardi Gras - we follow their interested gazes upward and understand they must be watching a woman on a passing float, presumably in some flagrant display of her charms.
But the rest are quite direct - many of them are portraits, always affectionate (like the one above at right), and many are chance encounters that share the pathos of the situation before the camera (such as the image at the bottom of this post). With these, the gallery has added to the fun by creating telling juxtapositions, such as placing a somewhat chaotic Barcelona street scene in which a couple appear at first to be dancing, then to be fighting, next to an equally off-kilter shot from New York City in which women of various shapes are dressed for a Carnaval- 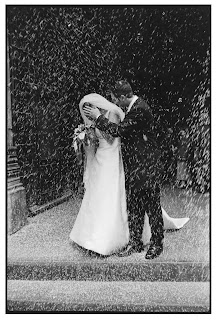 style parade, their gazes going every which way like those of the bystanders in the Barcelona scene.
That pair is also side-by-side in the accompanying catalog, which reproduces in good black-and-white every picture in the exhibition. It's a nice little book, and a fitting throwback to the days when photographers regularly produced this sort of ephemera (I'm talking about the '70s and '80s, when printing was pretty affordable), and when McAdams did, too - a display case in the entry area of the gallery shows off six or eight of her artist book efforts from that time.
Some of the other pictures in the show are set-up circumstances, not my favorite approach in general, but here they work: a dozen barechested women lined up on a too-small roll of studio paper, each holding a sign in front of her breasts that says either "porn star" or "feminist"; a trio of women jugglers in everyday attire performing in front of a nuclear power plant; a Spanish wedding couple being pelted with a blizzard of rice.
The one photo that seems out of place in this selection is of the multimedia performer Meredith Monk onstage - though McAdams is known for her pictures of performance artists in action, this theatrically-lit shot lacks the subtle shades of the rest of the work in the show. I guess it was just too hard to resist including something from that series.
Aside from having been extended, this exhibition will have a special guided tour by McAdams at 7 p.m. on Friday, Dec. 4, and the artist will also be present for a screening of the film Guest of Cindy Sherman (in which she appears) at 7 p.m. on Wednesday, Dec. 9. These are both good opportunities to go and see a really great collection of work. 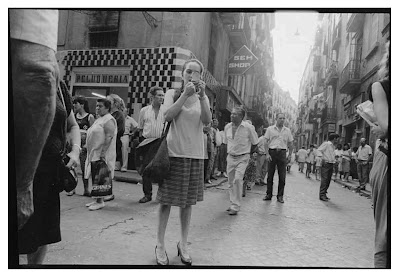 Posted by david brickman at 4:48 PM