The Perfect Fit and Old Soles at AIHA 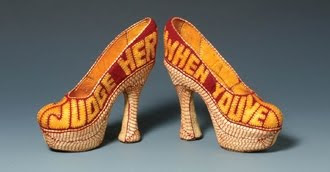 Based on publicity photos for The Perfect Fit: Shoes Tell Stories at the Albany Institute of History & Art, I went there expecting to see shoes as art, and art as shoes - but I was not prepared for the additional quantities of complex art about shoes that the traveling show also includes.

Organized by the Fuller Craft Museum in Brockton, Mass., which was once a shoe-factory town, The Perfect Fit is the type of show that reminds us of the large role traditional craft media now play in contemporary art. The Institute's three small upstairs rooms are stuffed with work by a geographically diverse selection of artists, all of it produced between 2004 and 2008 in almost every conceivable material.
Just so you get the idea, here's a partial list: silk, glass, ceramic, wood, wire, quilted fabric, painted fabric, beads, papier mache, embroidery, doll parts, bicycle parts, tools, precious metals, origami, handmade paper, recycled milk jugs, soil, honeycomb (yes, actual honeycomb) and canary eggs. And, of course, video - pretty darn bad video, at that. 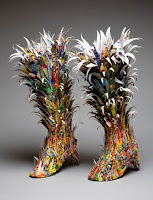 Among the actually shoe-like creations, one lovely pair (by Jan Hopkins, shown at the top of this post) is crafted from grapefruit and cantaloupe peels; another exuberantly unwearable pair of boots (by Rebecca Siemering, shown at right) is entirely made of discarded scratch-off tickets.
Further expanding the media included are a pair of fake-fur-and-blown-glass telephones (the handsets are ladies pump-shaped) by David Fox; a sound sculpture featuring a wide fan of 416 bronzed baby shoes by Judy Haberl; and an elegantly cut, black-paper silhouette accordion book by Beatrice Coron. 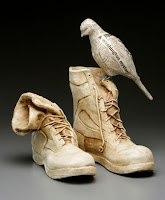 A number of pieces make painful reference to the Chinese foot-binding legacy; others are equally humorous and lighthearted. Among the more fully-realized works of art are Nina Fletcher's Shoe Wheel, a mandala of discarded black pumps joined in an endless cycle, and Ito Horotoshi's Morning of the Snow Fall, a remarkably illusionistic sculpture in granite and marble of a pair of boots toeing some of the freshly fallen white stuff.
The most touching work of art in the show for me is Abby's Shoes, a tableau by Lissa Hunter of several framed black-and-white photos (rendered in paint and wood), sitting on a plaster shelf along with two tiny woven slippers. The accompanying text details a Korean two-year-old's adoption, and her subsequent sad attachment to the memory of her first pair of shoes, which she regrets having thrown away. This piece is on another level compared to the work in the show featuring complaints about shopping and fit.

After viewing The Perfect Fit, you are sure to see the art in many of the more than 60 pairs of shoes from the past three centuries featured in Old Soles, an accompanying vitrine exhibit taken from the Institute's collection.
Old Soles covers a satisfying range of examples in wood, leather, silk and so on, including a terrific pair of Frye-ish child's boots from the 19th century, that amazing silver pump shown above at right, and the silk slippers shown below, dated 1916.
Both shows end on Jan. 2, so you'll have to hurry.
Rating: Recommended

Posted by david brickman at 4:10 PM