Not Just Another Pretty Place: The Landscape of New York at NYSM 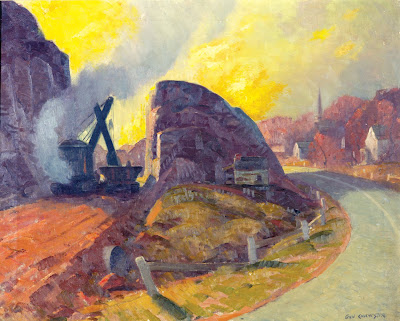 The Cut oil on canvas by Cecil Chichester

Most of us wouldn't immediately think of the New York State Museum as a place with a major art collection - after all, its mission targets education, and its most prominent permanent exhibits focus on topics such as history, anthropology, ornithology, and geology. Well, it's time to reconsider that notion, as the wonderful survey exhibition Not Just Another Pretty Place: The Landscape of New York features more than 100 works of art, many of them first-rate, and all of them taken from the museum's collection.

The exhibition, which opened in early September, fills the facility's large West Gallery and is organized under four themes: Recording, Romanticizing, Utilizing, and Imagining the landscape of New York. Within each of these major themes are a number of sub-themes, all of which are clearly and concisely explained on monochromatic wall panels. The overall design of the show and text panels is very well executed and user-friendly, with the exception that it is at times difficult to figure out which theme a sub-theme belongs to.

At the entry to the exhibit is the "Recording" section, which emphasizes the physical features of the New York landscape, and includes one of my favorite pieces in the show, a multicolored "textural" rendering of the state by the Geological Information Survey's computers. Other examples from this section are "Bird's Eye Views" that detail the layout of towns such as Jamestown, as rendered by a 19th-century lithographer; images of the industrial landscape as shaped by the abundant presence of lakes and rivers in New York; quaint house portraits ("The Domesticated Landscape"); and a sub-section titled "Capturing New York on Film" that includes a nifty group of 12 color lantern slides laid out on a backlit pedestal, and a jarring video presentation of some of the countless frames taken by the state every few years to document all 16,000 miles of New York's roads at the rate of 100 shots per mile.

The "Recording" section also includes the largest piece in the show, a painting about 20 feet long that depicts in an ever-so-slightly naive style the arrival of scores of tall ships in New York Harbor during the nation's bicentennial celebration in 1976. The most prominent vertical feature in this frieze-like tableau are the twin towers of the World Trade Center - a sobering reminder of our more recent history, and of the thought that 1976's cheery optimism can probably never be recaptured. 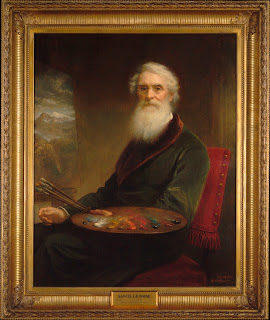 Next comes the "Romanticizing" section, where artistic expression takes on a central role. Here, the Hudson River School is prominently represented by a special zone dedicated to the Albany painter Asa W. Twitchell, and several other examples, the best of which is a dramatic and vividly detailed watercolor by Jasper Cropsey (reproduced at the bottom of this post).

Tourism is examined in the "Utilizing" section, which includes a wonderful two-sheet lithograph of Blondin Crossing Niagara Falls for Lloyd's News, as well as a sub-section on cityscapes that features many enjoyable surprises, such as pastoral views of the Flatbush and Bushwick sections of Brooklyn before they were citified, a village-like State Street, Albany, 1805, and two really nice examples of printmaking: Fairfield Porter's 1960 lithograph titled Sixth Avenue II, and a richly colored, geometric 1980 aquatint with a glowing, white Citicorp building by Kathleen E. Gallagher.

A related group of pictures from the sub-section "New York as Seen by WPA Artists" hangs nearby. The six included are outstanding examples selected from a large and ever-growing collection of such work that the NYSM began acquiring in 1943 (one is reproduced at the top of this post).

Also in the "Utilizing" section is a sub-section called "Embellishing the Landscape," which describes the 19th-century interest in elaborate gardens and shows fine examples of the type of wrought-iron fencing, bench, and decorative vase that such gardens might incorporate; a "rustic" bench, made of natural wood and perhaps meant to be placed along a woodsy path, is also included. These and other objects in other sections enliven the exhibition with their concrete three-dimensional presence.

The final section of the show, "Imagining," stretches from decorated plates and furniture to a posthumous portrait of the painter and inventor Samuel F. B. Morse (shown above at right), and also includes a dreamy Thomas McKnight silkscreen of a moonlit New York City under a blanket of snow. The show concludes with a sub-section titled "The Landscape of Memory," which introduces the art of Frank Eckmair, whose woodcuts are the focus of another current NYSM exhibition of the same name. I will review that show (which runs through next fall in the Crossroads Gallery) in a future post.

Not Just Another Pretty Place: The Landscape of New York continues through March 3, 2011. 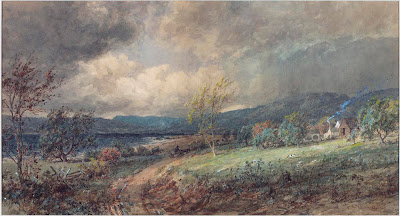 Storm Across the Hudson watercolor 1883 by Jasper Francis Cropsey

Posted by david brickman at 1:24 PM