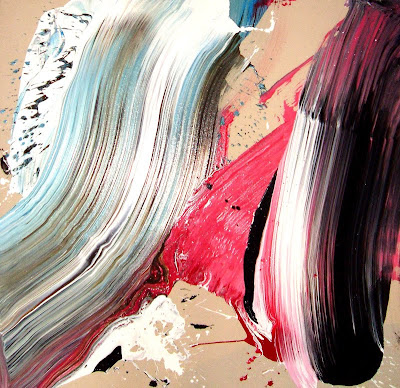 I went to see African American Abstract Masters at The Sage Colleges' Opalka Gallery expecting a history lesson - and I got one - but I was delighted to find that the history this show covers goes all the way to the present. 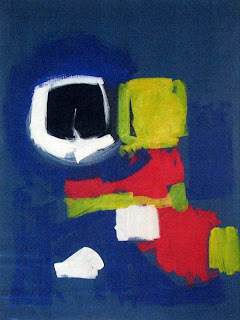 The Opalka has presented important shows of AbEx artists throughout its tenure, one of which was a solo a few years ago by Frank Wimberley, who has two pieces in this exhibition (including the one shown at right). That kind of continuity and adherence to a mission is nice to see in a college gallery, and we're lucky to receive the benefits of Gallery Director Jim Richard Wilson's deep and long-term interest in this vital segment of American painting.

African American Abstract Masters was curated by Mary Anne Rose and organized by Anita Shapolsky Gallery and Wilmer Jennings Gallery at Kenkeleba, both of which showed the work last spring in New York City. The current installment of Rose's choices features 14 artists, nine of whom are represented by two works each; of the rest, one has three pieces and four have just one in the show, making a total of 25 pieces dating from 1949 to 2009.

The broad time frame of the works included, and the many pairings (most of which bridge decades), affords wonderful opportunities to compare and contrast the evolution of painting styles, both in general and by individual artists. For example, Ed Clark's two pieces are dated 1978 and 2009 (the latter is shown at the top of this post), yet they are of similar scale, share the same medium (acrylic), and are both made with sweeping strokes of a pushbroom-sized brush. Even so, each has the feel of its particular time. 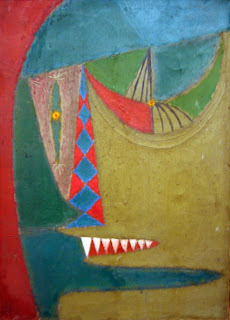 Conversely, Joe Overstreet's two paintings, also 30 years apart, could have been made by two different artists - the one from 1960 is loopily colorful and energetic, while the one from 1990 is in black and white and has strictly constructed geometry. Yet Overstreet can't be accused of inconsistency - each of these paintings ranks among the strongest pieces in the show.

Not all the work in the show is purely abstract. The earliest piece, Harlan Jackson's Mask No. II (from 1949; shown above at left), has the primitive art and rituals of Haiti as a source, and is properly placed in time at the apex of American painting's transition from Surrealism and Cubism into Abstract Expressionism. It reminded me of work from the same period by Jackson Pollock, before he launched into the drips, and truly reflects the roots of the AbEx movement.

Other transitional work in the show includes the Theosophistic 1953 Composition by Thomas Sills and Betty Blayton's two pieces, Forced Right (from 1975; shown at the bottom of this post) and Riot (from 1967), which have figurative references. Blayton is one of just two women in the show - hardly surprising, considering the time and context. While it was surely pretty difficult to make it as a black artist in the '50s and '60s, it was equally tough to make it as a woman painter in the macho world of Abstract Expressionists - so for a black woman it had to be nearly impossible. 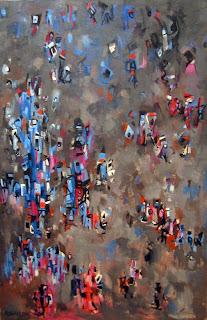 The other woman, Alma Thomas, is represented by a watercolor, one of the few works on paper in the show. Hers is a muscular but muted study in red and black that has a nice dialogue going with a similarly sized piece opposite it that is one of the show's unqualified gems. Titled Study in Black and White, this gouache on paper is by Sam Middleton - but it could just as easily be by one of his far more famous contemporaries (say Motherwell or Gottlieb). No wonder it is part of the curator's personal collection.

Other notable works in the show include an outstanding Norman Lewis painting (shown above at right); the two Wimberleys (also about 30 years apart and providing a thought-provoking contrast); and the only print in the show, a sweet piece by the genius lithographer Robert Blackburn titled Faux Pas.

It's not too late to see African American Abstract Masters, but don't delay - the show ends on Dec. 12. 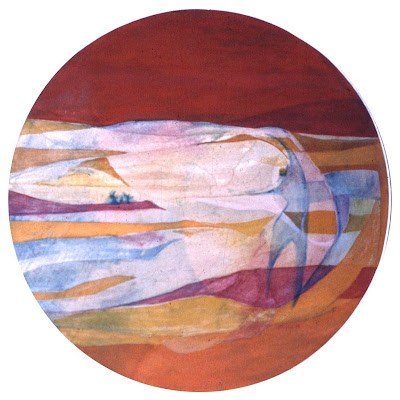 Also involving compelling abstract art, an exhibition at The College of Saint Rose's Esther Massry Gallery by Creighton Michael will have its artist's reception as part of the 1st Friday events for December (from 5 - 9 p.m. on Friday, Dec. 3). Michael, who will speak in nearby St. Joseph

Auditorium on Friday at 7 p.m., uses three-dimensional "marks" to create works that range from wall-mounted squares of small objects to a room-sized installation - all of which he refers to as drawings.
Tangible Marking: The Dimensional Drawings of Creighton Michael opened on Nov. 14 and will continue through Jan. 23, when a special music performance related to the show will take place in the gallery.
For more 1st Friday information, click here.
Posted by david brickman at 4:30 PM