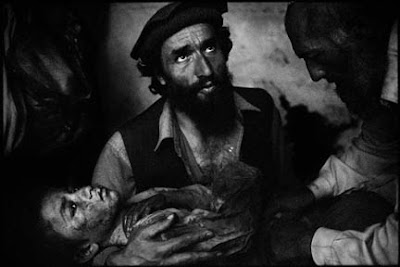 It's as though the International Center of Photography opened a branch in Troy. The exhibition Battlesight: Dispatches from Iraq and Afghanistan by International Photographers is that good, and that important.
Curated by Timothy Cahill, director of the Center for Documentary Arts at The Sage Colleges, and hosted by the Arts Center of the Capital Region in Troy, Battlesight presents the work of three very diverse photographers who share a common subject: War. Cahill introduces the show by explaining that we live in a time in which there are few mass-media outlets for such images, as opposed to the Vietnam era, when the war was brought into everyone's living room by magazines such as Look and Life and by the evening news on TV.
His point is that we are disturbingly unconnected today to 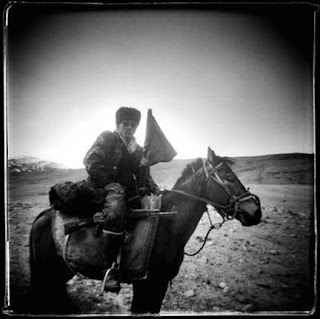 the devastation being wrought in our names with trillions of our dollars, and that this represents a culture out of balance. Aside from the obvious question of whether the work of these (or any) photographers being shown in an art gallery (or anywhere else) can change that balance, one must acknowledge that our time is nowhere near as innocent as the '60s started out, and that people these days are more and more difficult to reach - that is, to move emotionally - with pictures (or anything else).
But it's certainly worth trying. And these three - if nothing else - represent a deep commitment to doing that without fear, year after year. Cheryl Diaz Meyer, Balasz Gardi, and Teru Kuwayama are excellent photographers and have each won many well-deserved awards. By bringing them together, Cahill has created a different context for their work than you would find in a book or magazine - and that is part of the reason this show matters.

Rather than comment on the content of the work, which most viewers will have no trouble understanding and interpreting on their own (and which is evident in the examples shown with this post), I'd like to point out some of the less obvious aspects of the exhibition and its trio of participants. 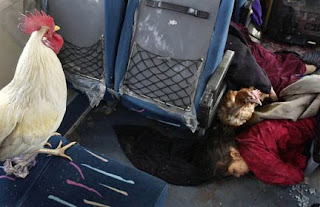 First, there are three distinct sensibilities at play here. Diaz Meyer, who won a Pulitzer Prize while working for The Dallas Morning News, is the traditional "objective" reporter, taking relatively uninflected pictures and putting them together to tell a journalistic story. Gardi, a Hungarian freelancer, comes from the grand European tradition of humanistic photography made popular by the Magnum agency; his work is clearly meant to be allegorical. Kuwayama, a graduate of the University at Albany, uses equipment and techniques more generally associated with artistic photography, and fulfills that promise by offering works that lean toward self-expression.
The statements made by each photographer support these distinctions. Diaz Meyer's emphasizes courage (a totally straight-ahead American take on reporters and soldiers doing their duty); Gardi's emphasizes the desperation of his marginalized subjects (who are presented as deeply - and universally - human); and Kuwayama's emphasizes his own various journeys, projects, and ongoing exploration (essentially casting him as the traveling seeker of meaning). 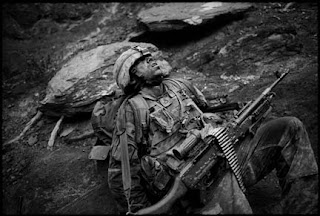 Cahill, as curator, is the fourth wheel - his selection, choice of print size and framing design, and overall installation of the exhibition add up to a uniquely orchestrated experience of this particular set of sensibilities. It is (I believe) his first attempt at organizing such an exhibit and, while not perfect, it is quite a successful effort. The viewer is taken on a ride into difficult territory and emerges at the end still whole yet subtly, perhaps imperceptibly - but definitely - changed.

Battlesight: Dispatches from Iraq and Afghanistan by International Photographers is on view through Dec. 19. There will be a second reception for the show during this Friday's (Nov. 26) Troy Night Out from 5 - 9 p.m.

Balazs Gardi - An Afghan man holds a wounded boy in front of a house in Yaka China village, Korengal Valley, Kunar Province, East Afghanistan, October 20, 2007. The boy received several shrapnel wounds from a rocket as a U.S. air strike targeted a suspected insurgent position in a nearby house the previous night. The air strike killed five other civilians and injured at least seven villagers including children.

Teru Kuwayama - The ruins of Kabul. Following the retreat of the Soviet Army, internecine fighting between rival mujahideen factions leveled the city and displaced millions. 2002

Cheryl Diaz Meyer - Mini Bus - Corpses of children lay in a pool of blood in a minibus at an intersection near Hatif Haiyawi, an area loyal to Saddam Hussein, during the Second Tank Battalion's advance on the outskirts of Baghdad. Controlling civilian movement left numerous deaths as Marines responded to suicide bombers, soldiers posing as civilians and other ambush tactics. April 5, 2003

Cheryl Diaz Meyer - Dust Storm - Marine Staff Sergeant Brian Flaherty of New York, Delta Company of the Second Tank Battalion, disconnects a fuel bladder from a tank as a dust storm rages in Southern Iraq. The move north toward Baghdad was one of the most aggressive tank road marches in Marine history. March 25, 2003. 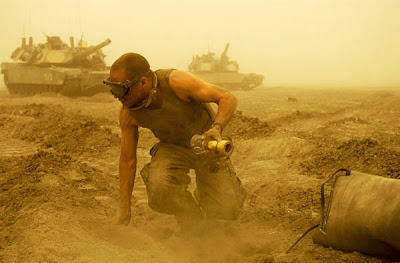 Also of note: Two other important exhibitions of photography are on view in Troy, and both will be part of the Troy Night Out festivities: Autobiography, featuring the work of Nicholas Walster and Susan Bartoldus, has been extended by the Photography Center of the Capital District through the weekend; and Iceland Landscapes by Michael Marston will have its artist's reception on Friday at Fulton Street Gallery (it runs through Dec. 4). I recommend both.

Thank you David. I saw the show on Sunday and was taken with its power and assertion of the value of still photography to convey significant human experience. It is a powerful show of very high caliber.

I'm not sure we're unconnected as much as we're feeling HELPLESS about the destruction done in our names. I actively protested that war in Iraq, to no particular effect.