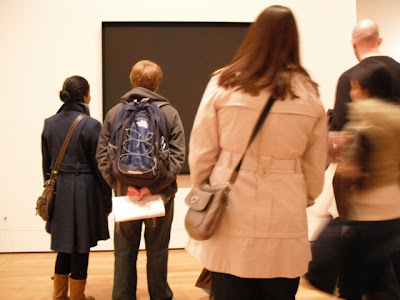 Museum of Modern Art patrons view a black painting by Ad Reinhart at Abstract Expressionist New York
It had been a long time, but I finally made it to New York City last weekend, partly to catch the AbEx show at the Museum of Modern Art before it ends (which will happen on April 26).

Formally titled Abstract Expressionist New York, the show occupies several large galleries in the painting section of the museum and is made entirely from MoMA's permanent collection.

What struck me most on this rainy Saturday was how intensely crowded the museum was. It took 20 minutes just to check bags and jackets, and then the process of viewing the art became a subtle of battle of wills, wits, and patience. I really felt bad for the guards, who had to somehow try to keep watch over this priceless art, most of it unprotected by any covering or barriers, as the hordes rushed and bumped about. 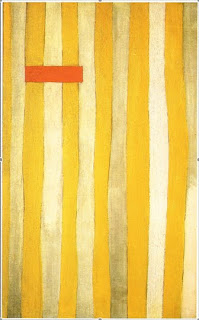 Still, it was possible to find short intervals of peace - even joy - while viewing the incredible wealth of paintings, sculptures, and photographs that are included in the show. Among my best moments on this visit was the discovery of Robert Motherwell's small 1941 gem Little Spanish Prison (shown at right), a painting I don't recall having seen before, possibly because it languished in the museum's storage (though that's just a guess).

Another epiphany came from the mesmerizing effect a certain purple, brown and blue Mark Rothko painting had on me - it literally caused a sort of vertigo, and I found it almost impossible to tear myself away from it. Obviously, the painter had honed his craft to the point that he knew exactly how to use color, texture, and composition to enter the brain via the eye and create this intensely meditative experience. Astonishing.

It was gratifying to see a smaller room filled with wonderful black-and-white photographs as part of this exhibition; most of them, naturally, are by Aaron Siskind, whose supremely silvery prints could make you pretty nostalgic for the old darkroom technology. Also represented here in relative abundance are Harry Callahan and Minor White, while most of the rest of the photos shown are one-offs by the likes of Walter Chappell, Fred Sommer, and - surprisingly - Nathan Lyons. 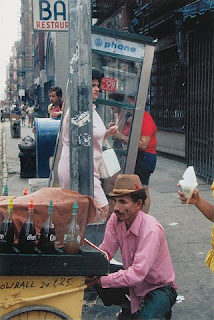 Speaking of photography, another current show at the museum offers a historical survey of the medium seen through the eyes of women. Not being much in the mood for a ponderous lesson, I jumped ahead and then homed in on my favorite of the bunch: Helen Levitt, represented by a glorious set of 14 color prints from the '70s and '80s (one is shown at left).

Levitt's happy eye never fails to delight, and her uninflected observations of life in the streets of the city are unparalleled. Adding to my bemused amusement was the thought that many young viewers of this work may very well be seeing a phone booth in use for the first time in their lives.

Earlier the same day, my constant companion and I were drawn into a brawny and spare display of sculptures by Tom Doyle at Sundaram Tagore Gallery in Chelsea (through April 30). The calligraphically gestural works in rough-hewn wood and colored bronze (one is shown below) resonated in my memory later, in a room at the Modern dominated by Franz Kline paintings and David Smith sculptures.

Doyle's work would have provided perfect company to those two, and there would have been room for one or two of them. Ah, well, wrong generation - but, thank goodness, it seems Abstract Expressionist New York is still alive and kicking. 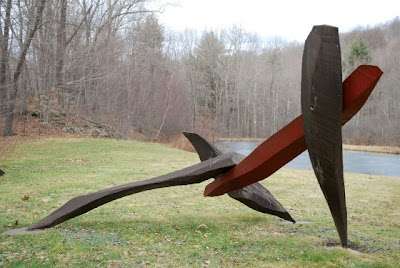 Posted by david brickman at 2:17 PM

I can't help thinking about that Slow Art Day last week, and how you're supposed to just spend more time looking at fewer things. Ideal, but when you make a rare trip to the City, spend 20 minutes in prelims, it's awfully difficult.

Roger,
Your comment couldn't be more apt. After decades of viewing museum shows (and having to accept the concurrent sharp increase in traffic at them), I have tried to hone my approach to select just a few key pieces, and then spend as much time with each as I can. This tactic provides a far more satisfying experience than rushing around to see the whole show while actually absorbing nearly nothing.