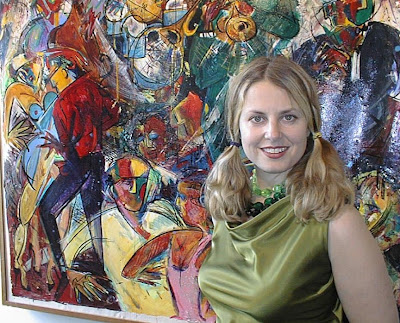 A shining light of the Capital Region art scene was extinguished on Thursday, April 8, when Nadia “Trink” Trinkala died suddenly on Peebles Island in Waterford. She was 44 years old.
Nadia (pronounced Nay-dee-ah) was known to all gallery-goers as a smiling free spirit with fantastic taste in clothes and an extremely generous personal warmth that touched all who came in contact with her. A recent Times Union article described Trinkala as “a painter and jewelry designer, [who] was part of the artistic resurgence of Troy when she opened a gallery, design and furniture business on River Street in 2004.”
But Trink’s story didn’t end or begin there. After a career as a travel agent, and then selling vintage furnishings in Los Angeles, Trink returned to the Capital Region in 1997; in 2002 she opened a gallery in Cohoes that had a big impact on that city and on the lives of some of the artists involved.
Co-directors Tom D’Ambrose and Bob Gullie helped put on a show at Trink Gallery, titled Visions and Vibrations: The Visual Art of Musicians, that included work by already famous creators such as George Frayne (Commander Cody) and Martin Benjamin, as well as kick-starting the visual-art careers of such musical talents as Michael Eck, Chip Fasciana, and Sergio Sericolo, all of whom have gone on to significant local and regional recognition. 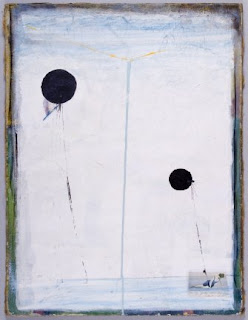 According to D’Ambrose, the gallery’s grand opening drew 1,000 people and caused traffic to back up along Remsen Street. He adds: Nadia had the most beautiful creative spirit of anyone I have ever known ... . She inspired creativity in a countless number of people in upstate New York and New York City, where she had been living for the past few years in DUMBO. Nadia rocked every city she had a gallery in ... Cohoes, Troy, and Hudson. The last time I spoke to her she wanted me to join her in a project that I feel had the potential to bring her beautiful creative spirit to a global stage. She was committed to changing the world through art and music. The world has lost its brightest supernova … .
Later, Trink (the furniture store) moved to Troy, adding a gallery called CJ Gallery at Trink, which showed the work of Wren Panzella, Piper Brown, Christopher Murray and others. D’Ambrose relates a highlight of that experience, when Kid Rock bought two Panzella paintings from the gallery on Labor Day Weekend. (That’s a Panzella painting in the photo of Trink at the top of this post, and one of her own works at right, above.)
A later incarnation of the furniture store and gallery had a brief tenure in Hudson, after which, according to the Times Union obituary, “Nadia … turned her energies toward her natural calling in life - to help others through her compassion and creativity. She began working with the disabled at ARC, Center for Disability Services, Carriage House, Living Resources, and Questar. Her honest spirit, which saw the person as opposed to the disability, led her to reach people in remarkable ways.”
She went on to seek certification in the field of Creative Arts & Music Therapy at The New School in New York and had recently been researching a practical and philosophic framework around the idea of "The Human Citizen." A LinkedIn page listed her occupation as “community enhancement.” She will be greatly missed.
Note: A memorial service for Nadia Trinkala has been scheduled for 2 p.m. on Saturday, April 30, at Cohoes Music Hall. For more information on this and other initiatives in Trink's memory, click here.
Posted by david brickman at 4:59 PM

Thanks David for this. Very sad to hear about her death.
DWx