Sketcher Recalls at ACCR and other Troy shows 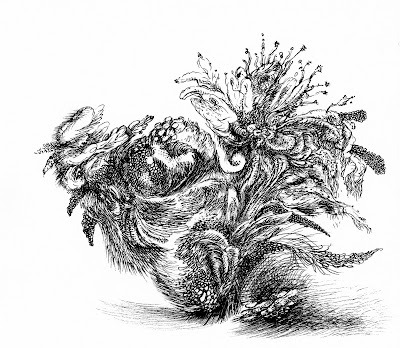 The anagrammatic Union College stage designer Charles Steckler has revealed a hidden identity as an irrepressible doodler in a show at the Arts Center of the Capital Region titled Sketcher Recalls, which opened, along with several other shows of interest, at last Friday's Troy Night Out.

Steckler has been unusually active in the exhibitions arena in recent years, and is now widely known for his inventive and layered dioramas. This show brings out a related body of work that is both more subtle and more personal. Because the drawings are mostly on the scale and level of doodling, anyone could relate to them (after all, who among us doesn't take pen or pencil in hand and make sketches while on the phone or in a meeting?).
However, this is the doodling of a master doodler, and the drawings are enchanting. Most of them have an organic feel, featuring semi-recognizable plant forms or landscapes. Others are less concrete, emphasizing fantasy or pure mark-making. Though no color is employed, there is a notable breadth of media, including metallic inks, Wite-Out, various types of pens and pencils, and occasional embellishments in the form of abrasion, collage, or even added materials such as wire.
Altogether, what Steckler the Sketcher recalls is a lifetime of thoughtful, time-absorbing attention to detail, mood, and form. Four of the 20-plus drawings in this show were included in a recent exhibition at Union's Mandeville Gallery titled Of Weeds and Wildness, which was recently reviewed here. This solo show presents a nice opportunity to revisit those gems and see many more from the same deft hand. It hangs through April 22.
Not far from the Arts Center is the Clement Art Gallery, where a show titled { sub/urban } features the work of painters Ben Schwab and Scott Nelson Foster. Aptly paired, these two look at the built environment in distinct ways, using different techniques that move toward each other in a nicely balanced relationship.
Schwab, who teaches at The College of Saint Rose, works larger, more geometrically, and more colorfully than Foster (his show at Albany Center Gallery was reviewed here in 2009), though his most recent entries in this show represent a departure into smaller, sketchier works in pencil that he calls "postcards." These offer a welcome window into Schwab's process.
Foster is new to the area, having come last fall from Idaho by way of Utah to teach at Siena College. His small-scale, monochromatic watercolors evoke black-and-white photographs, though up close they are just as seductively loose and flowing as watercolors ought to be. The quasi-cool look he takes at subdivisions and big-box stores has an almost spiritual reverence for its subjects.
This is a nice local debut for Foster - I hope we'll see a lot more of his work around here in the years to come. The show remains on view through April 28. 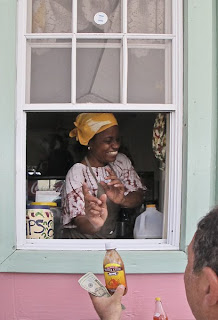 Across the street from the Arts Center is a recently relocated shop called Artcentric, where Albany photographer Connie Frisbee Houde has mounted a solo show amid the clutter. I'm not opposed to alternative spaces, and this seems to be a bustling one, overseen by the keen eye of longtime photographer Debra Lockrow and featuring a range of local artists as well as tons of other crafty stuff.
Houde's show is a departure from her well-known Afghanistan subject matter (reviewed here in 2009), this time representing the more tranquil Caribbean setting of St. John. Though this particular venue doesn't demand a clearly honed style or consistent presentation, Houde's decision to include everything from landscapes to portraits to street scenes to nature details takes away from the overall impact of her vision. That's too bad, because her stuff is great (example shown at right above).
More photography can be seen in a two-person show at the Photography Center of the Capital District by Eric Lindbloom and Joseph Schuyler titled Truro Light. As expected, the pictures are from Cape Cod, but most of them are not your everyday beach scenes, and some are purely transcendent.
Lindbloom, who hails from Poughkeepsie and also shows in New York City, works in medium-format black and white - yes, he still shoots film and makes prints in a darkroom - and his very sensitively seen images are gorgeous. Some of the work is presented in series, such as one group of wonderfully wave-tossed sea grass, and another of selectively focused woodsy details with more than a little hint of magic.
Schuyler offers digitally-based color prints here - most are elegantly composed, some quite dramatic, while others have an Oriental lyricism. The digital color is distractingly blocked up in some of Schuyler's prints, but in others they remain quite subtle. His take on the Cape is more about the place than Lindbloom's (whose images could be from almost any climatically similar place); Schuyler's best work puts you right there in the elements, where you feel the wind, sand, and salt. The show continues through March 25.
Posted by david brickman at 10:34 AM