Up-and-coming painters Ben Schwab and Blake Shirley have been paired for a show at Albany Center Gallery, making for a good opportunity to see recent bodies of work by artists somewhat new to the area. But it's also a strange match - sort of like The Odd Couple's Felix Ungar and Oscar Madison, with Schwab as the neat-freak and Shirley as the slob.

Despite their differences of approach, subject, and scale, the two artists' works are comfortably intermingled in the gallery's four rooms, which include 10 or so pieces by each that date from 2007 and later. Schwab, who came from Philadelphia to Albany to teach at The College of Saint Rose, paints and draws architecture. Shirley, who earned his MFA in 2007 and teaches at the University of Connecticut, paints on paper or canvas in a hybrid of styles; his subject matter, though not always recognizable, tends toward the domestic.
Schwab's paintings, with one exception in this selection, are small and tight (the one pictured at the top of this post, titled Troy, is large for him at 12 by 27 inches). They depict somewhat simplified jumbles of urban buildings with a rich but not expressive color range and, in most cases, with perspective lines extended into the space around the structures. He often uses a high point of view, which emphasizes the slight otherworldliness the floating lines create and underscores the sense that humans (absent in these images) are not really part of the process.
Some of Schwab's work harks back to the early 20th-century paintings of Modernists like Charles Sheeler, and has a distinctly Midwestern sensibility. This inkling is born out by a scan of his bio, which includes study in Missouri and Indiana. But Schwab is no yokel - he has also studied in Florence, and traveled in Spain, Germany, Switzerland, England, the Netherlands, and France; last year, he went to Tokyo on a Saint Rose faculty research grant. His painting in the show titled Nihonbashi Tokyo is among his best.
Schwab's drawings, whether sketchy in graphite on gesso, or lush in charcoal on paper, add another dimension to the show. While they further reveal the artist's skill and process, the charcoals in particular also display a warmth that is sometimes lacking in the paintings. 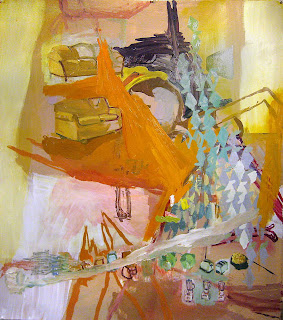 Shirley works very loosely compared to Schwab, far more colorfully, and much larger. His work in the show ranges from about 40 by 50 inches to about 8 feet square, and it seems to get better as it gets bigger, perhaps because the larger canvases give his brush more room to move.
At first, I was put off by Shirley's mundane content - stuff like laundry, junky furniture, and an incongruous old-fashioned rolling blackboard are strewn through his images almost haphazardly, often in such a topsy-turvy way as to make you wonder if the paintings are hung upside-down. But, the more I looked, the better I liked these paintings.
Sometimes you have to give an artist a chance to bring you into his world before you pass judgment. Do I care about cheap couches and busted file cabinets? Not a whit. But I came to enjoy the way Shirley paints them, without being concerned for what it all might mean.
In these works, bright clouds of color obscure a rendered catalog of objects, breaking up spatial relationships and shifting scale (the example shown above is a 2009 oil and acrylic on paper titled Caught). A lot of it is pretty messy and unstructured, with some paintings even appearing unfinished - but, at the same time, Shirley's work is pure eye candy in its more abstract sweeps of gestural color.
In a world where too many shows are curator-driven and thematic, it's good to see singular bodies of work by artists who are focused on the task of creating them, and to have a chance to understand them in their own context. The gallery is doing an important service by offering this type of opportunity to regional artists and their followers.

By the way, the Schwab/Shirley show opened on July 14 but will have its reception on Friday (Aug. 7) from 5 to 9 p.m., as part of the regular 1st Friday festivities.

NOTE: In the interest of full transparency, please be aware that I am a member of Albany Center Gallery's exhibits committee, which reviews and rates submissions by artists.
Posted by david brickman at 10:24 AM