While the Albany Institute of History & Art hosts its landmark exhibition Hudson River Panorama: 400 Years of History, Art, and Culture, which is slated to run through Jan. 3 (and rumored to be extended into June), there are two shorter-term sidebar exhibitions that add further inducement to visit the museum now.
Hudson River Panorama itself is a sweeping collection that, if it were just an art show, would be a large and impressive one - but it is still more of a history show overall, and therefore not something for me to review here. However, Different at Every Turn: Contemporary Painters of the Hudson River, a travelling exhibition of one work each by 17 painters, and the solo exhibition Life Along the Hudson: Photographs by Joseph Squillante are another story.
Different at Every Turn, which opened in June and has just been extended a week through Aug. 30, is the first exhibition to be installed in the Institute's Rice House, and it affords a nice opportunity to get in and nose around those rooms when they aren't filled with folks at a reception. I was amused to find that simply reaching the exhibition space required enough twists and turns to get anyone in the right frame of mind for a show of this title.
The show originated at Kingsborough Community College of the City University of New York, and will travel next to SUNY Potsdam and then to the U.S. Military Academy at West Point. It was organized by Virginia Creighton, who commits a curatorial faux pas by including herself in the group of 17, but there's nothing much wrong with her choices overall, which display a great range of painting styles and approaches. 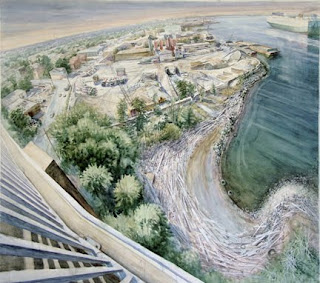 Variety is the show's key benefit, in that it gives visitors an overview of the many possibilities that artists face, and allows us to enjoy the diversity of these 17 solutions. Among the highlights are a small work by Peter McCaffrey that captures Bannerman's Castle through the mist; a sober aerial view of Manhattan at dawn by the show's best-known painter, Yvonne Jacquette; a fetching Catskills panorama titled All Creation, by the AIHA's own Tom Nelson(shown at top of this post); Diane Kurz's lushly colorful The Hudson River from the Bear Mountain Bridge; and a dizzying watercolor by Bill Murphy (shown above at right). 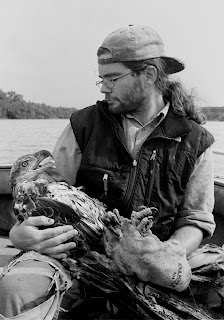 Photographer Joseph Squillante's show fills two rooms on the museum's third floor, which emphasizes its split personality. The first, smaller room holds a group of portraits, including fishermen, a farmer, and Pete Seeger (the one at left is titled Wildlife biologist Craig Thompson with immature bald eagle). These pictures could be described as journalistic - clearly, Squillante sees himself as a storyteller.
But the second room lays out a far more aesthetic scheme, in which the Hudson as landscape is explored from the lower tip of Manhattan to the top of Mount Marcy. This, for me, was the more successful part of the exhibition, not that Squillante is a better artist than journalist (he's darn good at both), but that the story told by the landscapes is both more coherent and more compelling in its simplicity.
Also, unlike the portraits, which are strongly and necessarily rooted in who they depict, some of the landscapes transcend their subject matter to take us to a new place (the example shown below is titled Peekskill Bay). It is the Hudson River, yes, but it is also anywhere in the world, as well as somewhere in the mind or spirit. This is where I prefer art to take me. You can go see where it takes you, through Oct. 4.

Posted by david brickman at 1:43 PM

It is amazing - this last image seemed to shimmer like it was animated!