Prendergast in Italy (and more) at WCMA 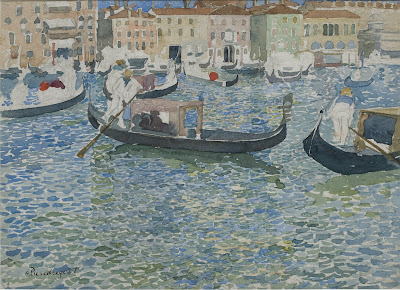 Maurice Prendergast, Grand Canal, Venice, ca. 1898–99 watercolor and pencil on paper 10 x 13 7/8 inches
Williams College Museum of Art, Gift of Mrs. Charles Prendergast
With all the attention being paid to the Dove/O’Keeffe show at the Clark Art Institute, it could be easy to overlook Williamstown’s other world-class museum, the Williams College Museum of Art. But that would be a grave mistake, especially now, as the WCMA is hosting four exhibitions that are all worth some serious viewing time.

First up is the gorgeous Prendergast in Italy, created in partnership with the Terra Foundation of American Art in Chicago, which draws on the vast Prendergast collection of the WCMA, along with the Terra’s major holdings and several private collections. After it completes its run here on Sept. 20, the show will travel to the Peggy Guggenheim Collection in Venice, Italy, and then in 2010 to the Museum of Fine Arts, Houston.

Prendergast in Italy presents the work of an artist at the top of his game at two distinct points in his career, during travels in Italy in 1898-9 and 1911-12. A consummate craftsman, Maurice Prendergast began as a commercial artist, but then crossed over into fine art after studying in Paris in the 1890s. With his first sojourn to Italy, focusing on Venice as his subject, his success was launched. Always attuned to the development of Modern art, over the next decade Prendergast changed styles; the work of his second sojourn is so different from the first that it is almost like viewing two artists, though the dominant medium throughout is watercolor (to compare, see the images at the top and bottom of this post). 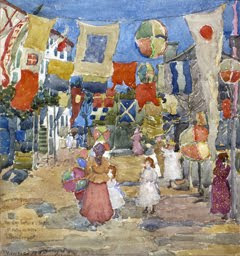 Not to worry: Both are extraordinarily good. The early Prendergast takes an illustrative style and applies it to vividly perceived scenes of Victorian life along the canals. The images are virtually bursting with color, light, and atmosphere (the one reproduced at right is titled Fiesta–Venice–S. Pietro in Volta). Both accurate and expressive, even more than 100 years later they communicate the artist's exuberance at being alive in a place full of stimulation and possibility.
The later work, in keeping with the principles of Modern art, is slightly cooler and more intellectual, even as it is also more primitive. If this seems self-contradictory, consider that Prendergast's main inspiration in adopting the new style came from Paul Cézanne and Henri Matisse. These paintings delight the eye, but don't take you into the action so much as they place you near enough to observe it as a collection of shapes, lines, and tones.
If I could criticize the show, it is that it is perhaps too comprehensive. The two large galleries simply overflow with Prendergast's abundant output. If one is not a fan, it could become tiresome – but for lovers of this artist and period, it is a carnival of marvelous proportions. 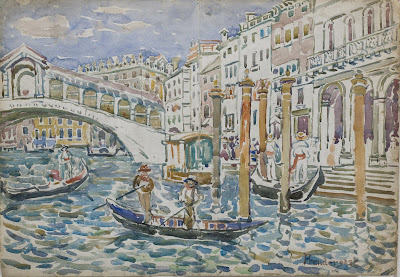 Maurice Prendergast, Rialto, Venice, ca. 1911–12 watercolor and pencil on paper
Williams College Museum of Art, Gift of Mrs. Charles Prendergast
Also getting the star treatment at the WCMA is another almost absurdly talented and productive artist, the 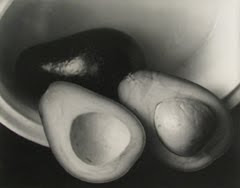 photographer (and painter) Edward Steichen. Filling a very large gallery almost salon-style is In High Fashion, the Condé Nast Years, 1923-1937. It simply astonishes and overwhelms with the sheer number of masterful portraits of the stars of the day and the groundbreaking fashion pictures that today we take for 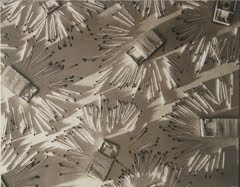 granted but, when Steichen did them, were a revelation. Again, fans will love it, but others may grow bored. This show ends on Sept. 13.

In a second, smaller gallery, another Steichen show focuses on his personal work. Titled Episodes from a Life in Photography, it features 90 pictures that range from early abstractions (the example above of avocados was made in 1920) to an extended series of landscapes made at Walden Pond, and also includes some commercial images, such as the jazzy 1926 Design for Stehli Silks shown above at right. this show will remain on view through Nov. 8. 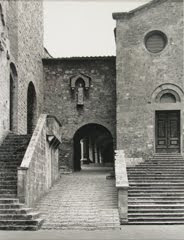 Finally, another show of photographs features the work of a Williams alumnus named Ralph Lieberman. While Steichen is a pretty tough act to follow, Lieberman's architecturally inspired black-and-white work holds up very well. Many of the images are classical renderings of their subject matter (such as the one shown here, from San Gimignano in Italy) while others display a more analytical and expressive mind at work. He does Williams proud.
Posted by david brickman at 6:00 AM