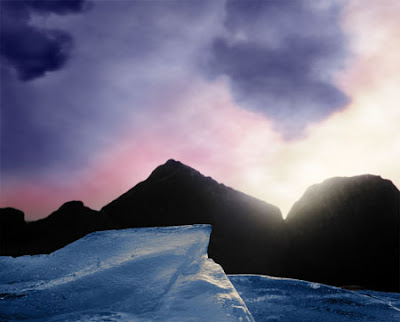 An extraordinary show of photographs by Christopher Jordan is currently on view at RPI's Chapel + Cultural Center, which is slightly off the beaten track but actually very easy to find and, being a Catholic church as well as a beautiful gallery, it's open pretty much all the time.
Jordan, who came to the area about five years ago to teach at Sage College of Albany, has already moved on to his next teaching job in Tuscaloosa, Ala.; fortunately for us, the show will remain through Sept. 28. Titled Ablation Points, the collection of about 20 pieces in both color and black and white has integrated Jordan's love of landscape photography with his knack for digital tinkering, resulting in an innovative and transformative body of work that confounds our preconceptions about both (you can click here to see examples on his website).
How's that? First, he freezes up a bunch of ice in his home freezer and sets up a studio arrangement that includes a rubber-lined tray of water, cottony cloud fuzz, rocks, lights, and whatever else he may need to concoct an illusory Icelandic fjordscape (and, yes, he has actually been to Iceland). Then he shoots 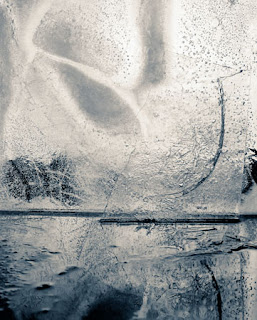 large-format black-and-white negatives with a view camera to capture these fictions in very great detail. Some of the images in the show are beautifully crafted straight silver prints from those negs (example at right), and they are quite lovely near-abstractions; but the rest are something significantly different.
Jordan got his master's degree in photography at RIT, a program known for its adherence to extreme technical excellence - hence the view camera and all that. But he has added the digital arena to his set of skills, and it is in these Ablation pictures that the old and new technologies come together to create something excitingly new.
After shooting a variety of setups, Jordan scans the negatives into a very high definition digital environment and transforms them, mainly by adding color. The amazingly realistic and expressive effects he achieves, without resorting to cheap tricks, is what makes this work so impressive.
Even when the elements of Jordan's images are reduced to a few shapes and gestures, the way they capture atmosphere is uncanny. In this, he rivals his rightful predecessors, the Hudson River School painters. They, too, were using beauty to convey messages that are essentially spiritual and environmental.
Jordan describes these works as "an extended metaphor for climate change," and you do feel the sadness that pervades their sense of awe. The word "ablation," which is a synonym for erosion or vaporization (you can trust me, I looked it up) makes his message clear. While it's doubtful that pictures can help much to protect the future of the glaciers, I feel strongly that Jordan has produced something of lasting value by making them. 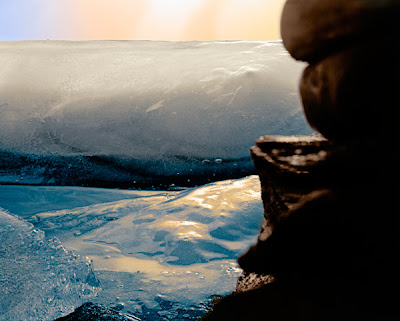 Posted by david brickman at 6:10 AM