Out of This World at Albany Airport Gallery 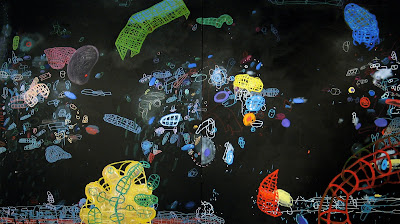 With a name like Out of This World: Transcending the Terrestrial in Contemporary Art, the current show at the Albany International Airport Gallery would seem to be about taking people to new places without even getting them onto an airplane, and in that it succeeds handily.

Featuring seven artists, about half of whom have Airport Gallery history, the show is such a riot of color that one could easily overlook its organizing theme of transformation. Starting with the neon yellow that covers the gallery walls, this is an almost psychedelic experience, optically stimulating and very entertaining – ideal to perk up the weary traveler or distract those waiting to pick up same – but not to be taken all that seriously.

Devorah Sperber, for example, offers three pieces that depict Leonard Nimoy as Star Trek’s Mr. Spock, one made with 1,102 cleverly aligned spools of thread, the other two with chenille stems (for the uninitiated, those are pipe cleaners) that have been placed with digital accuracy to build an image out of color-coordinated dots.

Also working with blobs and dots, but more abstractly, is Betsy Brandt, whose agglomerations of artificial flower parts, hot glue, plastic beads, and other craft store paraphernalia tickle the 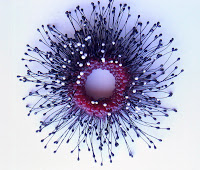 imagination as they conjure microscopic or undersea worlds and the creatures that inhabit them (a detail of one, titled Akin, is shown at right). Her sister, Susie Brandt, works in fabric. Visitors to the exhibition who take the stairs are welcomed by a Susie Brandt installation that evokes geology with folded and stacked strips of colorful fabric that cling to a narrow ledge and work their way up the wall all the way to the ceiling, like a sedimentary intrusion.

Susie Brandt’s other works in the show consist of fanciful (and, again, brightly hued) hooked rugs that are based on tracings of round city water drains and amoeba-like tree trunks – the latter are displayed on a rectangle of Astroturf, which makes a nice, bright green contrast but is a bit campy. Speaking of green, it’s the dominant color of one of Chris Harvey’s marvelous stacks of objects, this one featuring the heads of many plastic toys (including Shrek, of course), and amusingly titled Totem for the New Green Inititiative.

Harvey made quite a splash last year with a large installation at the Arts Center of the Capital Region in Troy titled The Mandala of Perfect Happiness. A video on view here presents the creation of that piece, very speeded up, with Harvey clowning throughout. His other new works in this show include a row of columns (shown at the bottom of this post) in the rainbow colors of our plastic Wal-Mart culture. Its title, Seven Pillars of Commerce and Pleasure, pretty much sums up the piece’s intentions and results – viewing it is indeed very pleasurable.

The show’s painter is David Miller, recently retired from Skidmore College and, amazingly, showing here for the first time. Two very large pieces of his from 2007 are included: one a highly textural and aptly titled Symphony in Yellow, the other smoother, darker, and more evocative of the show’s theme with its inky black depths and floating figures (it is titled Midnight in the Garden of the Sea and is shown at the top of this post). These are strong paintings, but I was more moved by Miller’s series of seven much smaller panels made this year that have delicate markings and luscious color variations, and resemble views of Earth from a satellite.

Also included in the show are three ravishing sculptures by Ginger Ertz (plus one, a chandelier, that has been hanging above the stairwell for a year or more), all made from those suddenly ubiquitous chenille stems. Ertz emphasizes sculptural form and texture, rather than color, in these sexy and humorous pieces, such as one titled Docking that may depict two odd creatures about to mate, and another titled Odalisque. Ertz, of Schenectady, just received a coveted NYFA fellowship for this work, and it’s easy to see why.

Finally, the show includes another sculptor who uses familiar material in an innovative way – and, unless you live under a rock, you’ve probably seen Jennifer Maestre’s amazing pencil-stub critters on the Internet. Here’s your chance to see them in 3-D and marvel at the technical and formal achievement they represent.

Overall, this is the sort of show we’ve grown accustomed to seeing at the Airport Gallery – hip, innovative, high-quality, and entertaining. It is also refreshing to see so much sculpture in a curated exhibition, which is no doubt due to the fact that Gallery Director Sharon Bates is herself a sculptor – but it is no less appreciated for that. The show runs through Nov. 29, and the gallery’s hours are an unbeatable 7 a.m. to 11 p.m. daily. Whether you’re flying or not, it’s well worth the trip. 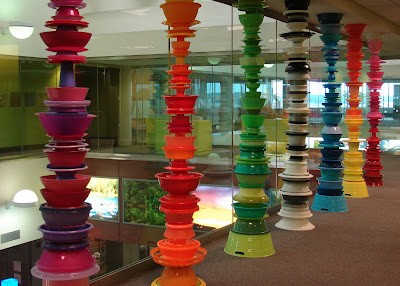 Posted by david brickman at 4:06 PM

I caught this show while waiting for a plane to arrive a couple of weekends ago, and agree that it is worth the trip . . . I love it when technical mastery and fun go hand in hand together as well as they do in this show.

Thanks so much for highlighting this show. I made a special detour to see it and it was inspiring and energizing!