It’s only the river … 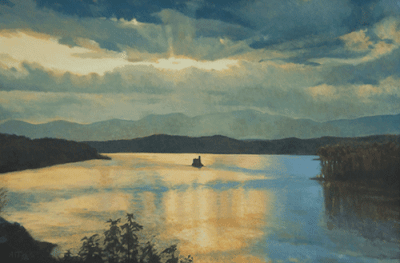 The Hudson River has been a wellspring of artistic inspiration for centuries, and for one very good reason: the light. Anthony Thompson paints that light, and the river, with exceeding skill and concentration, as evidenced by his semi-retrospective solo show, which runs through Sept. 8 at Martinez Gallery in Troy. Though the gallery has limited hours (see below), tonight's Troy Night Out affords a long evening's opportunity to go have a look.
Thompson has been at it for quite some time. Based in Hudson, his professional credentials stretch back to 1964, when he began a teaching career that included long stints at Parsons School of Design in New York City and as head of the fine arts department at Columbia-Greene Community College. This exhibition features 14 paintings from 1999 to 2008; the earliest, titled Hudson Light VII, lives up to its name, as it is bathed in the golden glow of a classic mixed-cloud sky that filters the setting sun over a tiny, lonely Bannerman's Castle (see image at top of post).
Thompson revisits this scene in an equally stunning 2007 painting titled Middle Island that captures a cooler palette, perhaps at dawn (see image near bottom of post). While these and other traditional images make up the bulk of the show, there is a challenging edge lurking at its periphery. Thompson is not primarily a colorist, and he works dark forms into his sometimes extremely assymetrical compositions, using silhouetting to emphasize the light as it glints from sky to water.
A strong example of this process is presented twice in the show - as a "study" (placed in quotes,

because it is a fully realized painting) and larger final version of Olana Sunburst (shown at right). This is a rather disquieting image, as tempestuous as a Turner, which seems representative of the dual nature of human spirituality.
Two other pieces in the show confront duality as a more optical game, copying and flipping similar images to create a Rorschach effect. One of these cognitive experiments (in addition to an MFA from Cornell, the artist boasts an MA in cognitive psychology from the New School) incorporates two snapshot-sized color photos of a painting, then adds pooled acrylic blobs on top of them; the other is a highly detailed painting of a pond, 5 by 6½ feet. Though they are oddities among the rest of the work here, they do open a window on Thompson's processes, both visual and mental. Martinez Gallery's hours are Thursday-Sunday, 2:00 to 4:30 p.m., and by appointment. It would be nice if they were more expansive, but the fact that this commercial gallery has survived in the Capital Region since 2001, which is something of a record, shows they are doing many things right. Go see for yourself what it's about. 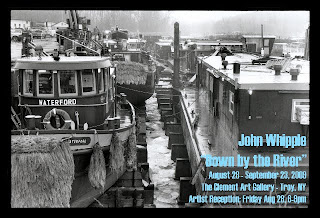 And, while you're at it, check out another Hudson River show that opens tonight (Friday, Aug. 28) and runs through Sept. 23 at Clement Art Gallery, which is just a few steps from Martinez. The show, titled Down by the River, presents a large body of black-and-white photographs by John Whipple that are part of a long-term project looking at many aspects of the river and its inhabitants. I recommend it.
Posted by david brickman at 12:33 PM