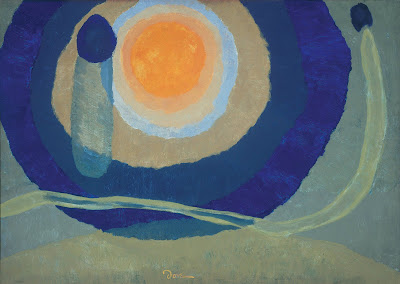 He inspired Georgia O'Keeffe to begin painting abstractly, became a lifelong friend and ongoing influence on her work, and was celebrated alongside her by the most influential art critics of the first half of the 20th century. Still, though millions of people today can instantly recognize almost any picture by (or of) O'Keeffe, the name Arthur Dove scarcely rings a bell.

But not if Debra Bricker Balken has her way. Balken is the independent curator who created this summer's blockbuster exhibition, Dove/O'Keeffe: Circles of Influence, on view at the Sterling and Francine Clark Art Institute in Williamstown, Mass., through Sept. 7. Balken also put together a Dove retrospective in 1997, and has written the text for the handsome catalog that accompanies this show. 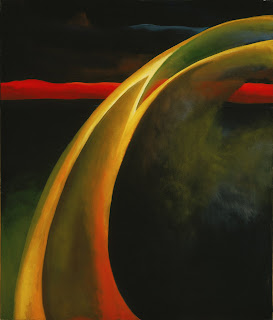 The exhibition at the Clark amply demonstrates both how and why Dove was an artist of similar significance to O'Keeffe, and lovingly documents the depth and duration of their connection. It also features two other players: Alfred Stieglitz, who showed both artists' work at his New York City gallery and introduced them to each other before eventually marrying O'Keeffe; and Sigmund Freud, whose writing on sex greatly influenced the thinking of participants in the American Modernist movement.

O'Keeffe bristled at the characterization of herself and Dove as representative of their respective gender in painting, and I think she was right - the many works by both artists in this show share and swap so many characteristics as to defy any honest viewer who would try to categorize either artist's expression as essentially male or female (to test yourself, take a look at the paintings reproduced above at right and below at left, and then decide which painting is better representative of which sex - they are identified at the bottom of this post).

That debate, I would add, is part of the point. Abstraction, in the hands of Dove and O'Keeffe, became a disembodied celebration of nature, expressed not through the neuroses and complexities of human perceptions, but experienced instead as a pure thing in its forms and essences. What is remarkable about these pioneering paintings is how fresh they seem, and relevant they remain, nearly a century after they were made. 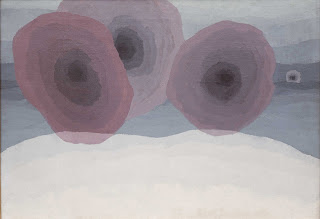 The exhibition does well by presenting the work in bite-size pairs and groupings, and by organizing it into several historical themes (such as New York Modernism) and contextual categories (such as Color/Light). The wall texts are informative, which really helps one to navigate the show conceptually, and succinct, which is practical, as it is likely to be pretty crowded any time you visit. The throngs make it a bit difficult to linger, but it is essential that you take the time to contemplate this art long enough to let it work its magic with your perceptions.

And magical it is. From Dove's stark early drawings, through O'Keefe's groundbreaking watercolors and Dove's experiments with materials such as glass and metal, to the final pairings of the two artists' transcendental nature paintings, it is both a lesson in the history of Modern art and an immersion in the process and power of fully resolved works. While the key to the show is how it works as a whole, both in relating Dove's work to O'Keeffe's and in presenting each artist's work on its own, there are several highlights worth mentioning.

While the larger, finished paintings are very impressive, both artists' watercolor sketches are fascinating, and they provide convenient bookends to the exhibition - O'Keeffe's journey began with hers as she discovered a new style in 1916-17, and Dove's ended with his, as he made one or two tiny personal images each day in the years leading up to his death in 1946.

A room that places two major O'Keeffe cityscapes side by side, and then adds a quieter but compositionally identical Dove nearby, holds enough interest to justify the entire exhibition. Equally, two brilliant Doves (one of which is reproduced at the top of this post) dominate another room, while an understated O'Keeffe pastel titled Slightly Open Clam Shell hangs serenely nearby. Amusingly, the other Dove is titled Alfie's Delight; I will go out on a limb and assert that it's a reference to Stieglitz (who knew they called him Alfie?).

A trio of works by Dove that develop an idea for an image of a stream from a sketch into a fine painting is engrossing and gratifying. On an adjacent wall, two luminous O'Keeffes explore a glowing humanlike form in relation to a vividly green landscape. In this corner of the museum, the presence of the artists is as strong as if we were in their studios the day after these works came into existence.

The entrance to the exhibition, which features a Dove painting of the moon that looks like a towering plant and an O'Keeffe painting of a jack-in-the-pulpit that resembles the Northern lights, sets the proper tone. These are awe-inspiring artists; juxtaposing the two enhances the already powerful experience of seeing their work individually. This fabulous show will not travel - you must see it here and now, and I recommend that you do. 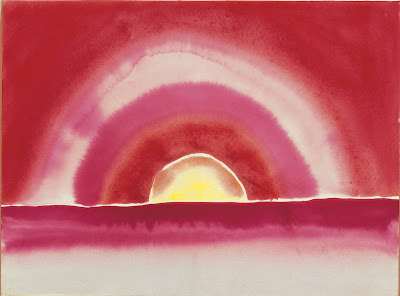