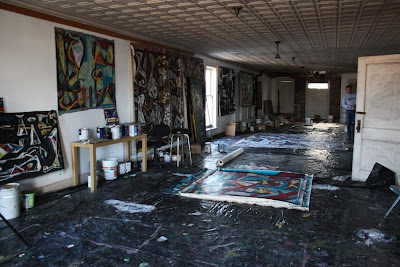 View of about half of Sam Altekruse’s studio. The paintings on the wall are finished; the ones on the floor are still in progress. He also uses a table to work on much smaller pieces.

In a very raw space high above the gritty downtown of a Capital Region city, Sam Altekruse paints. The 43-year-old left-hander has lived all over the United States – New Orleans, Los Angeles, New York, South Carolina – and has traveled extensively abroad, including long visits to Mexico, Berlin, and Pakistan. In all these places, he has painted.

Altekruse recently gave me a guided tour of this history in his sprawling, 3,200-square-foot workspace. The visit lasted about two hours and included viewings of a great many paintings and drawings that range in size from a few inches across to about 10 feet square. They are made in oils, watercolor, gouache, pen and ink, acrylics, and house paint. Very few of the works have ever been shown.
There was a time when Altekruse had a gallery, in Atlanta, that sold a steady stream of his works on paper, but they were pleasant landscapes and that was a long time ago. Now, he paints mostly abstractly, channeling the intense energy and imagery of Pablo Picasso filtered through Jackson Pollock and then flavored with Altekruse’s own personal style.
Not that he wants you to think of it that way. Altekruse resists the comparison to the two artists his work mosts resembles, both because he is not trying to imitate them and because he has the natural pride of a serious painter who needs to be recognized for who he is. As he puts it, “Pollocasso … is the cage everyone wants to break,” an interesting perspective on the art that dominated the 20th century so thoroughly that whatever came after it has been affected by it. 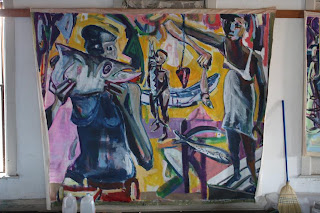 So, what does Altekruse do? In addition to having the skill (and formal art-school training) to accurately sketch whatever he comes across, or to expressively riff on that, whether it is figurative, architectural or landscape, he can also create fictions or dramas (as the past and present German Expressionists did and do); and, most important, he can boil all of that down to essential marks and forms that become a unique language, often on a rather large scale.
This last approach is the work that I think most distinguishes Altekruse, as it is bold, muscular, almost primal – but it is also this work that gets him into the “two Ps” quandary. Not that I would mind if I were him. Picasso famously described himself and all artists as thieves, and Pollock quite clearly followed Picasso early in his career – so, all we’re saying when we compare Altekruse to them is that he is working within a tradition. And part of that tradition is to both steal like crazy and to believe fiercely in yourself as an original.
Altekruse upholds the legacy of these and other great painters by working feverishly (fueled by cup after cup of hot tea); relentlessly reworking and rethinking what he has done (many of his paintings have been built up over years or even decades); and keeping fresh with direct observation and a lot of drawing. 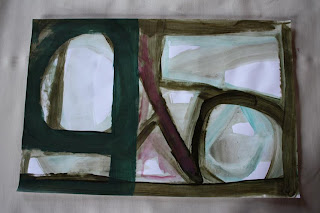 Among the best things he showed me were an almost endless stack of works on paper, about 2 by 3 feet (small for him), that meld the almost calligraphic gestures of some of his brushwork with the heavy layering of the larger works on canvas; equally, they incorporate a range of quasi-abstract imagery and recognizable symbols that seem to be the key to where he’s going as a painter. Where his large paintings get really impressive is when these studies inform them – though I hesitate to call them studies, as they can be quite finished, too.
Another exciting part of the process, both with the larger works on canvas and the smaller paper pieces, involves combining compositions together. This can happen in an almost automatic way or more by design. Regardless, the results for me were strongly intriguing and, I think, for Altekruse quite gratifying.
All this work is not without a goal – Altekruse says he would like to be showing in New York City, where he knows people and where some of his old art school buddies have found success. It’s never been easy to pull that off, and now is not the most propitious time for such efforts, as the New York art scene is suffering harsh economic realities and the market is in a severe downward spiral.
But that may make for opportunity where before there was none. I wish him well in making this dream come true, and I honestly believe he both deserves it and has what it takes to get there. 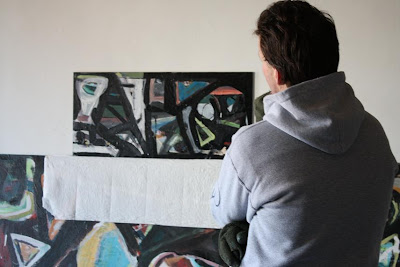 Altekruse ponders the final composition of one of his paintings.
Posted by david brickman at 11:00 AM