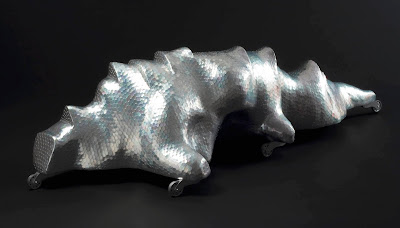 Beginning with the title, there is a lot that's intriguing about John J.G. Roth's installation of sculptures on view at the Saratoga Arts Center Gallery through March 26. Even before seeing the show, Figment Transport begins working a sort of magic on our imagination - it's exactly the evocative combination of words that promises an equally evocative artistic experience.

As it turns out, the show is both very, very good and ever so slightly disappointing. In it, Roth offers two virtually separate but equal bodies of work - dioramas that present spooky little vignettes, most of them encased inside elaborate hardwood cabinetry; and whimsically creepy quasi-critters on wheels.

Roth's skill with a variety of plastic media is supreme, and his ideas are original - both hallmarks of a first-rate artist - but the disparity between the two groups of work is somewhat disorienting. Also, they insufficiently fill the spacious gallery, making for a sparseness that cools down the effect of what could otherwise have been a very engaging viewing experience. 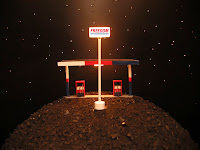 Of the 12 works on view, six feature sinuous forms covered in metallic discs that give them the appearance of being scaled like a lizard or a fish (the one pictured at the top of this post is titled Cretaceous Mode). Indeed, two of them are shown as if in water; these two pieces also bridge the gap between the rolling works and those inside cabinets. The others, which crouch upon their wheels (one instead hangs suspended from a wire), are about equal parts boy's fantasy car and evolutionary anomaly.

Roth satisfies the almost irresistible urge to stroke these untouchable sculptures by providing a sample of the metal scales you can touch. But I found the sleek machine forms almost as repellent as they are attractive - which, I suspect, is the key to their underlying charm and to unlocking the artist's intent.

Though these "conveyances" are the more recent, I prefer Roth's other work, both for its preposterous wit and for its colorful darkness. The detail shown above at right, from a work titled Gleamin' Freedom, exposes the satire inherent in these works, but it can't communicate what it's like to see them in the gallery, where scale and obscurity play major roles. To see what's shown in the photo, you have to bend and peer through Gleamin' Freedom's peephole, which reinforces both the irony and the near-impossibility of its glowing message.

My favorite piece in the show (pictured below) is equally impossible. Titled Divine Imperial Commuter, it depicts a retro-futuristic train engine simultaneously going both ways on a track to nowhere. Its display case conjures 19th-century cabinets of curiosities, while its ambition mirrors that industrial age's excesses. Is it still relevant today? You better believe it is.

Posted by david brickman at 2:39 PM