The New York City comedian - er, art critic - Jerry Saltz entertained and enlightened a full house at The College of Saint Rose's St. Joseph's Auditorium on Tuesday, making for a must-see event on the local scene. 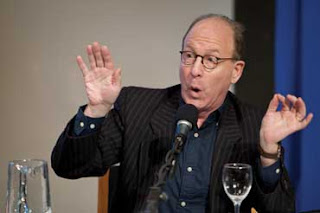 Saltz began by taking the blame for a scheduling snafu that had the lecture (the college's first in a new series sponsored by class of '46 alumna Cathryn Buckley Arcomano) moved at late notice from Wednesday to Tuesday. "Don't forgive me," he implored the crowd, "but don't forget me."

He then went on to spend a full hour, microphone in hand, pacing the stage like a medicine show veteran, extolling the virtues of everything from pottery to long hair to Glenn Beck, dropping names and bon mots, and generally being brilliant, controversial, and - dare I say it? - sincere.

Saltz alternately glorified and berated himself, showing a fair degree of honesty in the process, but he also engaged the audience in a direct, personal way that clearly showed why he is a much sought-after speaker. Much of what he had to say was intended for the many student-artists in the room, whom he frequently and cloyingly addressed as "My loves!" and to whom he offered plenty of concrete, if perhaps somewhat difficult-to-apply advice.

One of my favorite moments came early, when Saltz asked "how many of you are artists?" Upon seeing scores of hands shoot up, he exclaimed, "God have mercy on you!"

He spoke off the cuff, occasionally consulting notes when he got off track ("Where am I going? Don't worry, I'm comin' back."), but he didn't get far off track because this was essentially a well practiced performance with clear objectives pulled out of a repertoire of ideas from which he could pick and choose as time and energy allowed.

The art world, philosophy, and politics were recurring themes that Saltz tended to weave together. "Art can change the world," he declared, "incrementally and by osmosis." About the dialogue between artists and critics, he asserted that "when someone doesn't like you or your work, it doesn't mean you or your work are bad," and then went on to exhort the members of the audience, male and female alike, to "grow a pair."

Saltz is one of those folks who has become famous on Facebook, and he waxed poetic about the value of mass communication, stating emphatically his belief that "it's possible for the many to speak to one another coherently," and citing the uprisings in the Middle East as evidence of this. Connecting to that thought, he repeatedly advised people to consider "taking matters back into your own hands."

By this I think he meant to harness the power of art, which he characterized as "part of a cosmic force ... a self-replicating force ... no more and no less important than religion, science, and philosophy ... ." "Art," he added, "is the ability to imbed thought in material."

Further wisdom from Saltz: "Pleasure is one of the most important forms of knowledge."
And: "You need to be delusional."

A lively Q&A session ended the evening, which the rest of the audience and I seemed to take pleasure in - but perhaps we were just deluding ourselves.
Posted by david brickman at 12:42 PM