Kiki Smith and Whiting Tennis at the Tang 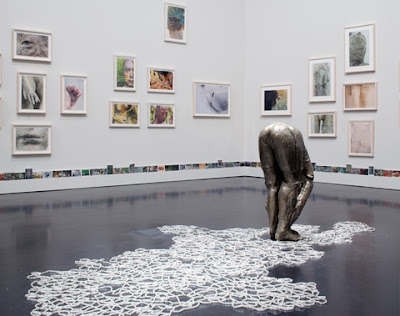 Two artists of both shared and contrasting sensibilities are presented in solo shows at Skidmore College's Tang Teaching Museum through the end of the year. Kiki Smith is by far the more famous and influential of the two; her show did not originate at the Tang, having been brought in from the Henry Art Gallery at the University of Washington in Seattle. Whiting Tennis, who hails from Seattle himself, is the subject of a Tang "Opener," whereby the museum's curators make a point of introducing an artist not previously broadly exposed in this area. So we have the known and the unknown side by side; the Seattle connection may be intended or not.

I Myself Have Seen It: Photography and Kiki Smith includes a very great number of photographs, but it also features sculptures, drawings, prints and mixed media, all of which are what the artist is widely known for producing. She is considered a feminist, in that her work runs counter to male-dominated viewpoints regarding the female body in art, and she is clearly very much of her time - a child of the '60s and '70s, wild and undisciplined in many ways.

The installation of I Myself Have Seen It is highly structured, however (see view at the top of this post), prominently featuring a narrow ledge at the bottom edge of the gallery's walls that supports an array of countless 4x6-inch color prints in minimal plastic box-frames, running like a subtitled narrative below the entire text of the exhibition. On the walls are many larger, properly framed photographs, as well as the other works, in great big groups and sequences. 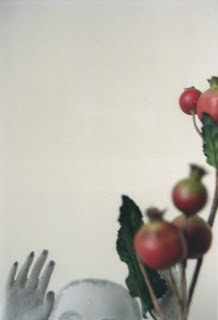 Smith's imagery is process-oriented, often derived from ongoing sculptural installations, and it is gritty, grim, even gruesome by turns. Bodies are depicted nude, distorted and dismembered; faces are expressionless. This is not easy work to confront and, despite a lyrical patina to some of the colorful photographs that belies Smith's overall deathliness, difficult to enjoy.

In contrast, Tennis, who has his own flirtation with deathly imagery in the form of gallows- or coffin-like forms, is like a breath of fresh air. Where Smith is grim, Tennis is playful. Where Smith seems to carry the scars of a brutal childhood, Tennis seems to be carrying on the joy of childish exploration. Like Smith, Tennis is comfortable working in a variety of media; unlike her, he seems to have mastered his techniques, whereas Smith appears to be locked in a never-ending struggle with them. 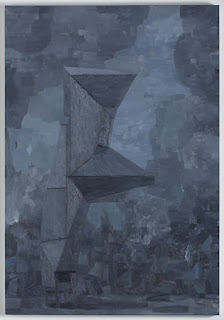 Tennis shows a curious mix of influences: Pablo Picasso, Philip Guston, and Ed Ruscha all come easily to mind when viewing this collection. One room, which contains just five pieces, all dated 2011, represents all these influences and more. A painting titled Droopy (shown at right) is loosely brushed in narrowly limited shades of grey (Guston); another painting with collage (shown below), similarly structured but far more colorful, picks up the Cubist vein (Picasso); and an all-white wall relief that accurately depicts a streetscape has uninflected observation at its core (Ruscha). Then there is a perfectly formed geometric octagonal prism atop a crusty, wooden found table - going in another direction entirely, yet still in harmony with the rest. 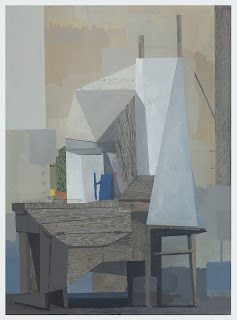 Two crowded groups make up the highlight of this show in the sense of revealing Tennis's process. On one wall, a constellation of 36 drawings, prints, paintings, and constructions mirrors the type of installation used in Smith's exhibition downstairs. These works are variously cast, painted, printed, texturized, stamped, or shaped. Tennis is one of those artists who doesn't worry about how he makes it, he just has to make it however it needs to be made.

In another space, a large display of objects on shelves (shown at the bottom of this post) provides potential hours of perusal - there are 108 little sculptures in it, all around 6 inches tall, all handmade. It's an impressive display of ingenuity and skill, but also of freedom.

A lot of the work in Tennis's show is from the past year, showing an artist who seems to have really hit his stride; it's a pleasure to discover this work, which is exactly the experience intended by the Opener series. 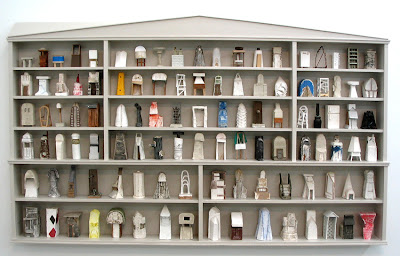 Posted by david brickman at 3:15 PM

From an interview with Kiki Smith (KS) by John LeKay (JL) in answer to a question about the influence of Bhuddism on her work...

KS. Yes, and Shintoism, there's lots of nature beliefs. I think that all of those things are configuring us. We are sort of hybrid; people in New York and these big cites are hybrids of lots of different religions. We probably accept many things from different religions and belief systems. In a kind of ordinary, everyday way. In a kind of unconscious way. I say I'm Catholic because I was raised Catholic, but I wouldn't say I'm a particularly practicing religious person.

JL: I get that from your work.


JL: What about humor in your work?

KS: I think my work is funny. I'm not sure if other people do. Often my pieces are amusing to me.

JL: When you are in your studio, do you ever step back and laugh to yourself?

Dear Dave - - Nice post, an effective combination of words and images. Also, congratulations on the wider exposure you achieved with that recent article. You and your fellow writers work hard and you deserve the wider recognition!