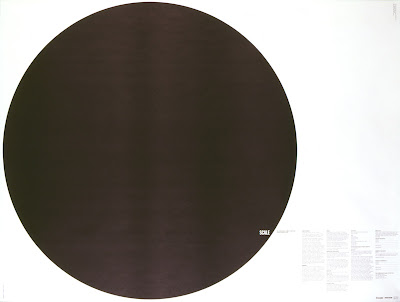 It’s not often that a graphic design show appears in a gallery or a museum and even less often that one shows up in the Capital Region. That’s why it is pretty exciting to see a show of the magnitude of Michael Bierut: 30 Years/90 Notebooks get curated specifically for The College of Saint Rose’s Esther Massry Gallery in Albany.

Bierut, a partner in the renowned design consultancy Pentagram, has had a brilliant career, designing for a host of national and international clients. He is the author of 79 Short Essays on Design and founder of the popular online journal Design Observer. He’s a senior critic at Yale School of Art and frequent guest speaker at design conferences and organizations across the country. His work has won every design award there is to win, including the prestigious American Institute of Graphic Arts medal.

What distinguishes Bierut’s work from much of the design we see on a daily basis is that his pieces use clever, conceptual twists that create messages we have to think twice about. His ability to do this so poignantly is grounded in his knowledge of the subject at hand, his understanding of how to use modernist form to imply meaning, and a natural gift: intuitive wit. 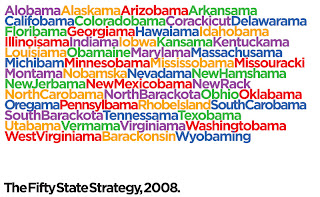 Most of the pieces in the show are posters and most are in black and white. Sometimes the work has (what appears to be) such a simple concept you wonder why you hadn’t thought of it yourself. Yet the beauty comes from just how profound he makes “the simple.”


In one of the few multi-colored works - Obama Fifty State Strategy, 2008, a campaign poster for Barack Obama - every U.S. state’s name is re-presented and strung literally together without word spacing. Separated only by color, we read the play on words starting with Alobama and proceeding alphabetically through Wyobaming. 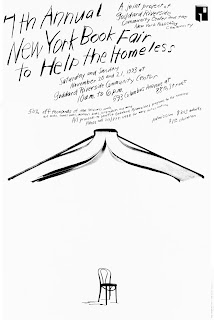 In the 7th Annual Book Fair to Help the Homeless, Bierut turns a black-and-white image of an open book upside down to create the roof of a house. At the bottom of the poster is a small, out-of-scale, solitary wooden chair. In a poster advertising the play The Well of Water, at the Parallax Theatre (one of many posters for the theatre in the show) we see a stark charcoal line drawing of a woman’s hair and upper torso. The rest of her face is created from stylized photographs. The eyes are hot and cold faucet knobs, her mouth the spout of the faucet where the water emerges. What is he saying about The Well of Water using a faucet metaphor to represent a woman's face? One would have to see the advertised play to find out.


There are quite a few stunning pieces in the show designed for the Architectural League of New York. Usually their purpose is to announce a lecture, or an event series. My favorite is Scale. This 36-by-48-inch horizontal has a solid black circle just under 36 inches in diameter anchored to the left edge of the poster. On the far lower right end of the circle is one word reversed out to white. The typography - all caps, san serif bold letters, not more than 1/4” in height - reads “SCALE.” The sheer literal contrast of scale focuses us on one of the most defining principles in art and architecture. This is extremely powerful. 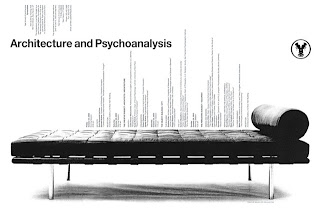 Light Years, also for the Archi- tectural League, overlaps the letters of these two words laid directly over the other in varying translucencies. Without any literal illustration or photography, the layering of the letters on a solid black background visually suggests distance over time as we read the words “light years.”


Another set of posters for the Yale School of Architecture runs the gamut of Bierut’s thinking. Architecture and Psychoanalysis Symposium is both clever and funny. A modernist, 1960s-style psychiatrist’s couch is turned 90 degrees running vertically up the side of the poster. At a moment’s glance our minds transfer the image of the couch into an architectural structure/building.

Then we realize what we are looking at and can’t help but laugh at being let in on the visual and verbal play. Furthermore, we realize that, although the poster was installed vertically, it could also be presented horizontally (as shown above). It is more difficult to read the detailed text in this orientation, but that text now takes on the role of the architectural reference, suggesting a city skyline. 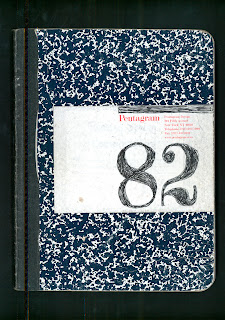 So what does the title 30 Years/90 Notebooks have to do with the show? There are two cabinets displaying many of Bierut’s black-and-white composition notebooks that he started using in 1982. He has accumulated 92 books in his 30-year career and can’t go anywhere without his most current notebook. They are used for everything from client meeting notes to thoughts on design, miscellaneous ideas, doodles, conceptual sketches, and working out his design process on any given commission. Many of the displayed pages allow viewers to make connections and see the thinking behind the work on the walls of the gallery.

A commemorative poster was designed for the exhibit by Bierut himself and is available for sale at the gallery, signed or unsigned. Michael Bierut: 30 Years/90 Notebooks is on view through January 22, 2012.

Guest reviewer Sara Tack is principal artist at Smith and Jones and adjunct professor of visual communication & design in the Electronic Media Arts and Communication department at Rensselaer Polytechnic Institute.
Posted by david brickman at 2:10 PM

Certainly sounds like a show worth seeing. What Sara says is so true – it's not often you get to see a show of a contemporary designer that displays the works as well as some of the thought process behind those works.

Congratulations to Sara for such a thoughtful piece on the exhibition and to David for organizing a handsome layout with many choice examples of Michael's work. The exhibition has had a large impact on our students and gallery visitors. We appreciate Michael's interest in supporting young student artists/designers and encouraging them with his thoughtful lecture. Your viewers can access his September 30 presentation on the homepage of the gallery website: