The Albany Patroons, and other loose ends

Although basketball is not a visual art, I am a fan and a player, and I am very happy to be able to say that I attended what was very possibly the last game ever for the Albany Patroons and the Continental Basketball Association (CBA) on Sunday night at the Washington Avenue Armory in Albany.

But first, for you art lovers, here's an aside worth pursuing:

A photographer I know, Bill DeLanney, has a show at Fulton-Montgomery Community College that is nicely introduced in this blog entry by former Gazette colleague Bill Ackerbauer:
http://www.leaderherald.com/page/blogs.detail/display/276.html

I first met DeLanney several years ago when, still new at this, he came to me for a critique. I loved his work then, and now so does just about everybody else (such as restaurateur Angelo Mazzone, who filled his Aperitivo dining rooms with DeLanney photos). I haven't seen the show at FMCC, but it will surely be as strong as everything else DeLanney does. Check it out if you can; it's there through March 13.

And now back to the Patroons.

My enthusiasm for Albany's professional basketball team goes back to the '80s, when I had a gallery not far from the Armory and began attending games after work. The team had a run of great years back then, in which a number of players went up to the NBA (one, Mario Elie won multiple NBA championships post-Patroons, including one as a starter with the Houston Rockets) and a string of three coaches also became NBA stalwarts (the late Bill Musselman, George Karl and Phil Jackson).

In those days, the Armory regularly packed in upwards of 4,000 people for games, and the place literally rocked. While last night's attendance was announced at a perhaps generous 1,788, there was still enough energy in the house to bring back a taste of the good old days, and the Patroons fed off the crowd to mount a strong comeback to nearly win a terrifically tough game. Instead, they went down fighting, losing the championship-deciding game 109-107 in overtime to a very talented Lawton-Fort Sill Cavalry team.

It was a great show for a die-hard group of fans - and, I hope, not a swan song for professional basketball in Albany or for the CBA as a whole. For an excellent full report on the game by the Times Union's Tim Wilkin, go to http://timesunion.com/AspStories/story.asp?storyID=768243&category=SPORTS.

And now, back to art. Last week, I rode down to New York with my friend John Hampshire for his second exhibition at Chelsea's Phoenix Gallery (http://www.artinfo.com/galleryguide/20133/6671/120007/phoenix-gallery-new-york/exhibition/vimala-steadmanjohn-hampshire/). Because John is a friend, I will not be offering a critique of the show - but I can say without conflict that he is one of the regional artists to watch, and his work at Phoenix is a good example of why that is. John employs a mind-bogglingly complex system of markmaking (in both black-and-white and color) to create images that are both peculiarly abstract and highly realistic. He presents one color painting and four black-and-white drawings in this show, through Feb. 28.

Another exhibition I saw on this trip was a total knockout: Recurrence: Aaron Siskind at Bruce Silverstein (http://www.brucesilverstein.com/) is a tour-de-force of exhibi 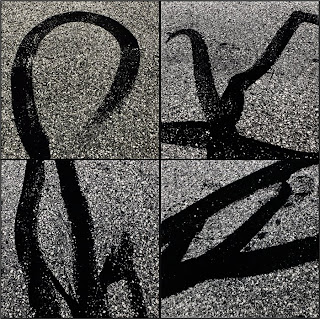 tion design that features a dazzling array of vintage Siskind prints in several rooms that make the most out of Siskind's full black-and-white palette (shown: Vermont 1987, four gelatin silverprints).

The work is presented in groups, some in a grid arrangement, some stacked or lined up, but always to great effect in keeping with the show's intention of exploring the theme of recurrence in Siskind's work.

The pictures are all matted in white, but the framing color varies from group to group - some are white, some a lighter shade of grey, some a darker shade of grey and some black. Also, the gallery's walls are variously painted white and shades of grey to complement this presentation, and it works extremely well.

I comment on the design of the show, because too often a strong collection of work fails to connect with me as a viewer because of insufficiently thoughtful presentation. It is also possible to go too far, getting cute or overbearing with labels and such; so I really appreciate and commend a gallery when they know how to do it just right. This was my first visit to Silverstein, but it surely won't be the last. The show has been extended through March 7, as has the concurrent exhibition by Shinichi Maruyama, which I also wholeheartedly recommend.
Posted by david brickman at 2:48 PM