Like all arts and cultural organizations, The Arts Center of the Capital Region http://www.artscenteronline.org/ has seen some pretty hard times lately. When the former Rensselaer County Council for the Arts changed its name and relocated to the spiffy building it now occupies on River Street in Troy in January 2000, things looked fabulous for the multi-media presenting and educational center. It had received a $1 million grant from the state and was swimming in goodwill from many directions. 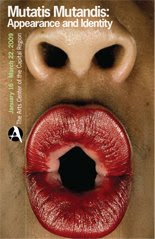 At its peak, in 2002, the ACCR had a full-time staff of 11 (plus two part-timers), including a gallery director who curated most of the exhibitions. Now, there is less than half that staff (five full-time, one part-time) and no gallery director or curator. So it is significant that the talents of Rachel Seligman, director of the Mandeville Gallery at Union College, have been tapped as guest curator of the current exhibition in the ACCR's main gallery.

Mutatis Mutandis: Appearance and Identity is a title that evokes both the exotically unfamiliar (that's how I see Latin, anyway) and the all-too-familiar (identity and all its permutations). I just can't understand the ongoing fixation in our culture with identity, and its infiltration into art exhibitions is almost unbelievably complete. How can this be so fascinating to so many people? Why is that?

Here's my take on identity: Each of us (with a very small minority of exceptions) is either one gender or another. We all have a certain age, which can put each of us into a category. If we are American-born (or born into some other nationality) then that is a part of our identity. If we have immigrated or emigrated, then that new nationality gets added on. Racially, it gets trickier, but if you're not white you usually either clearly identify with some other label (such as Asian or black or Hispanic) or you consider yourself biracial, an increasingly popular choice that I think makes a lot of sense.

After all that, there's sexuality - straight, gay and bisexual are the major options and then there are a few extreme minority alternatives. Beyond that, we can identify by professions or trades, or by virtue of activities, such as artmaking or sports or collecting stamps; that is, you are what you do. There are also family groups we go in and out of, and friend groups that change, too. Then there's religion, or no religion, as a further mark either acquired at birth or chosen.

Bottom line for me: Not that interesting! Whatever somebody's identity is, that's really for them to figure out and live with as happily as they can, not for everybody else to be a spectator of. What I find interesting is what someone does, how they think, how they see things, how and what they express - not who they are.

So, now that I've gotten all that off my chest, let me consider the Mutatis Mutandis exhibition. The other key word in the title is "appearance," and the fine little catalog that was produced to go with the show has an introductory essay by Seligman that gets right to the point of that:

What we look like helps determine who we are and how we are understood by others. ... But appearance can and does get changed. ... The artworks in this exhibition are portraits, created by artists who significantly mediate the way we view their subjects, and through that mediation, they offer an examination of the forces that shape our assumptions and biases. Their explorations of identity reveal the fluid ever-changing nature of identity, the ways we construct and shift our identities and how appearance is a tool in the construction and repeated remodeling of identity.

This excerpt from a much longer introduction supports my own impression of the exhibition after viewing it for the first time - that it is primarily about transformation. In a way, all art and perhaps all of life is about transformation, a topic I think we can all readily sink our teeth into. To make an image of something is to transform it. To live from one minute into the next is to be transformed. One doesn't need to think about it or focus on it to believe that our appearances and our identities can change or evolve. Still, the most significant philosophical question always remains, and we are always trying to nail it down: Who am I?

Does the work in this exhibition engage these topics successfully? I wish I could answer with an enthusiastic Yes!; instead, I give a shrugging sort of, I guess. The best pieces in the show are well-crafted and have both originality and that sense of inevitability: Clive Smith's series of 30 nearly identical portraits of his spouse, titled with and without Jennifer for 33 weeks talks intimately about a relationship that one wants always to be the same - reliable, secure - but that still slips and slides through the fingers. His skill as a painter, dedication to the weekly face-on depiction of Jennifer, and the honesty embodied in the three blank spots where she wasn't with him, combine to hold the viewer's interest in the serpentine series.

Jason Horowitz's three rather large and sharp color closeup photographs of selected details of the subjects' heads are attention getters, but they are also quirky enough to be enduringly fascinating. I found most of the other photographs in the show to be derivative or weak, except one diptych by Melinda McDaniel that consists of fragments of a black-and-white self-portrait pinned to birch panels, resulting in a mosaic-like sculptural effect in very small scale that draws you in to examine it closely. Several of her other works do that more literally, by means of big magnifying glasses that each focus in on a tiny color self-portrait with an applied, carved, wooden Pinocchi-nose. A clever enough idea, but not one that I feel bore repeating so many times.

The inclusion of a single object by Japanese artist Yasumasa Morimura is really a tease. In it, he has portrayed a fairly convincing version of himself as a nude Marilyn Monroe, posed on a red background, and mounted to an accordion-folded fan. Lyle Ashton Harris's two Warholian self-portraits as black stereotypes are old hat; AJ Nadel's Polaroid transfers, too.

The show continues through March 22, as does a fine solo installation by Katharine Kreisher in the cozy President's Gallery, titled Everything in its Place; and the faculty/student exhibition Portraits and Self Reflection, placed upstairs (where I thought the best work was by a student, Linda Bacon).
Posted by david brickman at 6:00 AM

I was under the (mis)impression that there is/was an exhibition committee at the ACCR/RCCA which determined shows. My sense has been that artists and curators submitted proposals and the committee decided which shows would be mounted. I always assumed that the Executive Director and the Exhibition Coordinator had an amount of influence or sway, but that the committee made most of the decisions.

Who knows where to download XRumer 5.0 Palladium?
Help, please. All recommend this program to effectively advertise on the Internet, this is the best program!