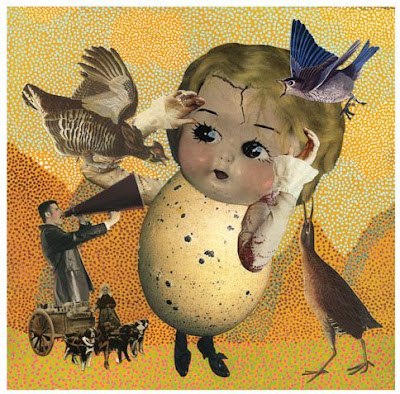 Primitive, sexy, bizarre ... these are a few of the words that immediately spring to mind when confronted with the mixed-media works of Robert Gullie on view at Amrose Sable Gallery in Albany www.amrosesablegallery.com through May 24.

Titled Way Out, it is the last exhibition at the sweet little storefront space run by Elizabeth Dubben, and it fits there like a hand in a glove (though Gullie would probably prefer to put the gloved hand on an eyeless mannequin in a wheelbarrow being pushed across Mars by a giant raven).

There's no avoiding the Surrealist/Dadaist heart and soul of this work, with its insistent randomness - but it does help chase the sadness away for the gallery to bow out on such a fun-loving note.

Gullie's 20 smaller original collages (each a foot square) are accompanied by one four-foot-square original and four pigment-print enlargements, all made since 2008 in what must have been a feverish state of creative inspiration. Only the simplest few of these seem to have come easily - the rest are quite labor-intensive and some are quite complex, with constellations of colored dots painted among paper cutouts that derive from diverse sources: fashion magazines, travel and art publications, and Gullie's own photographs.

Among Gullie's subjects are dolls, animals, African masks, antiques, birds, and food items, all intersecting in that cockamamie way he seems to love. Color is a significant player, too, especially in certain works, such as the serene Pink Angel and the joyously garish Hand Dance; but other works make great use of black and white, too.

Many of the mixed-media pieces (all of which are square) feature a single or dominant figure against a busy but flat background that tends toward the ethereal. With the large one, titled UpOn The World, Gullie has created a dark planetary shape and a blue and white sky for a panoply of figures, many of which are plucked directly from the other works, to cavort in.

UpOn The World, being so much bigger than the others, affords more space for a sense of narrative to develop, while most of the smaller pieces, though complicated, are relatively one-dimensional. With all that effort involved, it can be a bit unfulfilling to have no clear meaning emerge, or to be held back from getting involved in a piece by the physical or visual flatness of the image.

I found myself more drawn to the simplest of Gullie's pieces, titled Socrates the Butcher, which is also one of the most recent and may signal a change of direction for the artist. It is no less surreal than the others, and therefore deliciously ridiculous - but it is also delightfully sublime.

I wish Dubben and all her artists well in whatever future Amrose Sable will find - the physical space is closing, but the entity will retain an online presence and, we hope, will re-emerge in the three-dimensional world one day soon.
Posted by david brickman at 5:29 PM