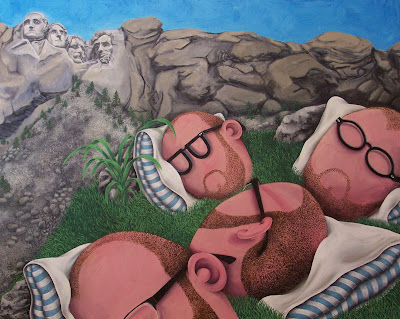 There may be a bit too much of a good thing at the Saratoga Arts Center Gallery http://www.saratoga-arts.org/ this month, where the show Wandering Intention brings three Albany County artists together in a grand congress of transmogrification.

Deborah Zlotsky, Sergio Sericolo, and Brian Cirmo are all well-known on the local art scene, and with good reason, as each is an able and original image-maker. While there are clear similarities among their work, that may only seem obvious because of the show - it still seems to me that the idea to bring them together was a stroke of genius, and the inclusion of both paintings and graphics by each artist enhances the veracity of that assessment.
This does not mean, however, that the large, almost sprawling exhibition is without problems. But an ambitious exhibition with problems is far more satisfying than a show that doesn't strive, and far more stimulating, too. Chief among those problems is the installation - and, at the same time, the installation is one of the show's chief assets. I'll try to explain that conundrum, and then I'll go on to describe each of the artists' work individually.
Exhibitions Coordinator Laura Colomb has intermingled the three artists' work throughout the spacious gallery, making groupings of all permutations on different walls. In a smaller show, I think this would work wonderfully, because it makes the viewer consider the relationships among this trio and understand aspects of each artist's work in ways they probably wouldn't otherwise. But in a show this big (there are 13 pieces by Cirmo, 18 by Zlotsky and 14 by Sericolo), it leads to some confusion, as it is difficult to focus on each individual artist; this challenge is compounded by the diversity within two of the bodies of work. 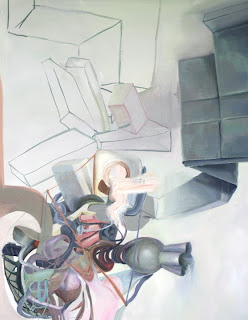 First up, in the reverse alphabetical order of the show's title, is Zlotsky (I can't help but think she must be pretty glad that somebody finally put her name first on a list). Recent years have seen her depart from a realistic style to take on abstraction, as well as surrealism, both in painted color and graphite gray. She states: When I work, I’m like a dowser with a forked stick, searching for signs of life.
The show includes paintings, both fairly large (the image above is of one about two by three feet) and very small (in the 5x7-inch range) and graphite drawings on Mylar. The larger paintings have the feel of studio experiments - some look distinctly unfinished - and are, for me, unresolved.
The smaller paintings, not just because of scale, are far better resolved, whether in terms of color or composition - I'd say Zlotsky is more comfortable working small. And that's OK, as these are truly like little gems and not at all lacking in power.
Best of all, though, are the drawings, in which Zlotsky creates as if by magic creepily biomorphic forms that are both utterly abstract (made up of squiggles of powdery material) and super-realistic (rendering recognizable bits of skin, hair, and organs). For all the works, Zlotsky has applied titles that are newly made words - Pivel, Quish, and Wattobottomy are examples - putting her in a special category of creators who add to our vocabulary of forms and words.
Sericolo is also a shape-shifter, working spills of paint and turpentine into recognizable, surrealistic landscape images and reworking antique etchings to create surprising and sometimes beautifully hideous results. "I set out to depict nature as it might actually appear," he writes, to create something "that is, though fantastic, essentially more real." 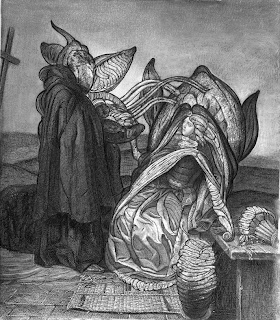 Sericolo includes fairly large paintings and quite small drawings in this exhibition and, again, while the paintings are capable of holding our attention in both the full image and the minute details, it is the smaller works that maintain our fascination. Described as "razor blade and graphite drawings," they also use extensive erasure to transform their source material of story or silver-catalog illustrations into fantastical scenarios that feature unknown life forms suggestive of rampant mutation or mutual destruction (one is shown above).
Altogether, Sericolo's is a coherent vision, albeit somewhat macabre, and it is not surprising that it was rewarded with an extremely competitive NYFA grant a few years ago. He is one of our strongest artists.
Cirmo is somewhat the odd man out in this trio. His nine paintings (one is shown at the top of this post) and four drawings in the show are a consistent group that depict a landscape (or cityscape) animated by a faceless, often bodiless figure with nubby hair and beard, and heavy black glasses. This everyman character is a stand-in for Cirmo himself, who is inspired by the distinctly American quest for freedom and, perhaps, identity.
" ... like Kerouac ... or Guthrie," Cirmo writes, "my modern-day hobo is truly free and truly mad." With the clear influence of late-period Guston, these cartoonish vignettes often include natural elements, such as plants and rock formations, and lately are including blue-striped pillows. They also have been known to allude to war and other forms of violence, sometimes becoming seriously blood-spattered in the process.
Cirmo is a curious cross between hopeless optimist and shrugging realist. He has the guts to make art that is neither pretty nor necessarily comprehensible, and for that he should be commended. So should the Arts Center for mounting this fine, challenging exhibition.
Posted by david brickman at 2:53 PM