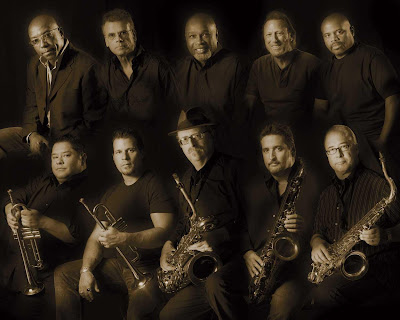 This is not a news flash - it was announced a couple of weeks ago that my favorite band in the history of the world would be coming back to Albany for a free concert this summer - but I need to add my enthusiasm to the mix.

So put it on your calendar: Tower of Power will play Alive at Five on Thursday, July 30, in the Corning Preserve. The last time TOP http://www.towerofpower.com/ played this series, around five years ago, the show was moved to a vast parking area under I-787 due to stormy weather, and the band blew us all away. Band leader Emilio Castillo summed up the experience in his usual understated way, opining that "under the bridge is a cool hang!"
If you don't know (or remember) TOP, just remember this: Their unique blend of funk, soul, jazz and salsa - also known as rhythm and blues - spawned hits in the '70s that haven't grown stale. What is Hip? remains a valid question; You're Still a Young Man still resonates with soulful yearning; and Bump City (Down to the Nightclub) may evoke the disco era but it hasn't stopped speaking to the fundamental human need to get down. Their newer tunes are just as good (if not as famous), and they have never lost the beat that got them started in Oakland, Calif., in 1968.
TOP just finished a tour in Japan, and we will be blessed to have their tight horns and hot licks back stateside this summer. The week following their gig, Alive at Five hosts the Neville Brothers, and the week after that it will be the original Wailers, for a triple shot of soul that will cure whatever ails you. If it doesn't, then there is no cure.
See you there.
Posted by david brickman at 11:34 AM