Chesin and Spellmeyer at Visions Gallery The chances are pretty good you've never heard of Lorraine Chesin - I hadn't, either, before her unassuming but strong abstract works began appearing a couple of years ago at the annual one-night Vacancy shows sponsored by Historic Albany Foundation.

I bought one of her pieces (for a shamefully low price) at last year's Built show, and had it hanging in the living room before I realized it was both an abstract design and a quite accurate rendering of a view out a downtown window. The same understated, dual-purpose nature of Chesin's paintings is abundantly in evidence at a two-person show she shares with photographer Susan Gill Spellmeyer at Visions Gallery in the Roman Catholic Diocese of Albany Pastoral Center at 40 North Main Ave. through July 10.
Titled Uncommon Perspectives, the show features six paintings and about a dozen needlepoints by Chesin and around 20 photos by Spellmeyer. Because I had received a card featuring just Chesin's information on it, I went expecting a solo show - and I will stubbornly concentrate here on reviewing just her work. Spellmeyer's, which consists of quite competent color closeups of flowers in near-abstract, pastel-hued images is worthy of attention but didn't particularly hold mine.
Chesin has an unusual back story for an emerging artist. She retired in 2002 after 10 years as the Rensselaer County Commissioner of Mental Health; before that, she was a social worker, and before that, a high school art teacher - but even that career came to her relatively late in life, as she was already 35 when she got her art degree from Skidmore College. 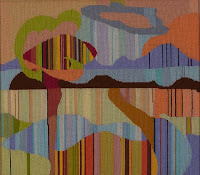 So we're looking at a painter who is both new and not new; the work has the energetic freshness of a young artist's, but feels much more steeped in time; and the needlepoints hark back to the days of '60s macrame, yet their Modernism really harks back much further, to the Arts and Crafts movement. Chesin's paintings are Modernist, too - they closely resemble work by Arshile Gorky and Arthur Dove in their fusion of shape, color, and line to both reveal and conceal their subjects, which are groups of people. 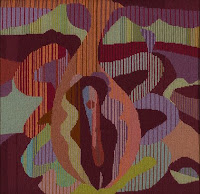 I have no idea how many serious artists have chosen to work in needlepoint - or, for that matter, embroidery, hooked rugs, tapestries or weaving - but I sense in the textile media two key aspects: they are traditionally feminine, and they are an underdog (like other "crafts") in the art world. Chesin makes her own designs and works them into very carefully assembled constructs of colored thread, often incorporating complex striping, and they are representative of typical subjects: landscape, still life, portrait. Do they break new ground? Possibly they do, but they also tread on familiar ground quite comfortably, and they do it very well.
One particular favorite of her needlepoints, titled Road Trip and pictured above right, comes near the start of the exhibition as part of a series of 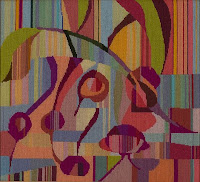 three that cover her major themes. Of the other two, pictured above left is The V Monologues, a clear reference to the famous feminist play; and The Secret Life of Beets is seen at right. I love the titles of these pieces, and I love the way they mess around in that world exactly halfway between representation and abstraction.
The paintings are also in that realm, perhaps a couple of shades closer to representation, but they revel so much in the expressiveness of paint and in interesting palette ranges that I find them more visual than meaningful. Still, their often playful titles bear out their connection to the world beyond the studio: Girl With A Career, pictured at the top of this post, may be autobiographical or it may be talking about today's relentless demand for nurses; and, pictured at the bottom of this post, Hearts Away, with its four figures apparently bearing gifts, could have a number of interpretations.
I would encourage you to go see what you think - the gallery is open Monday through Friday from 8 to 4; it's easy to park along Main Avenue out front, then walk around to the back entrance, where there is handicapped parking available. 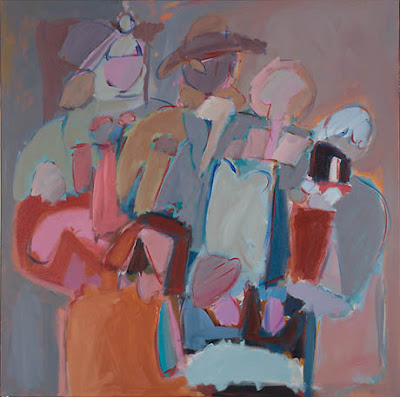 Posted by david brickman at 5:42 PM

You might be interested to know that Chuck Close's recent solo show at Pace Wildenstein in Chelsea, NYC (up until June 20, 2009) is mostly tapestry.

That is very interesting, and not at all surprising when you consider Close's working method (which has always involved grids). His work would translate really well to loom work. Thanks for the heads-up! db