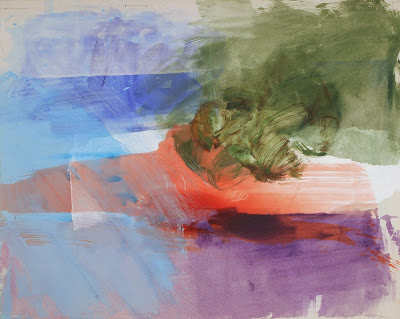 If you do nothing else in the next week, get over to Troy to see The Essential George Hofmann at Martinez Gallery http://www.martinezgallery.net/. The show only runs through June 20, and the gallery has limited hours, but you mustn't miss it.

Hofmann is one of those underrecognized local treasures who quietly goes about his business while we obliviously do the same - the difference being that his business involves making world-class paintings, while ours is somewhat less glorious. After a long career in education, Hofmann retired a few years ago and now, in his 70s and able to devote his time fully to painting, has hit his stride. Though the exhibition title suggests a retrospective, and the show indeed offers examples of work from as far back as 1956, it is quite fully a show of current work (12 of the 20 paintings in it were made in the last two years).

And, having seen other groups of Hofmann's work over the last several years, I can say with real excitement that these are the best things of his I've ever seen. Hofmann works in the tradition of American abstract expressionism, painting directly on paper or linen with bright 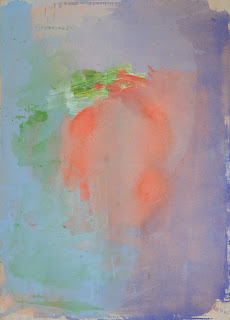 washes of acrylics to create blissful immersions into a world of pure color. The technique allows light to bleed through from the white ground, making his paintings appear to glow from within.

But it's not that simple. Many of Hofmann's paintings show no white at all - the ground may be blue or pink, and the other colors then wash over that ground in vivid tints and contrasts. Exquisite examples abound in this show, such that it is very difficult to choose among them. Above, for instance, is one titled Breaking Joy from 2008-9. The 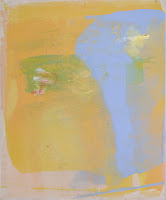 painting transmits the artist's emotions directly to you before the title confirms the ecstacy he must have felt at bringing it into existence.

In another brilliant moment, Blue, In (at left) comes into view like the sun after a gray day. And the best of them all, Rain, Sun (shown at the bottom of this post), just makes you glad to be alive and in the presence of an artist like Hofmann.

One factor in the success of this work is scale. Many earlier pieces by Hofmann were on paper and of a modest scale (around 18x24 inches). These pieces on unframed stretched linen mostly range upwards from 4x5 feet - the biggest, titled Bay and shown at the top of this post, is more than 7 feet long. The effect of making paintings this large is that the colors then fill the viewer's field of vision, allowing you to enter the space of the painting and become surrounded by its atmosphere.

Hofmann may have been hinting at this effect with a 1988 painting on view titled Niger, which is all black marks at the edges of a gray ground, and which does suggest the darkness of the desperately poor country in Western Africa that bears its name. It's a fine painting, and I'm glad that its inclusion in the show provides this opportunity to compare it with the more colorful ones.

The other earlier works provide similar opportunities, such as the earliest, a cleverly patterned portrait of a dog titled Checkers, and one called Blue, Green from 1960 that is satisfyingly minimalist. These early works are shown in the gallery's back room, along with more current pieces that are thoughtfully displayed. I particularly enjoyed the relationship among three of them - side-by-side pieces titled Actual Ambiguity and South, West, that play the blue in one off the pink in the other, while the wall directly opposite holds Passing, where those two colors come together.

The back room also includes a pedestal with three wonderful, stormy maquettes about 8 inches high and 14 inches long that appear to be brand-new and suggest even more ambitious ideas from Hofmann's studio. Is he planning to do stage sets next? I certainly don't see a reason why he shouldn't extend his encompassing vision in that direction. The way Hofmann can wrap you in a world of light and color, the theater may be the natural place for his next audience to be seduced. 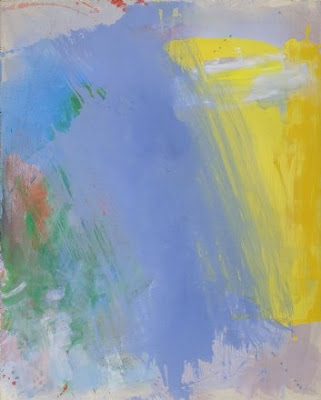 Although his works are very pleasant to look at, I think the reason Hofmann's paintings resonate with me as much as they do lies with his understanding of what American abstract expressionism can be. In his statement found on his web page he cites statements made by others in reference to our relationship with nature and the way that art very often succeeds only when it is able to undermine what is established, spawning from a visceral initiation. We know that the movement was, if only loosely, about spirituality and sign, and Hofmann’s work falls magnificently into this canon.

It is my feeling that although art may almost always be without function, it is never without purpose. Hofmann's statement seems to support this sentiment and it comes as no surprise to hear that the man was an educator. He is remarkably aware of himself as an artist, the value of art, and probably much of what matters. What a gem to have in the capital region. It seems his work would be at home in the Empire State Plaza Collection, but you think about that notion for too long, as I did, you realize that it’s almost a good thing that it isn’t.