Art on Lark and more 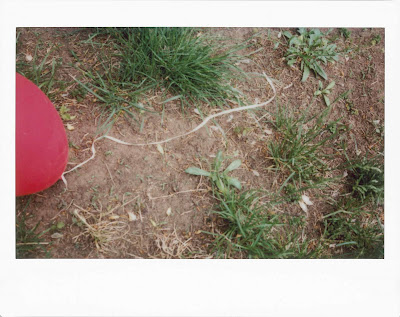 It was a big weekend for art in Albany and, though I was only able to catch a thin slice of the pie, I still have quite a bit to report on. Saturday's Art on Lark followed 1st Friday, making Lark Street the epicenter of activity, and the weather was perfect (unless you hate perfect weather, in which case it wasn't).

I missed 1st Friday altogether, but made a point while 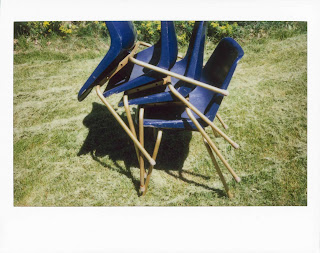 I was out enjoying the whole Art on Lark scene of seeing one of the shows that had opened the night before. Though the Lark Street BID office was closed during their block party, I managed to talk my way in and peruse Sketches and Drawings: New Photographs by Joe Putrock, a pretty big show of rather small pictures by the hardest working photographer around (one image shown at top, and one above).

Putrock has a new toy, a Fuji instant-film camera that makes 2 1/4-inch x 4-inch prints similar to the old Polaroid SX70s, and he is using it to record life's little moments and chance discoveries. The humble format, unassuming subjects and fairly subdued palette combine to make Putrock's observations quietly fascinating. The show features successful groupings and pairings among the 28 pictures included, and it's pretty terrific. It's also a sneak preview of Putrock's contribution to a three-person show scheduled to be at Carrie Haddad Photography in Hudson in the fall; you can go see it now at the BID and then say you knew him when. 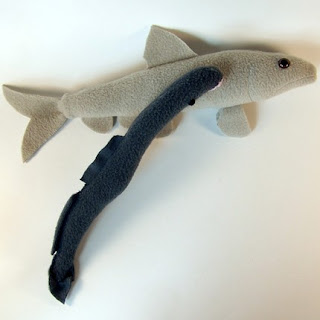 Among the highlights of Art on Lark were the Foy Brothers, who funked us all up pretty good, and some of our area's unsung art heroes, such as Jessica Monsour, Kevin McKrell and the self-proclaimed weird bug lady, aka Brigette Zacharczenko, a delightfully normal-seeming zoology student who makes plush toys of some of your less popular animal types. My favorite was the salmon, with a long, gray lamprey attached to its side by a velcro dot (a variation is shown above). You can find her at http://www.etsy.com/shop.php?user_id=5152027 .

Monsour (http://www.madgirlimages.com/), is a College of Saint Rose and RIT-educated photographer with her own freaky obsessions, 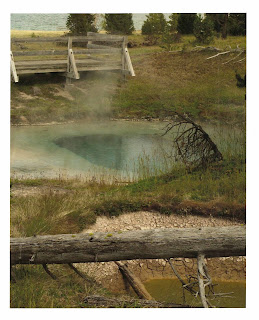 but some of her pictures are more conventional than the super-bizarre creations she is known for. I bought a real nice one that was taken in Yellowstone National Park (shown at right) for a shamefully low price, and that made me happy even as it makes me worried for the future of Monsour and her entire generation (who will never, ever be able to make a living).

Not to be too gloomy, Saturday night brought us to a different vision of the future in the form of a loft party at the home of the Contompasis clan, a trio of brothers whose Contompasis Gallery at 40 Broadway is now on the 1st Friday circuit and stays open the whole first weekend of every month.

Headed up by the eldest brother, Samson, the New York City-style loft features art by a panoply of contributors, including brothers Alex and Max; Samson's lookalike father, Peter (whose sea urchin-like sculpture, turning lazily above the proceedings, bristled with black and silver pool cues); the boys' mother, Jackie Brickman (I liked her new bird paintings best and, yes, she is my cousin); and many graffiti artists.

It was a salon-style extravaganza, with a deejay spinning tunes, guys breakdancing, UAG model of the day Rebecca Schoonmaker shaking her booty on the dance floor, a Betty Page lookalike 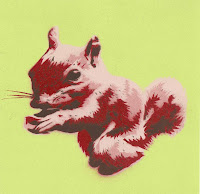 (well, bangswise, anyway) snapping pictures, and lots and lots of interesting art. My wife became captivated by a One Unit print of a cute squirrel (shown at left), which the artist graciously signed after she bought it for the same shamefully low price I paid Monsour, and that made her very happy.

For me, the outstanding creator in this fine bunch is also the most mysterious. I was told that Radical is a seventeen-year-old Mormon who neither drinks nor takes drugs and was probably home in bed at the time (around 10 p.m.), and I'll trust that this is true. You can decide if you trust me on this: if it is true, then Radical is a genius. His drawings and paintings, depicting a strange netherworld of bandaged figures, sinister robo-kitties, syringes and a whole lot more, are almost unbelievably well-crafted, original and consistent for an artist of any age - and I don't say that at all lightly. Let's hope he stays on track.
Posted by david brickman at 1:33 PM

hey hey it's RADICAL! himself. haha just stumbled upon this, defintiely made my night. oh, and it's all true. all of it. thanks for the kind words.