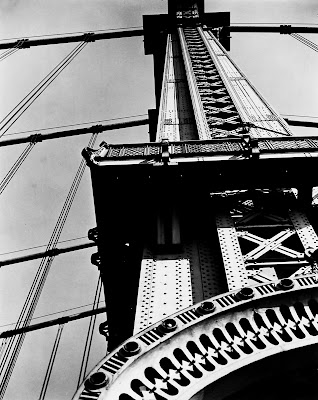 Berenice Abbott Manhattan Bridge: Looking Up, 1936
Abbott, Berenice – alphabetically speaking, this photographer would be at the top of almost any list. But a show of 53 of her best photographs at the New York State Museum titled Berenice Abbott’s Changing New York: A Triumph of Public Art demonstrates that she belongs near the top on her own merits.

Accompanied by excellent exhibit notes from Bonnie Yochelson and some quite interesting ephemera, the show is built around a set of 40 mounted prints that the NYSM acquired in 1940, when Abbott’s project had just been completed. This foresight on the part of the museum’s then director, who had previously put Abbott’s work on exhibit in Albany, is a gift to us all, as the old prints are dazzling in both their perfection and their imperfections. They are augmented by oversized modern prints from the Museum of the City of New York, which help to give the show a more impressive scale and feature particularly strong images.

Abbott, a Midwesterner, apprenticed in photography with the American artist Man Ray in Paris before striking out successfully on her own there, and her technical skills were very finely honed. By the time she returned to New York (where she had been a painter and a dancer), she had salvaged the vast collection of Eugene Atget’s Paris documentation and championed the late actor’s cause as an artist in photography; she then consciously followed his example in taking on the vastness of New York as her subject.

From 1935 to 1940, Abbott applied her expertise with an 8x10 view camera and an apparently indefatigable spirit, roaming the boroughs and recording the chaos and contrasts of a great city in great flux, as the Depression deepened and New York’s many skyscrapers rose above the streets. While her bulky, slow equipment prevented her from capturing fleeting moments, Abbott’s superb eye for composition and nose for dramatic points of view made compelling picture after compelling picture, most of it achieved with the support of a government documentary project that also sponsored the likes of Walker Evans, Dorothea Lange, and Ben Shahn.

All were great, but even among such talent Abbott was recognized as a star. Viewing these prints, it’s easy to see why. There is a modern potency to every image, from a view of curiously Art Deco-styled oyster processing houses to her famous eagle’s-eye views of the geometric puzzle of Wall Street. Many of the pictures use industrial-era architecture and engineering as a counterpoint to older or newer elements, as in Brooklyn Bridge, Water and Dock Streets, with the timeless bridge suspended high above a scene of industrial bleakness, Manhattan’s Oz-like skyline glittering in the distant middle ground. Another great example, titled Murray Hill Hotel: Spiral, recalls Ray’s darkroom experiments with its dark, wrought-iron balconies rising up into the sky opposite a sunlit office tower.

The show is divided into groups by theme: The Financial District; The Lower East Side and Greenwich Village; Midtown and Upper Manhattan; and The Bronx, Brooklyn and Staten 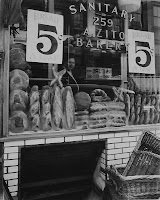 Island. Because the majority of the pictures are just 8x10 inches, they demand close scrutiny, which reveals their almost astonishing degree of detail and subtlety of tones. These early prints are mounted to pebbled gray boards, with carefully inked titles below each photo. Some have chipped edges or are slightly discolored, which adds to their charm. Others derive enough charm from their now lost subject matter, such as a Jewish butcher's storefront, or that of an Italian bakery. They all have stories to tell, and are eminently worthy of the time spent to hear them.
One problem with the installation is that it is placed under low illumination (perhaps to protect the prints), which makes it a challenge for middle-aged eyes like mine. Another is that it may be hard to find if you’re not familiar with the museum. To find it, on view in the Crossroads Gallery through Oct. 4, walk toward the rear area of the museum, past the gift shop and many other displays, until a big black-and-white picture of a Texaco station advertising gas for 14 cents tells you you've made it. Trust me – you'll be glad you went to the trouble. 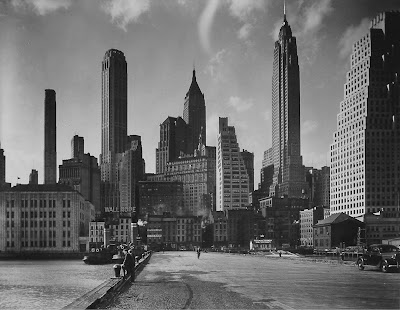 Posted by david brickman at 2:21 PM