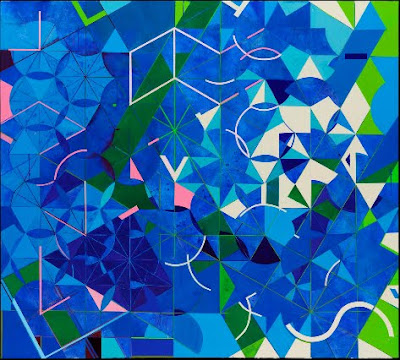 Spring was in the air, and a nice walk for the whole length of Warren Street in Hudson yielded the expected treasure from the region's most concentrated collection of art galleries.

Karen and I went to help a friend celebrate her part in a show, took in others that were having events and openings, and topped it off with a superb dinner at Ca' Mea, where Massimiliano greeted us warmly and invited us to visit him at his other eatery in Cortona, Italy, if we were ever in the neighborhood. For the food, in this case, no need to go to Cortona! 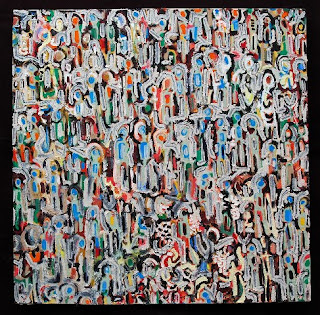 So, on to the art. First up, a collection of four painters presented as View Four, on exhibit through March 20 at Nicole Fiacco Gallery, whose pristine white cube of a room is probably the most perfect exhibition space anywhere north of New York City outside of a museum. The four painters - Robert Roane Beard, Stephen Courbois, Jeanette Fintz, and Enrique Kico Govantes - naturally are arrayed one on each wall, but with almost too much white space to go around and an annoying (for me) total lack of labeling.
Though they are shown in the same exhibition, the connections among them are a bit vague, centering on color and geometric pattern as methodic foci. Taken individually, I was most impressed by Fintz, whose modestly-sized acrylic triptych on wood panels and much bigger pair of acrylics on canvas played a complicated call-and-response. With shapes derived from a systematic application of the circle and hexagon, played out in a bottomless-well of expressiveness, Fintz applied challenging palettes of blue, green, and pink in one large piece called Andalusian Shards #2 (shown at top of post); staring at it is a bit like falling into the sky. 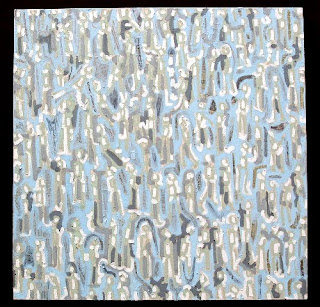 Also inspired by nature - including the human kind - are the four seasonal squares by Govantes (Winter, Karen's favorite, is shown at right; Summer is shown above). I like the energetic brushwork, the strong color shifts, and how Govantes strikes a balance just midway between abstract and figurative. Though it's a clichè to reference the seasons, he does it extremely well - look at the way Summer vibrates and you feel its heat.

Beard's work is directly taken from landscape, some Irish, some Columbia Countyish, and he does it on a very small scale - no bigger than about 5 by 7 inches (one is shown at left). His skill and style are easy to like, but the work seemed a bit frivolous to me, reminiscent of the once-overly popular graphic artist Folon. 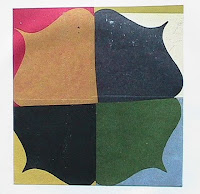 Courbois is somewhat the odd man out in this group: His extremely dry approach to an exploration of muted colors in repeated shapes is quintessential Modernism (which is to say early 20th century). Not properly referred to as a painter, he employs a very subtle technique similar to chin collè printmaking to make contemplative constructions like the one shown here.
This is the kind of work that only serious art lovers can really get much out of - a narrowly focused theme-and-variation that you must really work to appreciate. I'm not lazy, but I prefer artwork that reaches out more ardently to the audience.

That would be a fair way to describe much of what has been brought together for the annual Painted Cities exhibition at Carrie Haddad Gallery, on view through April 11. This year's edition of the show is bristling with positive energy and some very fresh work, including lush "drawings" by Paul Chojnowski that are made from nothing more than water and fire (the one shown at right is titled Evening on the Avenue). 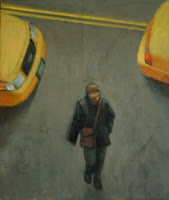 Other highlights include a savvy, atmospheric view of Troy's industrial waterfront by Tony Thompson; Staats Fasoldt's masterful little watercolors; and a group of painted moments by Judith Wyer that evoke great street photography - not by dint of excessive realism but by their skillful observation and cropping (the one shown at left is titled Pedestrian).
An even more popular approach is taken by the Columbia County Council on the Arts, whose 14th Annual Juried Show is on view at the Hudson Opera House through March 28. Judged by University at Albany Art Museum Director Janet Riker, this year's show awarded first and second prizes in 5 categories (painting, photography, sculpture, mixed-media, and works on paper), as well as a best-in-show, so everybody gets a little glory.

Riker is no pushover, however, and the work in the show is strong in each medium, providing a terrific opportunity to get a good overview of a diversity of excellent artists from the region. My favorites are too numerous to mention, though I must credit Hunger Moon, a video by Alan Coon that plays on animal and human locomotion; Car Jack, an amazing, very large drawing on wood panel by Keith Batten; and a simple - but not simplistic - stack of bricks by Jean-Marc Superville Sovak titled It Can't Last (shown at right).
Also presenting a large number of artists in one space is the Limner Gallery, whose Emerging Artists 2010 will be on view through March 27. I confess it was my first time visiting Limner, though it's been open under the wise guidance of an outstanding self-taught painter named Tim Slowinski since 1987 (!!!). It proved to be a great, if late, discovery.
I like a gallery that sets a style, and Limner is very much in that mode. All the art tended toward certain ideas and aesthetics that reflect, but do not mirror, Slowinski's own: carefully crafted, realist or Surrealist, deeply into social commentary. Many of the works showed good chops, but one stood out as truly extraordinary - a color drawing by Roberto Osti called Agnostic's Flight (shown at the bottom of this post). You must see it up close to be totally wowed by this piece, and you will, I promise, be wowed. 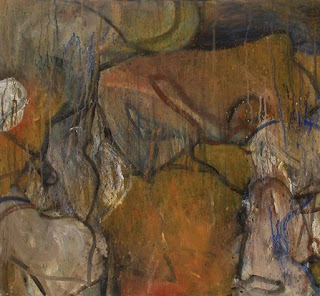 Finally, a show of abstract paintings by Claude Carone is at John Davis Gallery through March 28 and, as I always find at Davis, the work is impeccable. Elegant, warm, but with a tinge of the dark side, Carone's work is evocative without being representative.
This impression is borne out by his titles: Wind in Tinehir (shown above at left) or Glorious Morning, for example, are not meant to merely label the painting. After scanning the artwork, then noticing a list of these suggestive titles, I saw one that sounded familiar. Sure enough, Diver's Vision referred to the very painting I was thinking of - formally similar to the others, but with an undeniable underwater tone.
Other paintings in the show range from bright and linear to mysterious and layered, from the pastel-light to the earthily charred. The size range is modest, from about 8 by 10 inches up to about 2½ by 3 feet, but the surfaces and color relationships are very rich. It's a show not to be missed. 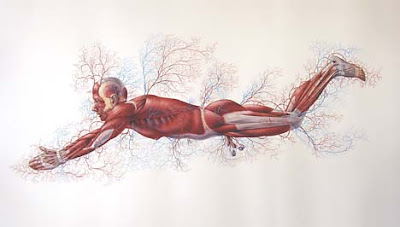 Posted by david brickman at 3:51 PM

Hey Daaaaaaave,
next time give us a call before you come all the way down here and we'd be glad to see you!