Oddly Alive at the Arts Center 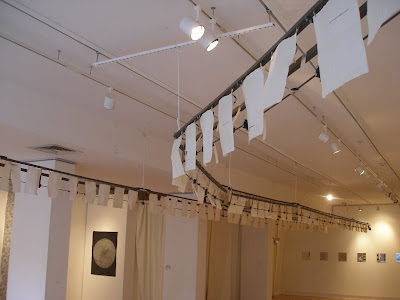 Oddly Alive, a well-conceived show of seven artists' work curated by Lauren Wolk, occupies both the main gallery and secondary space at the Arts Center of the Capital Region in Troy, but it does so in a light way. The art is sparsely placed, with a lot of white space everywhere, and it isn't very dense or colorful work; rather it's on the contemplative and quiet side. Well, there is noise in the show (delightfully), but the slightness that remains is oddly consistent with past shows at the Arts Center, despite its ever-changing rotation of curators. Wolk has written a sensitive and descriptive statement that greets visitors near the entry of the bigger room, and it is helpful in explicating the themes of the show, which include direct exploration of materials such as fabric, glass, and wax; inspiration taken from the biological world; the passage of time; and action or interaction. "Ultimately," Wolk writes, "the show asks viewers to engage in self-reflection as they interface with the works."
For me, that experience had its ups and downs. Most intriguing were the blown glass and steel wall-mounted sculptures by Graham Caldwell, which nicely mingle attraction and revulsion; the startling sound pieces of Ven Voisey; and the wide embrace of Sky Kim's untitled drawings and watercolors.
Caldwell, whose Augur is shown at right above, is able to use color well, but most of his other works here are in shades of white. His innovative application of a combination of materials and the use of armatures to bring the pieces out from the walls is very successful. 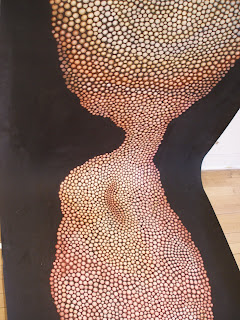 Voisey present only three pieces, two of which are on an intimate scale - the other one runs nearly the length of the gallery's space (shown at top of post) like an overhead assembly line. When you walk under it, it springs to life with the mechanical thwackings of dozens of strikers against tethered paper, bringing to mind the action of a swarm of angry locusts. This is an artist who has matched method perfectly to intention. His message seems to be: WAKE UP!
Kim's works on paper range from a densely-packed graphite page about 24"x30" to a tremendous, colorful scroll that runs down the wall and halfway across the floor (detail at left above). Her marks are individual, even in some sense random, but the radial patterns they create belies her organic, perhaps microscopic, sources.
Also clearly inspired by the world of bugs, or undersea critters, is Rachel Adams, whose Elaborate Autobiographies is shown at right below. Made of wax, string and glass beads, this piece is more still life than animation. Other works of hers are more threatening; one inhabits a corner of the big gallery like giant white worms in a net, while another consists of modular forms piled around a column. 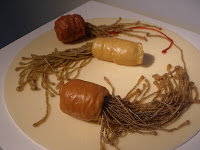 Mayumi Ishino presents what I understand to be the remains of a performance: Seven 12-inch-square mirrors, six of which have deftly drawn self-portraits in colored markers and are severely crushed, and one of which is untouched. All are mounted in a row on the wall, below average eye-level, perhaps so the viewer is not distracted by their own reflection. I can't comment on the performance, but the existing installation left me unmoved.
I also can't comment on Sabrina Gschwandtner's projection piece, as it was out of order when I visited the gallery. The curator describes the piece as an exploration of "the behavior of cotton thread in response to the light and fan inside [the projector]."

Finally, a group of color photographs by Marianne Fourie make images out of light trails traced against a black sky (some shown below). Her titles range from the overwrought to the deadpan (Passion and Pain are two of them, and the others are all on the order of the following: Walking along MacMillan Pier on September 13th, 2008, at 8:21), but they do nothing to elevate these pictures above those easily found at amateur snapshooters' shows.
Overall, I wish Oddly Alive had just a little more spunk. It's on view through March 19.

Posted by david brickman at 5:46 PM