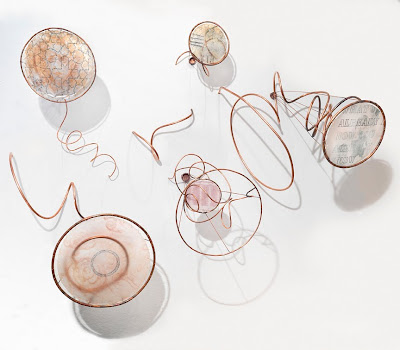 This will be a short review of a wonderful exhibition.
Randy Garber's Reverberations, on view at the Opalka Gallery at Sage College of Albany through April 18, is an unusually cohesive amalgamation of diverse media by a Boston-based artist of strong and subtle vision.
Going in, due to the gender-neutral name, I didn't know whether this artist is male or female; now I do know (and just to brag, I'll tell you I did guess correctly), but will leave that information unstated in case you also want to try to decide that question for yourself just by seeing the work. The dominant theme of the show is sound - no, it's not a sound installation, but it makes repeated references to music and rhythmic resonance, from its title to images of a horn player to drumlike constructions to a marvelously innovative woodcut print on player piano scrolls. 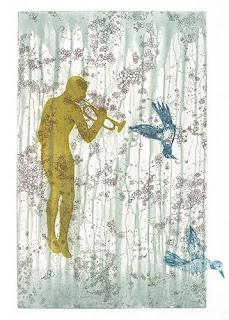 But Garber has other potent themes: transformation is evoked in copper plates that have been etched for printing, but then further etched into decayed shapes and re-used in a wall construction titled Connect; Asian contemplation comes across in three large, vertical, screenlike hangings made of etched and inked copper piping; and nature, whether human or animal, has a presence in many printed images on paper as well as in a trio of biomorphic oil paintings and a group of four small, vibrantly colored gouaches.
Most impressive about this exhibition is the way it totally and perfectly occupies the large, high, white space of the Opalka. I've seen many exhibitions in this space over the years, and it can be a challenge to fill successfully - but Garber makes it look easy. That is, Garber and guest curator Ruth Hall Daly, along with the Opalka's able staff. The fact that many of these pieces were made specifically for this installation shows that it's the result of a very successful collaboration.
One of those pieces (a detail of which is shown in the image at the top of this post) incorporates light but elaborate copper armatures with round fragments of intaglio prints sewn to them, playing translucency off light and shadow in a fabulous confabulation of forms that are mounted directly to the walls. Titled Receive, it is an extraordinarily unexpected and well-executed combination of media.
Language is another theme of Garber's that is woven throughout the show, whether directly as part of the images or in titles. The phrase "what you already know" is used repeatedly, even in multiple languages, as a sort of mantra. It reminds me of a lyric from the Simon and Garfunkel song The Boxer, that says "a man hears what he wants to hear, and disregards the rest."
Does Garber mean to say that we can only see what we already know? If so, the artist has successfully contradicted him/herself by showing us things we most certainly have never seen before.
My only quibble with the show is a small one, but here goes. One prominent piece, titled Echo (and shown below), which has been used to publicize the exhibition, a bit too closely resembles giant, concentrically rolled condoms - and its central image of an open-mouthed woman doing something oddly suggestive with her hands does nothing to disabuse me of that association. 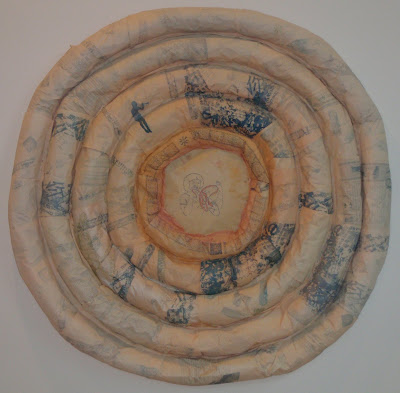 Posted by david brickman at 3:13 PM

Well, why would that be a quibble?

I am calling it a quibble because I am pretty sure the artist didn't intend that association. I'll acknowledge that an artist could make work that refers to condoms or other such items, and maybe even do it in a way that I would applaud - but this piece seems out of place among the rest of the work in the show.