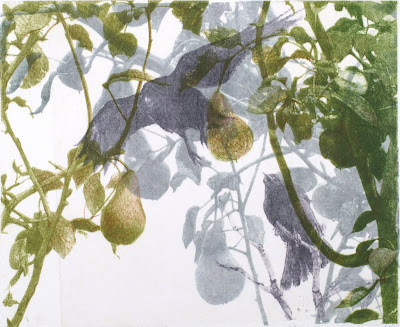 It's a neat trick for a curator: Ask some artists to participate in a show, and then have each one invite another artist to join them. You get freshness, diversity, surprises - and don't have to take much heat if it doesn't really work as a whole. 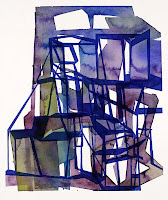 Union College printmaking professor Sandy Wimer has applied this technique to craft a really nice printmaking invitational featuring 10 regional artists and the 10 artists from beyond the region they invited. Here and There: Two Degrees of Separation presents the participants in pairs, with a short statement from each inviter explaining their choice of invitee. There is also a useful introductory essay by curator/printmaker Debora Wood of Northwestern University, which neatly sums up the major techniques and overriding philosophies of the printmaking media for those not well-versed in them (which, honestly, means most of us). 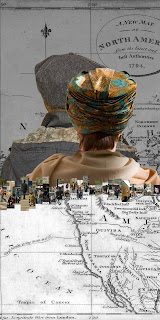 The Burns Arts Atrium at Union College is a clean, well-lit exhibition space, slightly off the beaten track but not hard to find on the campus (behind or around the corner from the Yulman Theater), and its long, horizontal space works well as a frame for this sprawling display of 40 pieces of art.

The local artists are mostly familiar names, and their counterparts are mostly new ones for local viewers; the range of media thay employ is wide, including lithography, woodcut, several forms of etching, monoprints and, of course, digital, augmented in some cases by watercolor or collage. There is no uniformity of style or subject matter, not even between most of the pairs, though the work falls largely within the parameter of being smallish in scale.

It is important to point out that all these prints were made by the artists, who identify as printmakers (whereas many artists who make prints work primarily in other media and use printmaking as a tool for creating multiples, often in ateliers that specialize in helping them to do that). As a survey of what printmakers these days are doing, it's an excellent representation, and the quality of the work is consistently high. 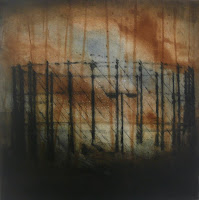 One can approach the show as a sort of smorgasbord, and just enjoy the lovely techniques, strong imagery, and challenging ideas - or you can think about the relationships between the artists who are paired up (not to mention those among the original 10, many of whom have close ties within the local community). I found both processes worth exploring.

I was piqued to find that in every pair but one the inviter chose a person of the opposite sex. I don't know if this is common in the art world as a whole, or more so among printmakers, but I hope it's a sign that we've reached a point of equality between men and women in a realm where that was quite markedly not the case for centuries. 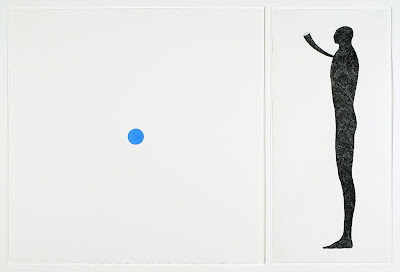 Key to images (from top to bottom):

thanks for looking at the showing and writing about it.
i basically picked jenny because i liked her work and had thought "if i had a gallery, i'd give her a show." then i got home and found the invitation for this. no thought at all about how our work would look together or gender balance.

I have been searching for independent curators that specialize in printmaking.... any other directions you might suggest?