Dan McCormack at The PhotoCenter

You don't have to love the nude female form to like Dan McCormack's photography, but it wouldn't hurt. A survey show of 51 of his pieces, on view at the Photography Center of the Capital District through Feb. 21, depicts almost nothing other than women, all of them nude except when presented just from the neck up, and it does so in a great variety of methods and media.

To those of you who have read my recent review of the Carroll Dunham show at UAlbany, this will sound repetitive, but it happens to be true: This work is not so much about the subject, or the image (though many of the images are quite wonderful) - it is really very much about the process.
In this instance, we are pleasantly confronted with a cornucopia of photographic alternative processes: cyanotypes, palladium prints, silver prints, photograms, and digital pigment prints are derived from original negatives made with everything from a homemade pinhole camera to a four-lens novelty 3-D camera to an office scanner to a Fuji 6x17 Technopan (the dollar range there goes from empty oatmeal box to so expensive that you don't buy it, you rent it by the day). 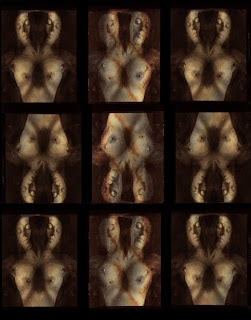 So, what is McCormack about? Like I said: Process, process, process. Oh yeah, and he really, really likes women. Reminds me of Garry Winogrand, a venerated street photographer of the '60s who published a book titled Women are Beautiful, and who meant that in the most sincere and accepting way. McCormack's women are not necessarily beautiful in the classic sense, but he sees them as beautiful and he makes them so in his pictures. He also makes them look monstrous - yet still beautiful. 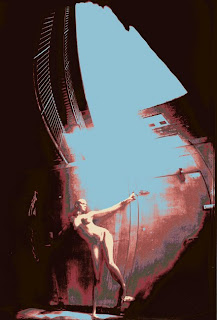 McCormack is clearly very interested in the relationship among images - a great deal of the work shown here is presented in multiple form as diptychs, triptychs and so on. Only a few pieces stand alone - most of those are elegant, diminutive cyanotypes (blue prints) of a woman engulfed by water or lushly, even psychedelically colored pigment prints. The latter group involves a lot of solarization, which can have some pretty cool optical effects on its own, but then McCormack works in layers and layers of vivid pigment to complete the transformation.

Tiny images contact-printed on standard silver paper from the four-lens camera's negatives are grouped by fours, up to 24 together, which evokes Muybridge, but without the continuity. Taken to another level are several pattern prints that repeat almost to infinity, making a grid that looks more like a weaving than a photograph.
The selection and installation is very thoughtfully done. Despite the number and range of the works included, it is easy to experience it as a whole - this is a tribute to the curating of the PhotoCenter's Katy Wright, but also to the clarity and consistency of McCormack's vision.
Though he has a long history of working in this region, and has shown his work a whole lot, McCormack's solo shows are few and far between - try not to miss this opportunity to see both the breadth and depth of an important, under-recognized artist.

Installation view provided by the PhotoCenter; all other photos by Dan McCormack

And, while you're in the neighborhood, check out the current exhibition at Martinez Gallery on the Broadway edge of Monument Square, where a show titled What are You Doing Now? includes a strong cross-section of regional and international artists, including George Hofmann, Leigh Wen, Gay Malin, George Simmons, and Caren Canier (whose small painting/montage is pictured below). Hours are 2-5 p.m. Weds-Sat and by appointment, (518) 273-9377. 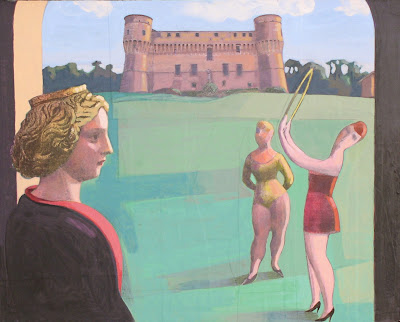 Posted by david brickman at 5:11 PM