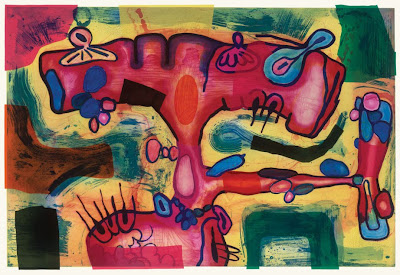 When's the last time you saw a retrospective solo show of prints by a major artist? For lovers of etching, lithography, wood engraving, linoleum cut, monotype, even digital – it's time to rejoice. The exhibition Carroll Dunham Prints: A Survey at the University at Albany's University Art Museum – a massive, rollicking installation of more than 100 works on paper – is a unique opportunity to revel in these and many more of the endless technical variations that fall under the heading of printmaking.

Known primarily as a painter, Dunham began to experiment with printmaking in the mid-'80s – and he really got into it. Covering a 20-year span from that beginning to the recent past, the show will surprise viewers with its versatility, scale, and brilliant color. It will also shock more than a few people with its content.

A little sign in the museum's sober-to-the-point-of-ascetic entry foyer greets visitors with the warning that "some [of the] work may not be suitable for all audiences," and, sure enough, many depictions of genitalia wait inside. But the reality of Dunham's obsessively biomorphic imagery is hardly pornographic. Though insistently graphic (and often quite absurd), the R-ratable content of this work is all but washed away in a sea of process.
One thing I regret from my days as an undergraduate studio art major is that I never took a printmaking course, and I feel that lack now as I seek to express just how deeply imbued in process printmaking is. It is (for some) a dreadfully laborious medium. But it offers infinite variation and, emboldened by the possibility of large multiple editions, draws most serious artists in sooner or later. These days, there are a number of printing shops that provide artists who are not versed in the technical details of printmaking the expert assistance necessary to fully realize their vision in ink on paper. Dunham has taken full advantage of such opportunities, and the results are nothing short of spectacular. 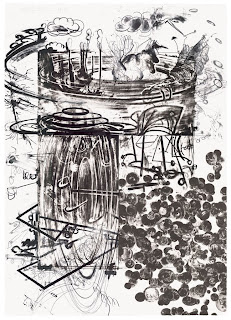 Beginning with some relatively pedestrian monochromatic lithographs from 1985 (example at right), the show quickly accelerates into vivid color, building to prints that are as large as they are complex – up to 26 templates go into some of them, and many are five feet or more across. Bigger is not necessarily better, of course, but I mention size to emphasize the point that today's printmaking is no longer about your great-grandfather's 4-by-6-inch bookplates.
In Dunham's case, big or small, much of the work is created in series, which adds to the viewing experience but is at times a little too repetitive. One such series (I think it has 17 prints in all) hangs in the upstairs Nancy Hyatt Liddle Gallery, and feels almost like a separate exhibition. While this 2004-6 series, made in gestural black strokes on creamy white paper that organize a geometric rendition of landscape, provides relief from the cartoonish madness of much of the rest of the work in the show, in the end it pales by comparison.
Another recent series of five etchings with aquatint, elegantly presented unframed in a wood-and-glass museum case, directly predates the untitled lithographs. This group creates a bridge between those studies and Dunham's more sensational work by combining bold, dark strokes and abstract design with sweet and subtle areas of color. The title, Closing In, may be intended to suggest that the artist felt like he was closing in on something special with this series.
The sense that these small, square prints are significant is reinforced by the presence nearby of several much larger pieces, some of them eccentrically shaped (example below). These most recent works in the show – some screen-printed, some monotypes – share the type of marks and sensuality that characterize Closing In. It's good to see that, like most artists worth their salt, Dunham seems to be getting better as he matures.

But that doesn't mean his juvenile side isn't also worthwhile. Though few of the pieces in this survey have evocative titles, one series alone makes up for that – brilliantly colored, characteristically cartoonish, and embossed to the point of paper abuse, the three prints titled Waiting for Wood (one is shown at left) make too much fun out of a certain pornographic predicament. Or was Dunham merely anxious to get a UPS delivery of supplies? They are wood engravings, after all.
If you still have doubts about seeing this admittedly over-the-top exhibition (and I know I did at first), my advice is to forget about the content (it really isn't the point anyway) and just immerse yourself in the myriad forms Dunham dishes up. It's sure to be a raucous good time.
The exhibition Carroll Dunham Prints: A Survey was organized by the Addison Gallery of American Art at Phillips Academy, Andover, Mass., and runs at the University Art Museum through April 3. A hardcover catalog, published by the Addison, is available at the show for $45 (list price $65). Dunham will give a talk at the museum at 7 p.m. on Monday, Feb 22, as part of the ACT (Art & Culture Talks) series there. 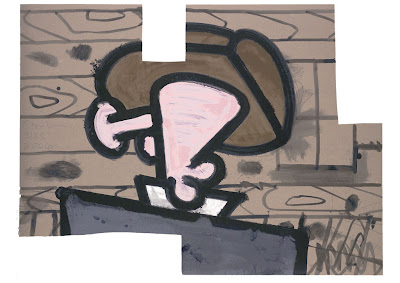 a great reason to visit Albany!