Larry Poons Monkey Liner 2008, acrylic on canvas
Larry Poons is a little, grey man who makes big, colorful paintings. His recent visits to The College of Saint Rose to install a solo exhibition and give an artist's talk stirred up quite a bit of excitement and just as much controversy - not surprising for an old-school enfant terrible whose reputation for pushing boundaries appears to have been well-earned.

The opening reception for Larry Poons: Recent Paintings at the Esther Massry Gallery on Feb. 5 was absolutely packed, as was that evening's talk, and the air was abuzz for days after as scandalized art lovers, their eyes glittering, asked each other if they'd been there or not.

Though I couldn't stay for the talk, I gather that this icon of bad-boy painters fulfilled all expectations with his obscurity and outbursts. I also heard about various moments of provocative behavior during the installation process, further burnishing my impression that Poons has the outsized ego to match his world-famous New York City painter's image (that's him in the photo above, taken by Massry Gallery Director Jeanne Flanagan in front of the 2009 painting La Famiglia).
So, I expected to have a very hard time liking the paintings when I returned to the gallery to take them in (viewing them at the opening, despite their scale, was an impossibility). And, at first, that's how it was: The work felt angry, undisciplined, and unresolved. Still, I knew it couldn't be that simple. Poons requires the viewer to work - not as hard as he does, but harder than we're used to when looking at abstract art.
What happened eventually, as I gave the show more time over two extended visits, was that the paintings began to open up, revealing their depth and - can I bear to write it? - sensitivity. In fact, what had appeared quite ugly to me on superficial inspection started to actually seem beautiful. 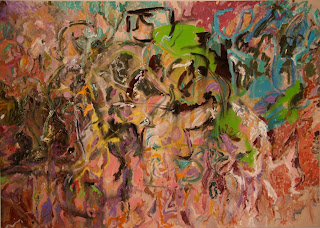 The show includes just 11 paintings (all acrylic on canvas), but they are so big and complicated that the spacious gallery feels almost overfull. Seeing the installation as a whole is extremely difficult, and looking at the paintings from any great distance is fairly useless. Perhaps a different kind of installation that breaks up the space would have helped by forcing a more intimate viewing distance.
From close in - that's where I began to have a better experience of this work. At less than two feet away, one enters the world of the painting, and is immersed in the myriad marks and colors that make up its surface. Not coincidentally, that's also the distance from which Poons most likely would have made the paintings. Entering his point of view, the conflicts that pervade the bigger compositions go away, and the light begins to overtake the darkness.
Once on better terms with the extremely painterly surfaces of these works, it becomes easier to look at them again from further away - the colors that were obscured in the complexity reach out, and the structured aspect of the compositions becomes more apparent. This is of course more true with some than others (such as the painting shown above, titled Playing for Keeps).
My favorite piece in the show best combines both of these characteristics, providing a structured composition that looks good from most distances and imbuing it with the filtered light of a spring garden (shown below, it is titled Grayson 45). Many would argue that this work is only about the painter and the paint, and they could very well be right. But I found, again and again, that staring at these paintings was a lot like having a face full of flowers - a not entirely pleasant feeling, but not entirely joyless, either.
The show continues through March 21 but will be closed for Spring Break from Feb. 28 to March 7. 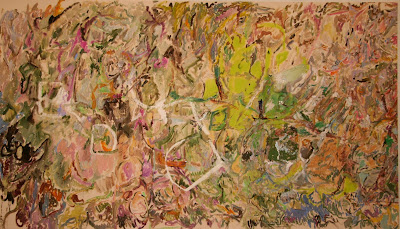 Posted by david brickman at 2:48 PM

Great writing - and review of Poons. You've made me miss my former easy access to "big and real" galleries.

The power of great abstraction still defies rationality - but it's there, and it's undeniable.

I love the review. Art students from Albany High School were required to go see the paintings but since I am nearly buried with AP work, I could not go until March 22nd which was the "take everything down" day. I managed to get in real quick cause my teacher knew Jeanne and I was amazed and at the same time mad that someone can make random brushstrokes on canvas and call it art. Either way, I respected his style and I do have to admit, I liked it. Strange but good. Jeanne gave me your blog name and I decided to check it out. Thank you.

Great to hear from you - I'm glad to know that your art teacher sent you to the gallery to see those paintings, and that Jeanne directed you to this blog.

It sounds like it was worth the trip for you; I hope you will keep looking at challenging art and that you will check back in with Get Visual to share your views when you have time.

Good luck with your schoolwork,
db