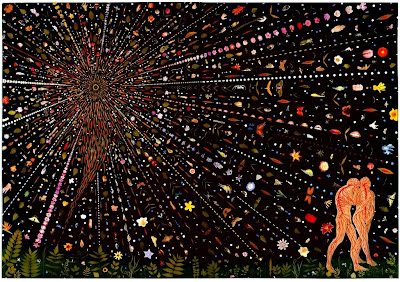 Note: This will be the first of two reviews from Saratoga Springs. The second, on the exhibition Natura at Saratoga Arts, will post in several days

It's not often that an exhibition by a major artist goes on view in our region before heading to New York, but that's the case with the Fred Tomaselli survey, which will travel to the Brooklyn Museum after its current showing at Skidmore College's Tang Teaching Museum.

Tomaselli is an immensely likeable artist whose work captures a nice chunk of the American zeitgeist from his (and our) times by drawing freely from sources as broadly spaced as Western landscape, catalog marketing, shamanistic drug culture, Persian rug designs, and Renaissance painting, and then riffing on them in layers of diverse media. Perhaps there are others who also make art out of plant leaves, pills, photo collage, acrylic paint, and resin - but if there are, they will always be compared to Tomaselli as the original.
For those who aren't familiar with his oeuvre, this exhibition is the ideal introduction. Co-organized by the Tang and the Aspen Art Museum, where it previously showed, the mini-retrospective covers a range of about 15 years with 30-odd pieces, most of them significant in scale, and includes several seminal smaller works that give very useful perspective on Tomaselli's evolution as an artist. 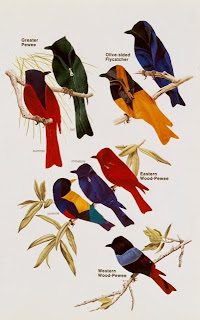 The earliest pieces date back to about 1990 and are quiet, thoughtful, photogram-based black-and-whites that introduce the theme of drugs (or rock bands) as a proxy for identity. Three from 1995, titled as individual portraits, present carefully labelled constellations of substances (caffeine, Prozac, LSD, etc) that the subjects have ingested. These are strong pieces on their own but also provide a window into Tomaselli's more ambitious pieces, in which psychedelically fractured humans toil against a backdrop of cosmic blackness and brilliant energy (such as the untitled image shown at the top of this post).
Other works are more pattern-oriented (see Echo, Wow, and Flutter at the bottom of this post), perhaps as a response to issues on abstract art's attempts to be universal (i.e. non-specific). They're impressive, but I prefer the images that depict individual Everymen and women, especially because they do it somewhat awkwardly and are therefore poignantly true to life.
Tomaselli is also deeply involved with nature as a subject, mostly represented by birds and plants. A 2003 series of Field Guide pages, elegantly transformed by cutting out and replacing the birds with colorful printed images of fleece or down jackets (example at right above), makes a clear, humorous cultural statement while simultaneously demonstrating the appeal of collage as a medium.
My one concern in viewing this show was that Tomaselli's most important pieces, despite being sealed under thick layers of clear acrylic resin, are visibly deteriorating. Plant leaves that started out relatively green and fresh (as seen in reproductions in the accompanying gorgeous tome of a catalog) are now golden brown; cheap pills, such as Tums, that once provided playful pastel color notes, are fading and crumbling. It's likely that the artist expected these changes and considers them an integral part of his process, but one misses the strength of the original colors - acceptable in a 400-year-old fresco, but worrisome in an otherwise carefully made work of art from the 1990s.
Fred Tomaselli is on view at the Tang through June 6. See it, and also check out the wonderful works on paper and sculptural installation by Cuban duo Los Carpinteros, which opened on April 8 and will be there through Aug. 8. 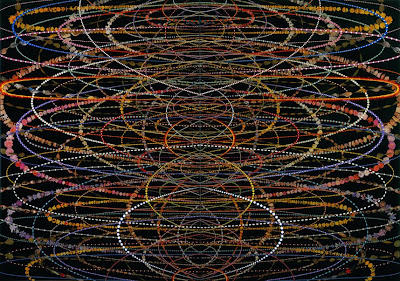 Posted by david brickman at 9:49 AM

Thanks for mentioning this show, I was looking for an opportunity to go back to Tang.