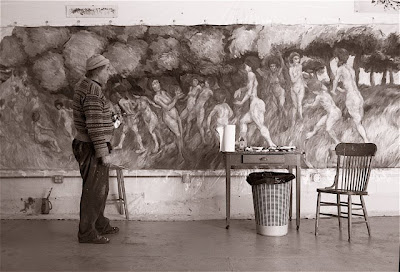 William Karpowicz in his studio, 1992 - photo by Ron Force

I was greatly saddened to learn of the death on March 29 of longtime Albany artist William "Bill" Karpowicz. For many years, until we were all thrown out in 2006, Bill occupied the studio opposite mine on the third floor of 116 North Lake Avenue (now a charter school).

There, Bill made painting after painting of "his angels," crediting them with keeping watch over him. When it was clear he'd have to leave the big studio and move into a much smaller space, Bill destroyed all the larger paintings he had accumulated. He didn't see any other option. I was very worried about Bill's state of mind at the time, but he seemed to accept the situation, and I think he eventually found a new rhythm in his smaller digs across the street from the old building.

Leukemia took his life - presumably, he's with the angels now.

Note: The following reminiscence was provided to Get Visual by Ed Atkeson.

I was with some art pals once and someone commented, "What about Karpowicz? Isn't he the real thing?" Sort of like, "Why isn't anyone paying attention? Why isn't he famous?"

Bill painted and painted. After a while he seemed to specialize almost exclusively in angels. He had a big easel with one foot of the easel carved into a cloven hoof, and there was always a painting on it, in progress. He also made model steamboats and remote control sailboats and hand-launch gliders. He had made an enormous fish sculpture that hung in the studio, but mostly paintings, oil paintings of angels. 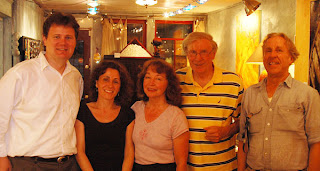 Cathy and I have one of the angels. We showed Bill's work at our Firlefanz Gallery on Lark Street

in July 2005 and he gave us one. The show was called "Angels and Other Spirits," and also included Bob Cartmell, Regina Capobianco, Sylvie Kantorovitz, and Gail Nadeau. (Here's a picture of the artist interview by Timothy Cahill - that's Tim on the left and Bill on the right.)

I think I first met Bill in Washington Park, it was so long ago. He was tossing hand-launch gliders. Balsawood, he'd made them himself. They were pretty remarkable: for one thing, the little planes worked so well that they would just fly away. Bill rigged them with a fuse that would trigger an airbrake after a few minutes - he would light the fuse with a cigarette and give the little plane a toss.

I'd never seen anything that flew so well. Everything was made so carefully. The wings had a perfect airfoil carved in. I was at his house and asked how he made them and there were no plans, he just made them. How? I was amazed. Then I noticed that he had about a dozen of them sticking out of a can on a shelf! He gave me one and I still have it.

Bill moved into my neighborhood for a while and I would drop in to see him. Once I noticed that he'd made a painting of a street person that we all knew and it looked exactly like him. I asked about it and it turned out that there had been no sitting, Bill had painted it from memory. I asked, "Bill, how can you do that?" He just shrugged and said, "painter's eye."

I remember a big Karpowicz painting on display at Cathy's 50th birthday party at Time and Space Limited in Hudson, 1994. The painting was some sort of ancient Sumerian imagery or something like that, 8 by 10 feet. Not for sale, it was much admired. Bill would put out xeroxed cartoons commenting on issues around the city and neighborhood, I still have a bunch, and we got some very unusual Christmas cards from him.

Bill was a good guy, a hard worker with a lot of talent and a big heart. He was the "real thing." He will be missed. 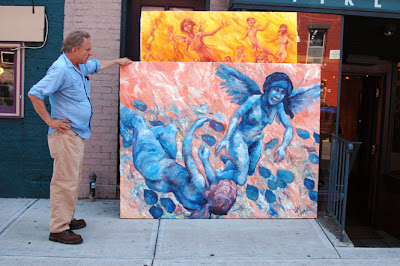 So sad to hear about Bill. I loved seeing his work when I visited you at the studio.