"The Reality Show" at Siena College 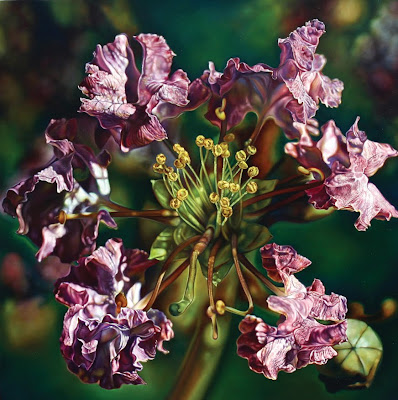 Crape Myrtle - oil on canvas by Chris Murray
Two artists who favor realism are paired for a showcase at Siena College's Yates Gallery through April 30th. The Reality Show: Works by Chris Murray and Jon Gernon doesn't break any new ground, but it is a tidy little concentration of work by two artists who have been deservedly gaining increasing exposure on the local scene.

Not entirely coincidentally, Gernon is the curator of Clement Art Gallery in Troy, where Yates Gallery curator Sergio Sericolo is currently featured in a fine two-person show with Wendy Ide Williams. Yes, it's a smallish community of artists and curators who mostly know each other, but that can be true in very big cities, as well, and is entirely natural. Who else are they supposed to hang out with?

Gernon is a good, old-fashioned drawer and painter, and the show presents a total of eight of his pieces: five in graphite, one in primary pastels, and two in full-color egg tempera. All play visual, symbolic, and spatial games, such as Bowl of Cherries, a drawing that renders the titular bowl in sharp black and white, with a trompe l'oeil print of a bird hanging behind it, such that the bird appears to be perched on a cherry stem. 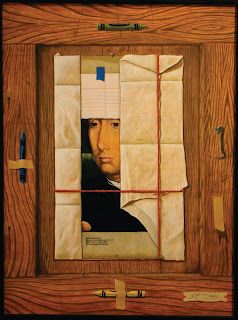 The pastel, a study for a painting, prominently features a yellow rubber duck and a snippet of a Mondrian picture (misidentified as a Morandi) in a clear bit of red-yellow-blue playfulness. One of the two tempera paintings plays a similar game with trompe l'oeil crayons in blue, yellow and green (with a title that makes reference to color mixing - and shown at right).

My favorite piece by Gernon in the show is a 2009 egg tempera titled Still Life with Botticelli, where odds and ends of the Italian artist's works are represented by pencil sketches on Post-Its and a color postcard, which, along with several colorful crayons, are masking-taped to a tall, narrow, white-painted board. Except they're not - it's all painted in trompe l'oeil again.

Murray is also a very skilled painter who likes to fool the eye, by imitating the look of a color photograph (right down to the out-of-focus areas) while maintaining a great degree of painterly effects, visible if you study them closely enough. His five pieces in the show are inconsistent in style, which would be a serious problem in a bigger or more prominent show, where you would need to clearly see and understand the vision of the artist.

In this case, a sampler is OK, as the quality of the work is so high that each painting can stand alone. Two of them depict flowering trees, but in contrasting ways. The hexagonal arrangement of a big blossom in the 4-foot-square Crape Myrtle (shown at top of post) is really a straightforward depiction of its subject - but a similarly sized vertical painting titled Blossoms, realistic in its way, does far more to transform the subject into something we wouldn't otherwise see. It is cropped, abstracted, almost liquefied, and therefore more successful as a work of art.

The other Murray painting in this selection that holds our attention is a 2-by-3-foot portrait of the artist Robert Gullie. Searing in its Chuck Close-like details of whiskers and veins, it is also masterfully smooth in its color selections and transitions. Beyond that, it is a portrait in the real sense: Gullie's clear blue eyes gaze out at us, and his penetrating expression draws us in.

There will be an artists lecture and reception for The Reality Show on Thursday, April 15; the talk is from 4:00-4:30 p.m. in the library basement, room L26, and the reception will follow in the gallery on the second floor, ending at 6 p.m.
Posted by david brickman at 3:30 PM