Andrew Wyeth: An American Legend at The Hyde Collection 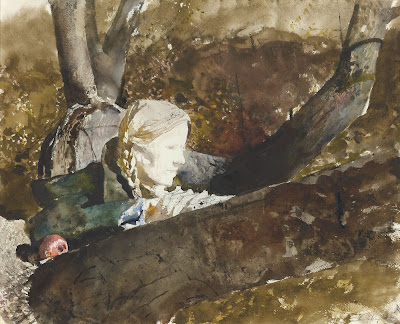 It is, once again, a summer of blockbuster exhibitions in our region; not to be missed among the wealth of fine choices is Andrew Wyeth: An American Legend at The Hyde Collection in Glens Falls through Sept. 5.
Built upon the seemingly slight foundation of a single early Wyeth watercolor from the Hyde's collection, the show brings in a trove of major and minor works, making 46 in all, from various sources, including a commercial gallery, several museums, and two private collections. Curated by the Hyde's new director, David F. Setford, and deputy director Erin B. Coe, the exhibition was produced in conjunction with Maine's Farnsworth Art Museum, which provided the great bulk of the loaned works.
The result is a stunning display of masterful and at times provocative work by an artist as controversial as he was popular in his long lifetime (he died last year at the age of 91). Many warm easily to Wyeth because his work has a realist look to it - his ability to create the illusion of verisimilitude with a few strokes of a watercolor brush was unparalleled - but the show makes a convincing argument that far deeper and darker impulses guided this seemingly representational artist.
Grouped into four broad themes (Regionalism, Architecture and Interiors, Magic Realism, and Wyeth's Models) the Hyde exhibition provides plenty of useful notes (written by Setford, and available in a very reasonably priced and nicely produced color catalog) to guide the viewer without imposing too much on one's direct appreciation of the work. This is good, as the great majority of the pieces are watercolors on paper, a medium in which directness is paramount.
The watercolors are augmented by several well-chosen pencil sketches and a significant handful of temperas on panel, Wyeth's other signature medium. For my money, it would do to spend the most time with those more finished paintings, plus a few of the best watercolors, and go away sufficiently dazzled. After all, if you're really looking, a few choice masterpieces will wear you out - and this show has the masterpieces.
Begin with the almost painfully understated, nearly abstract composition titled Cooling Shed, and you will see much of what makes Wyeth a pleasurably persistent problem in American modernism. The painting (a tempera) is a narrow vertical, only about a foot by two feet, with a wide, flat, deep, dark frame that could be barn wood. Within that slice, Wyeth has engaged his love of mystery - light and dark collide there - and his confounding realism made almost minimalist by severe cropping.
An abstracted scene of fragile Americana, the 1953 Cooling Shed is anything but simple or simplistic. The Hyde has intelligently presented nearby a reproduction of a 1938 painting by Charles Sheeler (famous for early abstract photographs and paintings of American subjects) that resembles both Wyeth's painting and Marcel Duchamp's notorious Nude Descending a Staircase; this juxtaposition makes the point visually that Wyeth is also not an artist to be trifled with.
Wyeth's own words on Cooling Shed ("I was thrilled to find such abstraction in the everyday.") belie the degree of difficulty he would have encountered in creating a work of such potent subtlety and transcendence with the merest of materials.
Equally transcendent, the largest painting in the show is also a tempera on panel, one that nearby notes explain did duty as an electric train table for Wyeth's kids before he revived the nearly 8-foot piece in 1950 (it was begun in 1942). Soaring depicts a bleak, coastal farmscape from the point of view of a group of turkey vultures that wheel high above it at a dizzying angle.
Here, as in many other works in the show, "the imminence of death" is a theme that Wyeth explores unblinkingly, while tying it to a quiet but palpable joy. It is this distinct brand of New England stoicism that is most characteristic of Wyeth's work and that I think is the key to its popularity. Even Wyeth's most colorful works (notably among the earliest) are subdued; and most of his work borders on the colorless. Where he does go bright, it is almost always in the direction of a deep blue. The rest of the time, brown dominates.
Aptly, the Hyde's galleries are painted brown and blue for this installation, a design that works well to set the tone for contemplation that this work so clearly demands and deserves. Is it a pleasure to contemplate death? Well, yes, Wyeth seems to be saying, so long as you are eluding it, and not making too great a show of yourself as you do.
This active avoidance of decay is an essential ingredient in the artistic life, and it is exemplified by the secretive production of Wyeth's Helga series, represented in this show by three watercolors (two from 1973, both of which are titled In the Orchard, are reproduced at the top and bottom of this post). Though these are not among the best Helga paintings, it is important that they are included as a representation of Wyeth's daily practice.
Far better are the pencil studies of his other most famous model, Christina Olson; superb as they are, though, they can't quite make up for the absence of Christina's World, the 1948 painting that made Wyeth's name unforgettable. I suppose the Museum of Modern Art in New York City refused to lend it.
Instead, a piece that clearly paved the way for Christina's World is on view, and it is a fine substitute. Titled Turkey Pond, the 1944 tempera depicts a dark figure in hunting garb, but with neither gun nor dog along for the trip, his purpose in walking across the vacant meadow is lost. It is as good an image of existentialism as you will find anywhere.
NOTE: The estate of Andrew Wyeth strictly prohibits the reproduction of his images on the Web; the two images reproduced here are courtesy of Adelson Galleries, New York. 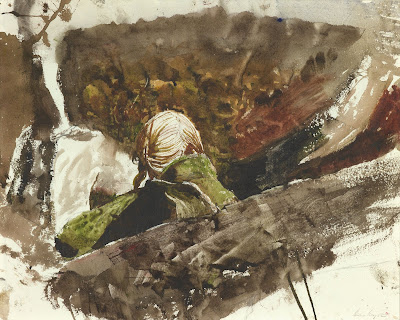