Picasso Looks at Degas at the Clark Art Institute 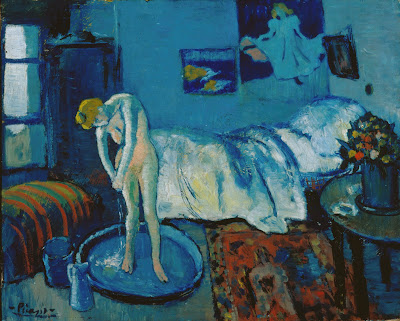 It's the much anticipated, must-see exhibition of the season, and Picasso Looks at Degas at the Sterling and Francine Clark Art Institute does not disappoint. Having brought together a stellar selection of masterpieces and lesser-known curiosities from around the globe, for an exhibition that will not be seen elsewhere in North America at any time, the Clark has an unqualified triumph on its hands.

Who cares if the thesis of the show is little more than an academic footnote to these two artists' transcendent careers? Any excuse to put such treasure a short drive from my backyard is good enough for me! There's no doubt many people from much further away than that will be more than delighted to come and sip from the deep well that Edgar Degas and Pablo Picasso plunged into, separately but similarly, well over a century ago. 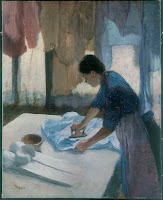 Not that the show's thesis is meaningless or mistaken. Picasso, the great, self-described thief, stole freely and gleefully from the master of his father's generation, in whom he clearly recognized a kindred spirit. His earliest work follows a markedly similar trajectory as that of Degas, and his latest work directly imitated and celebrated a specific series of prints by Degas, posing Degas himself as their protagonist. Point made.

A problem with the exhibition is that it begins by forcing juxtapositions one could find in almost any two serious artists' early work - nude studies, self-portraits and the like - which slightly undermines the almost astounding connections revealed later on. Equally, one grows tired of the repetition of the concept, which becomes an insistent drumbeat that won't let up. Degas painted his sister - Picasso painted his sister; Degas hung out with folks in cafes - Picasso hung out with folks in cafes; Degas loved women - Picasso loved women; and so on and on. We get it, and after a while we get sick of it.

But we don't get sick of the art. Expertly and beautifully installed in five galleries (one downstairs, the rest above), delectable tidbits from private collections join celebrated works in a well-calibrated crescendo of knockout groups and juxtapositions (the show was co-organized by the Clark and the Museu Picasso in Barcelona, both of which contribute many works from their collections).

Colors are carefully employed for maximum effect - the largest space (nicely broken up by angled walls) is painted a creamy white, creating an open flow for works in extremely diverse media and every scale, from tiny drawings to large paintings and sculptures. The other spaces, in dark gray, sage green, and carmine, create intensity and intimacy for the more concentrated themes of the early years, the dance, and the brothels.

Hindered only by the unavoidable hips and elbows of the crowd, a viewer can revel in this smorgasbord of brilliant work depicting nude bathers, dancers, denizens of Parisian nightlife, domestic servants, and the artists' friends and family members. Everywhere are signs of riveted attention and masterful ability. Both Degas and Picasso started out strong and remained strongly committed, constantly honing their ideas and techniques while allowing their native skills with line, form, and color to flourish. 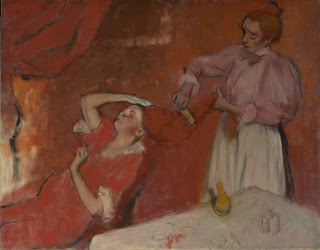 Most of the other highlights of the show come in pairs. A Degas cafe scene (borrowed from the Musée D'Orsay in Paris) joins a similar Picasso from his blue period (on loan from the Los Angeles County Museum).

Two paintings, each titled Woman Ironing, demonstrate the direct influence of Degas on Picasso; that of the former, painted at the height of Impressionism and having been displayed in a gallery that Picasso frequented, became the template for Picasso's 1904 effort, a grippingly modern interpretation. Their permanent homes, at the National Gallery in Washington, D.C., and the Guggenheim Museum in New York City are relatively close together, but not exactly side by side as one sees the pieces in this exhibition. 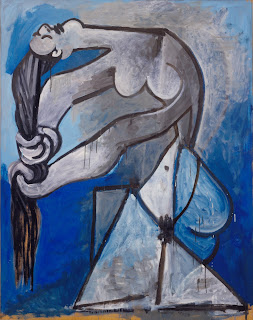 Nearby, two exquisite portraits hanging politely distant on a large wall, are strikingly similar - in this case, not because Picasso had previously seen the Degas, but because each artist was strongly influenced by the Spanish painter Francisco Goya in making it.

And in the highlight of highlights, equal-sized paintings in cleverly contrasting colors face off on the white gallery's last big wall, with plenty of room to let them breathe. Degas' is horizontal and shows a woman combing her daughter's thick, red hair. Now part of the collection of The National Gallery in London, this gorgeous painting once belonged to Picasso's friend Henri Matisse, at whose home he surely had the opportunity to study it.

Picasso's response, a vertical 1952 painting on loan from a private collection, is done in grays and blues in his signature mature style and displays a statuesque woman wringing her hair. Just being able to exploit the unique opportunity to peruse and compare these two pieces directly is well worth the $15 seasonal price of admission to the Clark.

Picasso Looks at Degas is open every day (closed Mondays after Aug 31) and remains on view through Sept. 12. Also of interest is a rare installation at the Clark of contemporary art by the recently deceased Spanish sculptor Juan Muñoz, which places his works in the context of the Clark's permanent collection, as well as in the new Stone Hill Center's galleries. 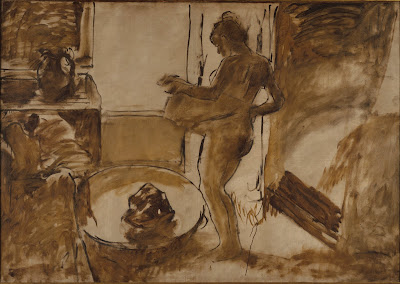