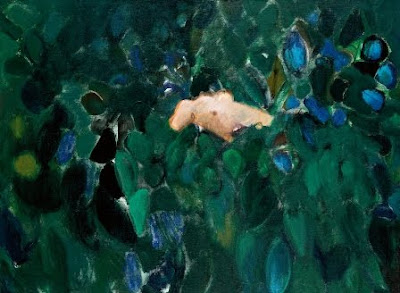 Based on his current exhibitions in Albany, there are at least two John Ransom Phillipses - and that doesn't take into account his purported past lives in Europe and Egypt. The pair of shows by this mysteriously motivated painter at The Sage Colleges' Opalka Gallery and the Albany Institute of History & Art combine to present some 50 works of art from an even larger body that focuses on the Civil War and its most famous photographer, Mathew Brady.

While Phillips claims to have formerly been a 16th-century Dutch painter, he does not expressly state that he thinks he was also Brady - but he clearly identifies with the celebrated icon of 19th-century photography, as well as with his contemporary, the poet and battlefield nurse Walt Whitman. 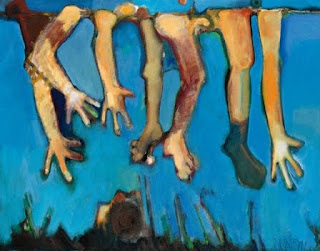 I'm used to artists, so the nuttiness factor isn't all that offputting here; neither is the prospect of trying to apprehend a multifaceted vision in bi-polar fashion across a few miles of my home city. But the complexity of the work itself does challenge - Phillips paints in oil on canvas and in watercolor on paper, using stylistic sources almost as diverse as all of modern art. To quote from the Institute's wall text, which in turn quotes from a book-length essay by Alan Trachtenberg, "Phillips re-imagines the story of Brady's life within ... work [that] combines elements of colorist expressionism, surrealism, abstraction, pop art and cubism."
As seen in these two shows, Phillips also takes two clearly divergent approaches to this process. Titled Ransoming Mathew Brady: Searching for Celebrity, the Opalka show features larger works that concentrate on Brady's studio activities, often depicting camera equipment, props, and sitters in a quasi-theatrical setting. The Institute's selection, titled Ransoming Mathew Brady: Re-Imagining the Civil War is all about the battlefields and the men who lost life and limb upon them. 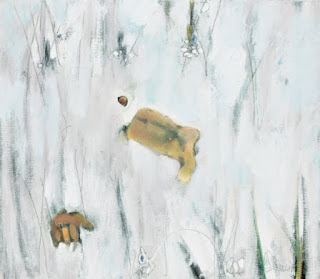 This dichotomy is successful in forming two relatively coherent exhibitions that are nonetheless closely tied, but it does require the interested viewer to make two stops. I would recommend seeing the Opalka show first (as I did) because I think the Institute show is better and you'll want your experience to improve as it goes along.
Then again, the Institute show, though it has more paintings in a trickier space, is much easier to follow and take in as a whole, while the Opalka show, with several extremely complex, multi-panel pieces, is far more difficult to understand. So it might be easier to take the reverse approach and warm up with Civil War before attacking Celebrity. I can't say for sure because, being only one person, I couldn't try it both ways (though I wish I could have, just to see what would have happened). 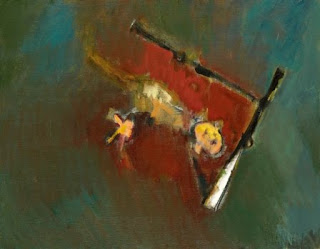 What did happen when I innocently wandered into the Opalka show, having never laid eyes on a Phillips painting before, was that I became persistently perplexed. The gallery's exhibition coordinator informed me later that Phillips has a doctorate in symbols, which didn't surprise me one bit - I believe you might need one, too, to fully understand this work.
The Institute show, on the other hand, is quite relaxing (visually speaking). Dominated by several very nearly abstract images with beautiful passages of pure paint, its messages are clear but mainly quietly stated; this aspect of Phillips' painting is more dream than nightmare. That said, there are some rather disturbing images here, even if they are sometimes presented in a rather cartoonish style (more on that further down). 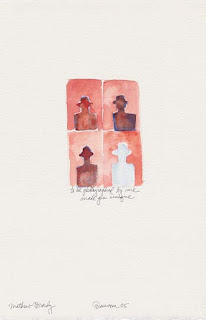 In both exhibitions, the watercolors function as a sort of primer, providing a window into Phillips' thinking process with inked words, most of them quotations from Brady. The watercolors also act as a bridge between the two shows, linking them stylistically and conceptually. They are done in a loose way that is better suited to the direct medium painted small on paper than it is to the layered medium painted larger on canvas or linen.

And that constitutes my main objection to this painter overall. While many of the watercolors feel cartoonish in their essence, it is difficult to take work seriously that depicts its main subject (Brady) as a silly-looking figure not much more expressive than a doll. It's also annoying (for me, anyway) when the comic-strip convention of rendering hands and feet with four digits rather than five is applied to museum-bound art in the form of otherwise well crafted and ambitious paintings. When Phillips trivializes the subject in this way, I am left with more perplexity.

NOTE: The Opalka Gallery exhibition is officially open through July 30, but has been extended a week through Aug. 6. The Albany Institute exhibition runs through Oct. 3. For hours and contact information, check the web sites (linked above).